The 2019 Tony Awards unfurl Sunday, April 9, yielding eagerly awaited answers to pressing questions: Hadestown or Tootsie? Oklahoma or Kiss Me Kate? And what about Jeremy Pope, who’s nominated for Best Leading Actor in a Play (Choir Boy) and Best Featured Actor in a Musical (Ain’t Too Proud)?

Sofitel New York doesn’t have the answers (yet). But their lobby, decked out in full Tony regalia through June 10, is a great place to put yourself in the mood for the Tonys if you don’t have a ticket for the big show at Radio City Music Hall. 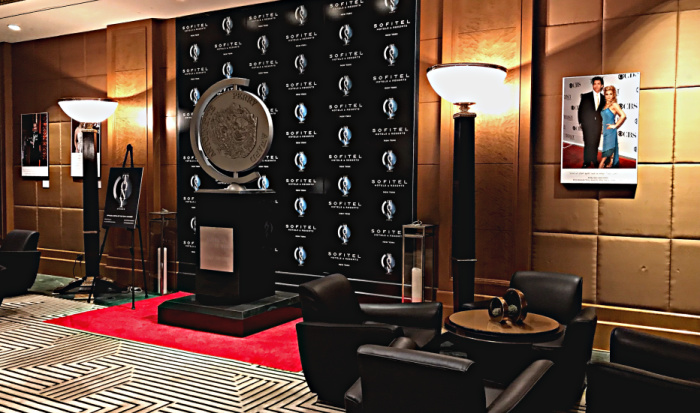 For the second year in a row, Sofitel is the official hotel of the Tony Awards. Lest there be any doubt, the elevator doors sport the TONY logo top to toe, photos of Broadway shows like The King and I backdrop the concierge, and an enormous replica of the award is perched on a red carpet, selfie-bait for theater lovers.

The showpiece is “Celebrating Our Love of Broadway,” a colorful photography show that fills the lobby with images of exuberant Tony nominees — Hugh Jackman, Neil Patrick Harris, Andy Karl and Orfeh, among others — along with their hand-written comments about the big event. “Looking at this picture I’m drawn to the beautiful smile of my wife,” writes Lin-Manual Miranda below a photo of himself with Vanessa Nadal from June 12, 2016, aka Hamilton Night.

The lobby is airy, welcoming and home to changing art shows year round, a pleasant place to sink into a club chair and admire the flower arrangements if you’re in the area.

There’s more Tony revelry upstairs, but it will cost you. For the second year, the hotel offers a Tony Awards Suite boasting a terrace with views of the city and Tony memorabilia — award-winning scripts, a Tony awards songbook, opening night photos, invitations and Playbills from 1960 and beyond. The star treatment extends to personalized embroidered towels, pillows and bathrobes and a 1996 Tony poster by Frank “Fraver” Verlizzo, who created posters for such shows as Sweeney Todd, Follies and Deathtrap. Priced from $2,000 a night, the Tony Suite is available through September 4. 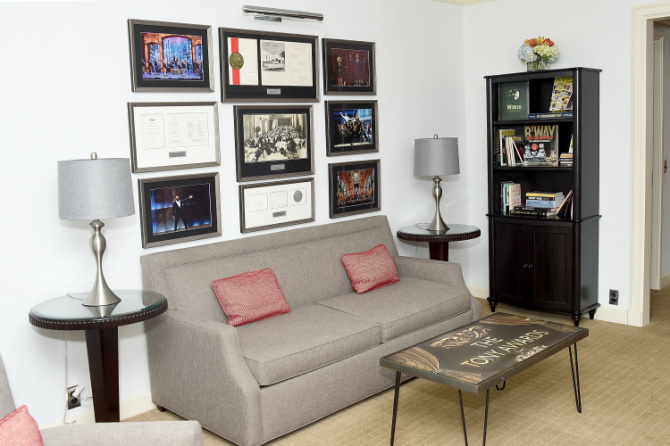 If you prefer a splash of Pride with your Tonys, Sofitel rolls out the Cher Show Suite from June 10 through September 15. In place of the hotel’s usual Eiffel Tower photos look for a Cher Show poster signed by the cast, a Time Magazine cover signed by Cher and Bob Mackie, Cher portraits by Al Hirschfeld and original costumes from The Cher Show. Yours for $499 (and up). Bonus: the hotel bar will offer a Cher-themed specialty cocktail, “Turn Back Thyme,” with a percentage of sales donated to GLADD.

W Downtown Dresses Up Their Bar With Art By Their Newest Artists In Residen... Dig In! A Record 48 Hotel Restaurants Fork Over Deals On Meals During New York...
Scroll to top