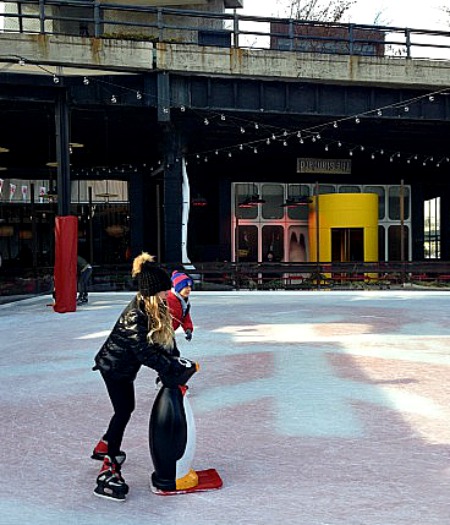 Ice skating at the Standard

Ah, the crisp, chill days of December. They may not be here yet, but they’re coming. And with them our thoughts turn to salchows, toe loops and flips – or more realistically, trying to not to belly flop on the ice.

Each winter outdoor rinks sprout up throughout Manhattan. Never mind that we’re talking frozen concrete instead of frozen ponds; concrete is urban poetry.

The Standard Hotel rink is back along with stalwarts like Bryant Park’s Citi Pond, the Rink at Rockefeller Center and Wollman and Lasker rinks in Central Park.

So liberate your inner Yuzuru Hanyu — or Adam Rippon. Here’s where to check in if you crave skating and the city – or just want a rink-side hotel that will warm you up with hot chocolate, or something stronger, après skate.

Making every inch count in a space-starved city breeds cleverness.  Witness the ice-skating rink on the plaza in front of the Standard hotel, the same square footage occupied by a fleet of tables and chairs in warmer weather. At 3,000 square feet, the rink is a beauty, as stylish as the hotel with strings of lights and big red snowflakes on the railings. Bonus: You get to skate under the High Line elevated park. We love the black and red Tyrolean-inspired haus, a hip riff on Heidi, were you check in (adults $12, kids $6) and rent skates if you need them ($3). A second haus abuts, serving up powdered sugar crepes, hot chocolate, hot apple cider, eggnog and capuccino as well as stronger stuff like bourbon, brandy or dark rum for spiking a toddy. If that won’t warm you up, hanging space heaters above the seating area will do the trick. One curiosity: no music; you move in silence, like Ashtanga yoga.  Open daily from 10 am weekdays, noon weekends, until late.

Not many hotels offer the the Bryant Park Hotel’s signature perk: a window view of an ice-skating rink. Select rooms overlook Bryant Park, the plucky urban green behind the New York Public Library. And through February 26, the park’s big attraction is Citi Pond, a 170’ by 100’ rink with free admission (skate rentals cost $14 but you can, of course, byo). Open 8 am to 10 pm Sundays through Thursdays, until midnight Fridays and Saturdays, the rink attracts a crowd, especially at lunch. You can check it out whenever you like on the web cam. But nothing beats seeing it in person. Food abounds including Celsius, with outdoor rink-view terraces warmed by heat lamps, and ‘witchcraft, the stylish sandwich kiosks dotting the park.  At the hotel, the adult, and atmospheric, Cellar Bar, whose tile ceiling rivals that of Grand Central Station’s Oyster Bar, serves up stylish post-skate drinks.

It may not be the city’s biggest, but if you want a career with the Ice Capades – or just want your double lutz to get noticed – wouldn’t you skate at the Rink at Rockefeller Center? You’ll pay for the privilege, especially on weekends (adults $19, kids $10.50). But how often do you get to skate under The Tree? Rockefeller Center food and snack haunts abound, including a Starbucks on the lower level.  At the New York Palace, a mere two blocks from the ice, the festive Holiday Fantasy Brunch, available on weekends noon to 2:30 pm, serves up a la carte specialties for adults (lobster rigatoni, egg white frittata) and kids (ginger-scented pancakes, mac and cheese) and desserts like Prancer’s pumpkin cheesecake and North Pole ice cream.  The rink, btw, is open Monday through Thursday 9 am to 10:30 pm, Friday and Saturday 8:30 am to midnight and Sunday 8:30 am to 10 pm.

You’ll fight your way through the crowds, but Wollman Rink at the southeast end of Central Park is a great place to skate. It’s big, more like a frozen lake than a pond. And the urban landscape of skyscrapers and trees will have you humming Gershwin – or Alicia Keys. The towering Pierre hotel, more or less across the street, was just 19 years old when Wollman opened in 1949. Wollman isn’t known for food, so the Pierre is an obvious choice if you crave a hot chocolate – or hot toddy — in stylish digs to celebrate a perfect triple toe loop.  Besides nibblrds, the Pierre’s Two East lounge temps with a special menu of seasonal drinks. Wollman is open daily from 10 am to 2:30 pm Monday-Tuesday, 10 pm Wednesday-Thursday, 11 p, Friday –Saturday at 11 pm and 9 pm Sunday. Adult admission ranges from $10.75 to $16, kids $5.75 to $6; skate rentals $6.75.

Compared to style demons like Rockefeller Center and the Standard, Lasker is a brute, a frill-free 1966 creation more pragmatic than poetic. Still, this plucky rink at the northeast corner of Central Park gets the job done. The ice is hard. The price is right ($6.75 adults, $3.75 kids). And the rink is rarely overcrowded (beginners can stumble without getting run over). It’s also versatile; in the summer it morphs into a swimming pool. And beauty is nearby, namely Harlem Meer, a gorgeous pond stocked with fish. The nearest hotel is a hike. Aloft Harlem is 12 blocks north, but it’s wxyz bar is welcoming after a day on the ice. And its grab-and-go serves up coffee, tea and cookies. Lasker opens daily from 10 am to 2:30 pm Monday- Tuesday, 10 pm Wednesday-Thursday, 11 pm Friday-Saturday and 9 pm Sunday.

Help! I Need a Room For A Last-Minute Summer Visit
Is that Hotel a Christo? The New York Palace Gets Wrapped
Forget Aspirin and Band-Aids — Hotels Look to High-Concept Shops To Entertain Guests, Lure Locals And, Yes, Make Money
The Paramount Tweaks its Signature Lobby — Again
A Taste of England: Kedgeree at the Ace Hotel
Style Arrives on Kenmare Street: A First Look At The Nolitan Hotel
4 replies

A Fleet of Gingerbread Houses Salute on the Holidays at Le Parker Meridien The Standard Gets Its Close-up In “Shame,” Michael Fassbender’s...
Scroll to top