Ever since The Standard opened in 2009, looming high over the High Line and West Side Highway with its floor to ceiling windows, it’s been waiting for its close-up. At last, the sleekly sexy hotel — and its windows — figure prominently in a new movie, and wouldn’t you know, it’s rated NC-17? 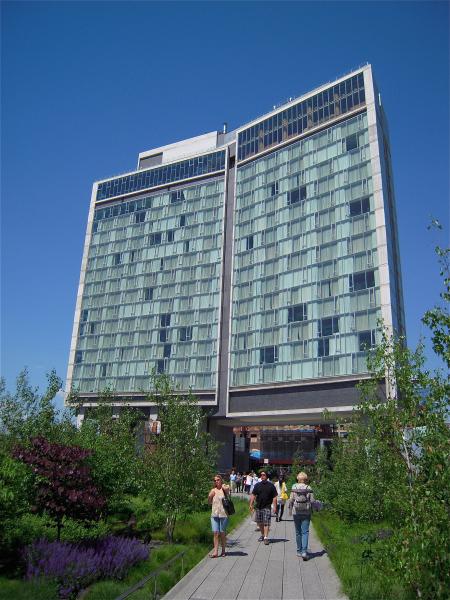 Shame, the unsparing film with Michael Fassbender as a sex addled bachelor prowling Manhattan, features a prominent scene in a corner room at the Standard.  For anyone who ever wanted a peek behind a door, the chicly contemporary Roman & Williams décor (and lots more) is on view – the clean lines, white walls, wood paneling and quiet luxury, with a large flatpanel TV in front of a window.

The curtains, of course, are wide open. Unfortunately, the view of the Hudson and downtown Manhattan is hampered by fog, especially early on. We weren’t sure whether to read something into this. Did the fog symbolize the confusion simmering in the tormented character played by Fassbender? Or was the movie simply shot on a foggy day?

As for those notorious windows, they’re made from iron-free glass, which is extremely transparent with no green tinges. Todd Schliemann, the hotel’s architect, has said the window glass is like a funny one-way mirror because of its transparency.  “You feel no one can see you.” That’s not the message we get from Shame, but hey, it’s just a movie.

Only the Photos Remain: the True Blue Lobby of the Mondrian SoHo
Where Would Will and Kate Go If They Were In Town? New York’s Hotels Battle It Out with Fancy Royal Wedding Breakfasts
Three NYC Hotel Designers Discuss Their (Gorgeous) Handiwork at the Museum of the City of New York
Best of the New: What We Saw And Loved at NYC Hotels in 2011
A Big Dog and a Big Boy: The New York Palace and The Standard Roll Out Sculpture Under the Sky
Your Hotel Doesn’t Have a Spa? No Worries — Select Spa-less Hotels Now Offer Treatments
13 replies