New York boasts no shortage of thriving historic hotels, from the Pierre and the Algonquin to the Waldorf Astoria. But the casualties on the ghost list can be almost as noteworthy, even on occasion, newsworthy.

Consider the fabled Barbizon Hotel for Women. An up-market version of the Footlights Club in Stage Door, the city’s premiere single-sex hotel flourished through the mid 20th century as the ultimate career girl sorority house where anxious parents parked white-gloved daughters aspiring to be models, actresses, writers and secretaries. 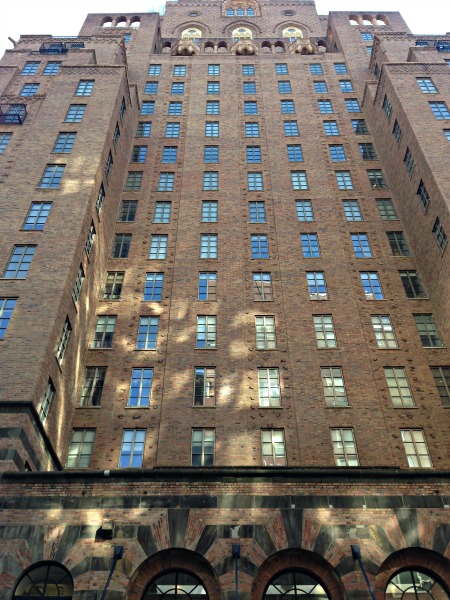 Condos inside: the Barbizon today

Joan Crawford, Lauren Bacall, Grace Kelly, Candice Bergen and Liza Minelli stayed here. So did Ann Beattie, Mona Simpson and Joan Didion. Sylvia Plath, another alum, dubbed the place the Amazon and gave it a starring role in her novel The Bell Jar.

And now, 30 years after the one-time “Residence Club for Professional Women” became a conventional hotel accepting women and men, and six years after it was reborn as Barbizon 63, a luxury condominium, the building is in the news. Following a hearing in late July, the Landmarks Preservation Commission is reviewing a request to grant the Barbizon landmark status.

Built in 1927, the 23-story powder-pink and coral brick and limestone tower blends

Romanesque, Gothic and Moorish influences, sports a topknot of terraces demarcated by Moorish arches and is already listed in the National Register of Historic Places. While prestigious, the register is largely “an honorary designation,” says Tara Kelly, executive director of the Friends of the Upper East Side Historic Districts, the group leading the campaign to award the hotel landmark status.

A nod from the Landmarks Preservation Commission carries clout. Should the owners wish to alter any aspect of the building’s Jazz Age exterior, from the lead-paned windows to the wrought iron balconies, a public hearing is required. Why bring this about now? Last year the boundaries of the historic district were extended, but the Barbizon, which stands just outside of the lines, missed the cut, prompting the current campaign.

The odds for a landmarked Barbizon look good. In addition to architectural import, cultural significance factors in when landmark status is conferred. “The Barbizon is a great example of the two meeting together,” Kelly says. Its cultural value hails “not only from the many famous women who lived in the building, but from the hundreds of everyday women coming to the city looking to make something of themselves.”

The Barbizon’s cultural import could, in fact, be its richest asset. While the imposing Murgatroyd and Ogden exterior is unchanged and pristine, the interior was twice gutted and reconfigured.

In 1981, the new co-ed Barbizon shrunk from 700 tiny rooms with shared baths to 306 smallish rooms with private baths. More drastic change came in 2006, when the building was carved into 70 high-end apartments, ranging from one-bedrooms priced at $1 million to a 5,300 square foot duplex penthouse for $17 million.

As for the original coffee shop and sprawling, high-ceilinged mezzanine, where women flipped through magazines, shared confidences and socialized with the men who managed to obtain a coveted visitor’s pass, little of the past is evident in the sparkling, sprawling digs of the Equinox Health Club, which currently occupies the space.

Backtrack to the three decades from the late ‘20s to the late ‘60s. For legions of young small-town women harboring Big City dreams, whether of a career or marriage or just a taste of Stock Club/mink stole sophistication, 140 East 63rd Street was the most glamorous address in town. Eileen Ford billeted her models here. Students of the prestigious Katherine Gibbs Secretarial School filled the 16th and 17th floors. And from 1939 to 1979, Mademoiselle magazine’s college-age guest editors resided for the month of June, including Sylvia Plath in 1953. Sizing up the place through the unsparing eyes of Esther Greenwood, her brainy but troubled 19-year-old narrator in The Bell Jar, Plath wrote:

“The hotel – the Amazon — was for women only, and they were mostly girls my age with

wealthy parents who wanted to be sure their daughters would be living where men couldn’t get at them and deceive them; and they were all going to posh secretarial schools like Katy Gibbs, where they had to wear hats and stockings and gloves to class.”

Indeed, the manager was said to collect the lost white gloves in a box and pass them around occasionally.

The Barbizon as Beacon-to-Young-Women didn’t just happen. In its heyday, the hotel marketed itself relentlessly through gossip column tidbits and fashion magazine advertisements inviting “ambitious, discriminating young women” to become “Barbizon girls.” “The Barbizon sold not a residence but rather an ideal: life as portrayed in the pages of Photoplay,” wrote Michael Callahan in Vanity Fair.

A writer for Time magazine claimed the building possessed “the greatest concentration of beauty east of Hollywood.” With actresses like Gene Tierney, Dorothy McGuire, Barbara Bel Geddes and Ali McGraw and Vogue cover girls like Gloria Barnes. Jean Patchett and Dolores Hawkins passing through, he may have had a point. Still, with 700 rooms to fill, not everyone was destined to be a star.

Nor was the hotel’s star destined to last. By the early 1970s the Barbizon’s fizzy magic had evaporated. Joan Faier, a lawyer and writer who was part of Mademoiselle’s 1974 crop of guest editors, recalls dimly lit hallways, heavy mahogany furniture and a gaping hole in the sky blue paint near the mezzanine’s elaborate crystal chandelier. Her room, a small cell painted Pepto-Bismol pink, had one window and an outmoded radio speaker on the wall that didn’t work.  An ancient bathroom was down the hall.

The Barbizon hauteur, however, remained intact. When Faier’s boyfriend perched on the arm of a lobby sofa after depositing her bags, he was swiftly reprimanded, she recalls.  “The woman at the front desk said, ‘Young man, until you learn to behave properly you shouldn’t come to a hotel like this.’”

I also stayed briefly at the Barbizon in the mid 1970s during a college internship at a magazine. The proud but past-its-prime hotel I encountered reminded me of Miss Havisham and seemed in sync with 1970s New York City, which was on the brink bankruptcy. About a third of the guests were older women I’d see in the elevators, the library or the TV room. Unlike Miss Luther, the gregarious drama coach in Stage Door, they rarely spoke to newcomers. “The old women who live here today are the young women who lived here 30 years ago and never left,” said an elevator operator whose job, among other things, was making sure men alighted only on the mezzanine or 18th floor lounge, never on the residential floors.

The co-ed Barbizon, where I spent a night in 1997, felt friendlier, yet never quite clicked as a

conventional hotel. I was pleased by the private bath, but the double bed ate up most of the room, rickety white shutters covered the window and an air conditioner yammered away all night. In 2002, the place was spiffed up and renamed the Melrose Hotel. Ian Schrager was rumored to be eyeing it for his boutique hotel empire.

Instead, the hotel closed and was reborn in 2006 as a condominium with luxurious Old World trappings like French doors, rosewood floors, marble bathrooms and deep crown moldings. Among those said to own a Barbizon pied a terre are British comic Ricky Gervais and French billionaire Francois Pinnault.

The original Barbizon, of course, lives on in the handful of women who never moved and now have the good fortune to occupy rent-stabilized apartments in one of the area’s most stylish condominiums.  I imagine they hope the Barbizon achieves landmark status. I do, too. The building was always good looking, but it would look even better sporting a plaque.

All You Need To Know About Tipping at NYC Hotels
Trilby: The Cooper Square Hotel Tries Out (Yet Another) New Resaurant
At Long Last — A New Look For The Marriott Marquis Lobby
High-Fiving The Plaza’s Peek-a-Boo Palm
Three NYC Hotel Designers Discuss Their (Gorgeous) Handiwork at the Museum of the City of New York
Where Would Will and Kate Go If They Were In Town? New York’s Hotels Battle It Out with Fancy Royal Wedding Breakfasts
9 replies