Last year the Grand Hyatt New York, in the throes of a massive renovation, strung holiday lights from the construction scaffolding. This year the scaffolding is history, and a towering Christmas tree constructed from glass balls brings on the cheer.

A $130 million renovation is worth cheering – in part because it’s finished (the work unfolded in phases over three years). But the changes are smart, embracing nearly every inch of this midtown behemoth. “We’ve modernized,” said Mark Pardue, general manager, at a party celebrating the new building.

What they really did was un-Trump the place. 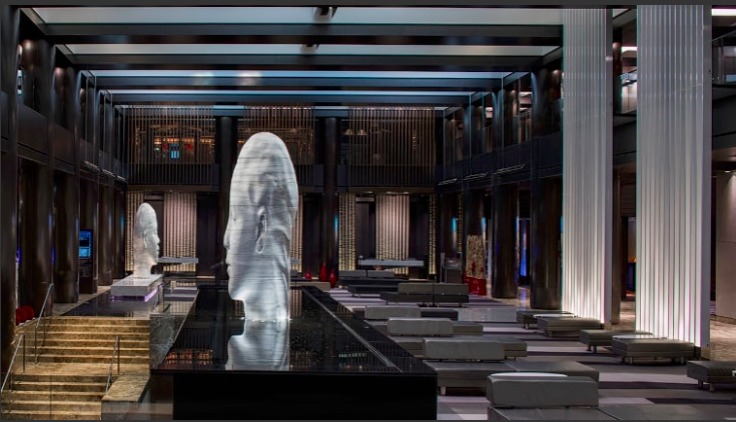 A partnership between Hyatt Hotels and Donald Trump, the Grand Hyatt opened with a splash in 1980. Named for the hotel’s proximity to Grand Central Station and its grand aspirations, the brash newcomer in a gleaming glass box – and the first link in the Grand Hyatt chain — went up on the site

formerly occupied by the Commodore, a classic 1918 train station hotel. As befit the flashiest hotel in the neighborhood, the cavernous lobby boasted acres of polished granite, a forest of bronzed metal columns and a fountain the size of an Olympic swimming pool. If Ivana Trump, ca 1980, was a hotel, she’d have looked like the Grand Hyatt.

Years passed, and the hotel aged as gracefully as power suits and shoulder pads. A modest redo in 2005 helped but clearly more work was needed. And now the transformation is complete. Did $130 million buy the Grand Hyatt a ticket to the 21st century? Here’s what we saw.

The Lobby What do you do with one of Manhattan’s biggest lobbies?

Celebrate its bigness. No effort has been made to cozy up this airline hanger of a space, and in a square-footage-starved city, its sheer size – nothing is crowded, nothing is camped — comes across as a luxury.

Dressed in shades of silver, slate, white and gray, the lobby is businesslike and sleek, like a gray flannel pin-stripe suit (the previous palette of yellows and golds called to mind a brassy blond).  From a perch in a leather swivel chair or on a leather bench the place looks like a 21st century boardroom or an airline member lounge, comfortable and efficient.

But look around and things get interesting. In front of the raised seating area stands a dramatically lighted black stone water wall with an enormous sculpted marble head perched on top. The work of the Spanish artist Jaume

Plensa, the head is eerily mysterious (and quietly gorgeous), a contemporary riff on an Easter Island sculpture or a Thai Buddha. Architect Carol Bentel remarked that the lobby was inspired by the Museum of Modern Art sculpture garden, and yes, we get it. Best detail: “screens” of white bars that wall off the elevators from the seating area.

Another massive head bookends the lobby near the check-in desks, slimmed down from one inquisition-style counter to a trio of sleek white marble tables with laptops. While the lobby was in transition, Market, the savvy grab-and-go food shop, and Grand Central, the hotel’s sleek restaurant, bar and serve-yourself wine bar looked like stylish orphans. They fit into their surroundings seamlessly at last.

A few hints of the old Grand Hyatt remain, from the original granite floor and walls in the foyer to the round metal columns, buffed to an elegant silvery black. Reality bites: the recession trimmed the renovation budget, preventing a grand-scale gutting. But far from detracting, these oldies offer a whiff of history and remind you the Grand Hyatt New York wasn’t born yesterday.

The Rooms They’ve slimmed down the room total from 1,311 to 1,306. That’s still a lot, but all boast new bathrooms, new furniture and a contemporary, mid-century mod-inflected look that for midtown Manhattan is amazingly serene. Rank-and-file rooms sport low built-in cabinets, a round table that doubles as a desk, a leather bench, gray, pin-stripe carpeting and a patterned mural behind that bed that gives off an urban vibe (hey, we’re in New York). Bathrooms are still small, but that’s how they built ‘em in 1980.

Top-of-the-line Premiere Suites are like a hotel within a hotel. The one we saw looked like a one-bedroom apartment with pale wood floors, white walls and open-plan everything. The bathroom doubled as a dressing room with ample closets, an enormous stall shower and a closeted toilet. We like the travel memorabilia displayed throughout the sitting area – an elaborate wall map where you can track your trips, a sculpture of an airplane atop a book. But we really like the desk hidden in a closet in the bedroom. Close the doors, and your work goes away. Sweet.

Grand Club  More hotel within a hotel. The Grand Club, available for a $100 a day surcharge or with Hyatt points, sprawls on the 16th floor, a vast

contemporary lounge with leather sofas, flatpanel TVs, the day’s newspapers and a pantry that serves up unlimited soft drinks, a continental breakfast, afternoon nibbles and evening desserts. Hints of nature — a wood sculpture that looks like stones, butterflies under glass — remind you New York isn’t all about concrete. The best part is reserved for good weather — an enormous terrace equipped with sofas and tables and a sweeping view of 42nd Street river to river.

Cheers! The Best Hotel Drinks of the 2010 Holiday Season
60’s Redux: Sipping Classic Mai Tai — with an Umbrella! — at the Pierre
“Mindfulness” — A New Exhibit Under Glass at the Roger Smith Hotel
Fifth Avenue Star Power: The Pierre and The Plaza Co-Star with Richard Gere in the New Thriller “Arbitrage”
A Big Win for Rory McIlroy, Jumeirah Hotels — and New York’s Essex House — at the 2011 US Open
Who Needs London? New York Hotels Where You Can Watch the Royal Wedding (With Breakfast)
4 replies

The Standard Gets Its Close-up In “Shame,” Michael Fassbender’s... Need a Last-Minute Holiday Gift? These NYC Hotel Shops Want to Help
Scroll to top