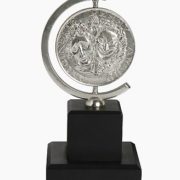 You didn’t have to watch the Tony Awards to know that Broadway is having a moment. But what you may not know is that some of the 2016 Tony’s biggest names boast ties to New York City hotels. Here’s where to find rooms by a Tony-award winning designer, a bar where we’ve spotted Tony winners after the show and more. 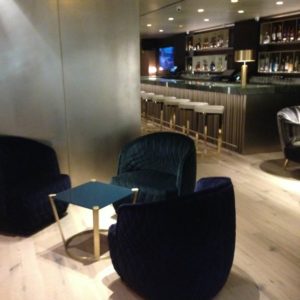 The Time bar and lounge.

Rockwell’s world Creator of eye-popping set designs for a slew of Broadway shows like Kinky Boots and On the Twentieth Century, architect and designer David Rockwell took home his first Tony for the multi-faceted jewel box parfumerie that backdrops She Loves Me. But with a cast and crew of 250, his Rockwell Group designs just about everything, including hotels. The New York Edition, Andaz Wall Street and Yotel are just a few. His latest, The Time Hotel, stands across the street from the Ambassador Theater, home to Chicago and ideal for a post-theater drink (just ask the cast). The glamorous night lounge is separated from the day lounge, aka lobby, by heavy pleated curtains that look noir and architectural at once and lace up handily, like a corset. 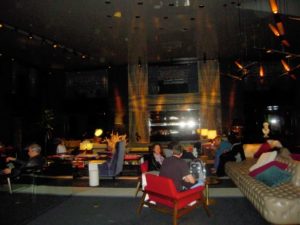 Hamilton! A go-to spot for Broadway enthusiasts, the Paramount is renowned for (often) agreeably priced rooms if space isn’t your priority and a big, buzzy lobby that benefited mightily from a 2013 renovation (we love the gas-jet fireplace that throws off good looks and heat). It’s easy to miss the clubby Paramount Bar & Grill adjoining the lobby. But on more than one occasion, we’ve spotted cast members from the sold-out show that harvested 11 Tony awards, seated at the bar and relaxing in the banquettes. We’ve even seen author/actor Lin-Manuel Miranda, who won Tonys for best score and best book and delivered the night’s best sonnet. And if cast appearances are not a sure thing, potent drinks are. 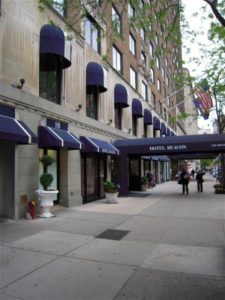 Home to the Beacon Bar.

By the Beacon The only way to gain entry to the historic Beacon Theater, where this year’s Tony awards unspooled, is to go to a show. And while you can catch acts like Bryan Ferry, Alice in Chains and Steely Dan on the Tony’s uptown stage, the theater is often dark. Having a drink at the bar at the Hotel Beacon is the next best thing. A few years back this dependable 1920s hotel, better known for big rooms with kitchenettes than style, spiffed itself up and transformed a large space off the lobby into Beacon Bar. With light nibbles and house cocktails boasting New York names, it’s a congenial spot. And it’s on Broadway, even if it’s 20 blocks above the Theater District.

The Time Hotel Gets A Chic New Look
Stayful, a Deal-Savvy Website for Bidding on Boutique Hotel Rooms, Checks In
The Paramount Tweaks its Signature Lobby — Again
Drinks in Champagne Saucers: The Paramount Hotel Gets a Chic New Bar
The Paramount Lobby Gets a New Look — Again
7 Hotels That Spin It For Bike Riders
4 replies

Why the Sheraton New York Times Square Came Up Big on New York Primary Nigh... Why the Waldorf Astoria is Closing for Renovations, and Why You Should Stop...
Scroll to top