As you may have noticed if you followed the coverage of last night’s New York Primary, Hillary Clinton and 1,500 of her closest friends and supporters were stomping at Sheraton New York Times Square for her victory soiree. 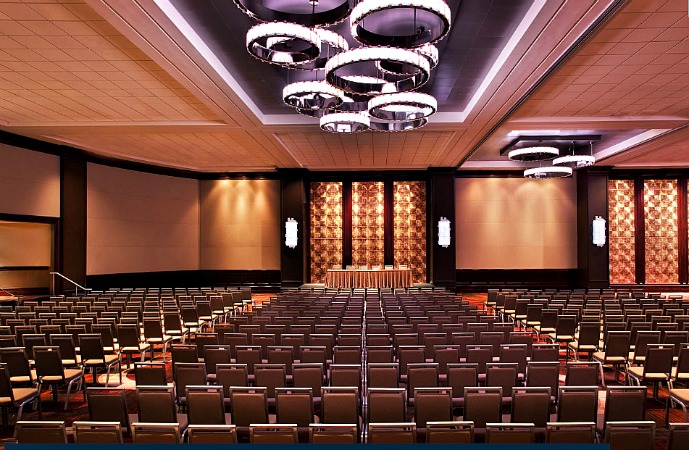 Clinton’s post-vote get together was precisely the type of event the Sheraton had in mind when the hotel sunk $180 million into renovating their massive ballroom in 2013. Among the upgrades big money and smart planning can buy are good looks (the room’s coppery backdrop is light, energetic and contemporary), green trappings (the chandeliers use LEDs to light up with whatever color the candidate wants) and high-tech everything.

Though the Waldorf-Astoria, New York Hilton, Lotte New York Palace and Grand Hyatt New York are among those blessed with spacious gathering rooms, the Clintons have used the Sheraton for Clinton Foundation conclaves over the years. And politicians have favored the Sheraton’s grand-scale digs for years, even when the backdrop was an intense Ralph Lauren blue.

But not Donald Trump. Though two New York hotels flaunt his name, he chose the reddish gold marbled lobby of Trump Tower for his verbal victory lap, perhaps because it matches his hair.

A Room Where You’ll See The Candidates On Election Night
Why Are So Many NYC Hotels Tweaking Their Names?
The Best of the New at NYC Hotels, 2012 Edition
Sheraton New York Times Square Scores A Big Win Hosting the 2022 New York Democratic Convention
Backdrops Count: The NYC Hotels Where Trump and Clinton Addressed the Faithful After Election 2016
An Old Hotel Gets A New Name: Meet the Sheraton New York Times Square Hotel
0 replies