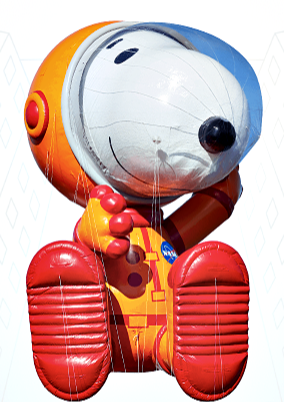 Or you can check into a hotel along the parade route and and tuck into a room service breakfast as the world’s largest parade passes by.

Nine hotels have the good fortune to stand along the parade route, which starts on West 77th Street and Central Park West, turns onto Central Park South and marches down Sixth Avenue to Herald Square. A tenth hotel is gifted with rooms overlooking West 81 St, one of the streets where the balloons are inflated the night before Thanksgiving.

Booking a parade-view room comes with a unique set of rules. Don’t even think about reserving online. As Jonathan Stas, marketing manager at the New York Hilton Midtown explains, “We want to talk with all prospective guests so we can provide the best room for their needs.” Parade-view rooms are pricey (the cheapest start at around $500). Most hotels require a three-night minimum at Thanksgiving. And just because a hotel faces Sixth Avenue doesn’t mean Little Cloud or Goku will be visible from every window. Another holiday quirk: since the parade is meant to be seen from the street, rooms on lower levels are most desirable.

November is an excellent time to book a room — for next year. Most hotels take names of interested guests year round and finalize reservations in the summer when prices are firmed up.

That said, parade rooms are still available. Here’s where to stay if you want to be where the parade passes by — rain or shine.

Trump International New York Hotel & Tower This luxury tower is the first hotel the parade passes as it wends its way to Macy’s. Rooms facing Central Park West offer spectacular views provided you’re on a low floor. Those booking a room without a view can gain access to the private viewing area in front of the hotel. The hotel also offers a Thanksgiving package that includes breakfast in your room and tickets to Wolman Rink in Central Park. One Central Park West at 60th Street, 212 299-1000

JW Marriott Essex House This stylish Art Deco hotel is twice blessed when it comes to the parade. Not only do rooms gaze down upon the big event as it marches along Central Park South, the hotel’s South Park restaurant offers views from the ground floor. Guests with view-less rooms can reserve a view in the restaurant. The parade-room package includes tickets to Wolman Rink and a visit to the room by the hotel photographer. 160 Central Park South between Sixth and Seventh avenues; 212 247-0300

1 Hotel Central Park  One of New York’s greenest hotels — and we’re not just talking about the ivy that envelops the brick exterior — 1 Hotel Central Park opened in 2015, a feast of reclaimed wood, energy efficiency and local sourcing. The hotel also has the good luck to stand directly above the parade route and boasts rooms with excellent views, many outfitted with the ultimate parade-watching accoutrement — window seats. Guests without parade-view rooms can partake of the buffer breakfast in Jams, the otel restaurant overlooking the parade. 1414 Avenue of the Americas, 212 703-2001

The Quin  This small luxury hotel opened in 2013 just in time for Thanksgiving and has offered parade packages ever since. And small wonder: the hotel’s east-facing rooms look directly at the parade. The Macy’s Thanksgiving Day Parade Experience includes a room or suite with a view and a continental breakfast of fresh fruit and pastries, coffee and teas on Thanksgiving morning. Non-package rooms are also available. 101 West 57th Street at Avenue of the A1mericas; 212 245-7846

Warwick New York  Views of the Macy’s Thanksgiving Day Parade were probably the last thing William Randolph Hearst thought about in 1926 when he commissioned this 36-story brick tower as an apartment hotel for his Hollywood honey, the starlet Marion Davies. But the fully renovated hotel is well stocked with rooms in pale, soothing hues that look directly upon the parade. Guests who don’t score a parade-view room can avail themselves of a spot in front of the hotel..  65 54th Street at Avenue of the Americas; 212 247-2700.

New York Hilton Midtown  As befits the largest hotel on the parade route, the New York Hilton Midtown offers a staggering array of parade watching options — nine in all, from premium corner rooms on low floors so you can see the parade arrive and meander along Sixth Avenue to less pricey partial views on higher floors as the parade journeys south to Radio City Music Hall. Hilton rooms are spacious by Manhattan standards, and the renovated executive floor rooms and suites are gorgeous, cool, blue and sleek, if mid-century mod is to your liking (unfortunately, they’re situated on high floors). Sidewalk watching is restricted to hotel guests, so you might still score a good look if you choose a non-view room. 1335 Avenue of the Americas between 53rd and 54th streets; 212 586-7000.

Courtyard Marriott New York Manhattan/Herald Square Billeted in a former bank, this newish hotel, opened in 2013 by Major Michel Bloomberg, stands directly across the street from Macy’s. For those who miss out on — or don’t want to pay for — a room with a parade view, guests can book a spot at the viewing party in the hotel’s glassed-in patio facing the parade’s big finale at Herald Square. The not insubstantial cost of your party ticket includes a buffet breakfast of scrambled eggs, sausage, bagels, muffins and hot chocolate. 71 West 35th Street at Avenue of the Americas; 800 228-9290

The Night Before Thanksgiving

Excelsior The official Inflating of the Balloons, a dizzying, eye-popping undertaking that unfolds on the streets bracketing the American Museum of Natural History the night before the big event, is a great way to see Pikachu, Sponge Bob and the Grinch up close, even if they’re flat on their backs and not quite full. The Excelsior, a moderately priced 1920s hotel, offers terrific views of the proceedings and entry to the street (since 9/11 access to balloon-inflation streets has been restricted). With its location a short walk from the parade’s start, you can probably score a good perch on the street the following day, provided you wake up early. 45 West 81st Street between Central Park West and Columbus Avenue; 212 362-9200