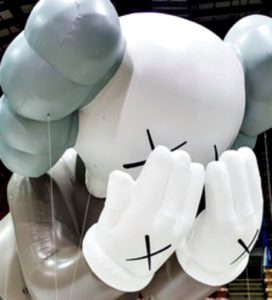 The last time we saw Companion, artist KAWS’s iconic cartoon character with big curly ears, Disney hands and a pair of Xs for eyes, he was a sculpture – a really big one. During the summer of 2011 his seated form, rendered in gray and white in steel, loomed 16-feet tall in front of The Standard hotel, hands over his eyes, the shyest character in town.

A year and change later he’s back in New York. This time he’s even bigger (and weighs a lot less). Look for him up in the air, hands covering eyes, at the 86th annual Macy’s Thanksgiving Day Parade.

As far as we know, Companion is the first hotel sculpture (temporary or permanent) to morph into a Thanksgiving Day parade balloon.

A bashful balloon is also a first for the parade, Macy’s lead designer, John Piper, told The Wall Street Journal. “It’s the first time we’ve had a character that shy,” he said. Good point. No one would call Kung-Fu Panda (or Buzz Lightyear) demure.

whose street art tag is KAWS, a moniker he chose because he liked the way the letters looked together.

The appeal for Macy’s, according to the Journal, is KAWS’s double pedigree as an acclaimed artist who happens to be a successful toymaker – a street art Santa, if you will. KAWS’s limited edition 8-inch renderings of Companion in various guises sell out almost instantly.  Besides toys and fine art, his fat portfolio includes product collaborations with fashion company Comme des Garcons and Mexican beer maker Dos Equis (he designed a limited edition bottle).

And now a balloon. According to the Journal, only four other artists – Tim Burton, Jeff Koons, Takashi Murakami and Tom Otterness – have created inflatables for Macy’s in the past. The big question for hotel buffs is will Big Kastermann by Austrian surrealist artist Erwin Wurm be next? Wurm’s Big Box Man stood on the plaza in front of The Standard this past summer. And being headless, it looked pretty shy, too.

Preview of Coming Attractions — 5 Cool Hotel Gadgets Ready For Their ... Hello, Gorgeous — The Waldorf-Astoria’s Park Avenue Lobby Gets An...
Scroll to top