For 364 days of the year the most desirable rooms at the new Courtyard Marriott Manhattan/Herald Square are those with views of the Empire State Building. But that changes on Thanksgiving Day.

The new 167-room hotel has the good fortune to sit on the corner of Sixth Avenue and West 35th Street, a block away from Macy’s Department Store and directly above the street where Snoopy, Hello Kitty and all the other balloons, floats and bands pass by in the annual Macy’s Thanksgiving Day Parade. 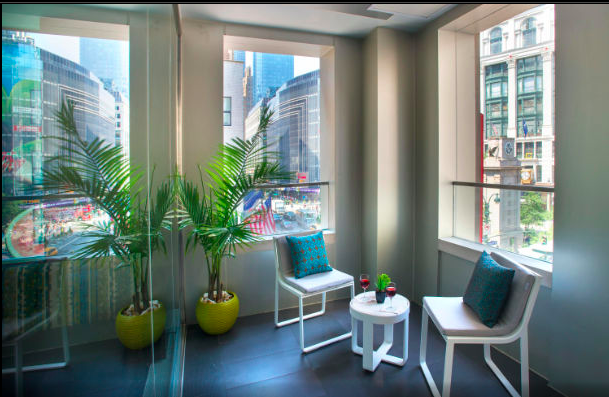 Whether New York needs another hotel in Herald Square – this is the third to open this year – is anyone’s guess. But no one disputes the need for more hotels with windows looking onto the parade.

When the route downtown was changed from Seventh Avenue to Sixth Avenue in 2012 – the switch was attributed to work on the Times Square pedestrian mall but was long thought to be in response to Macy’s request for a more direct parade route – the number of hotel rooms overlooking the parade shrunk. Eight properties on Seventh Avenue and in Times Square lost their highly desirable – and highly lucrative — parade views. They were replaced by three on Sixth Avenue.

The current line-up includes the Trump International Hotel and Tower, Mandarin Oriental New York, JW Marriott Essex House, Ritz Carlton New York Central Park, the Warwick, the New York Hilton Midtown, the Residence Inn New York/Manhattan Times Square and the new Courtyard Marriott. Farther uptown, The Excelsior, perched across the street from the American Museum of Natural History, gets an honorable mention: it overlooks the street where the balloons are inflated the night before the parade.

It’s hard to imagine a hotel better situated for parade watching than the new Marriott.

Windows in the handsome redesigned 1928 building – originally home to the Atlantic Bank of New York – are big and clean. Better yet, the second floor lobby sports an open-air terrace set above Sixth Avenue, affording outdoor viewing above street level.

And since Macy’s is steps away from the hotel, guests can witness the parade’s grand finale, as Santa & Co. arrive at the elaborately decorated department store at end of their long march. For parade enthusiasts who double as Black Friday door-buster aficionados, being steps away from Macy’s could be heavenly (or costly).

It’s doubtful that this was a deciding factor in the design of the hotel and its business-cheerful multi-purpose lobby. (The space features  booths and dining tables, a grab-and-go and coffee bar dispensing Starbucks, a work area outfitted with computers, printers and a small library, and a generous seating area with big sofas.)

Still, at the ribbon-cutting ceremony in July, Jack Hidary, CEO of Hidrock Group, the developers of the hotel, said his organization had looked into other uses for the property when they purchased it four years ago. “We were surprised to discover a hotel was the most efficient use of the space,” he said.

New York’s booming tourist industry – currently the city’s fifth largest business sector – was an obvious factor in the decision to build a hotel. The city is on target to greet more than 53 million visitors this year, topping last year’s record-breaking 52 million, according to NYC & Company, the city’s marketing and tourist organization. The leisure and hospitality industry accounts for 365,000 jobs, 4,600 of those at Marriott properties (the new hotel employs 60 people).

Those numbers were apparently enough to lure Mayor Michael Bloomberg to the Courtyard for the ribbon-cutting. Flanked by David Marriott, COO of Marriott International, George Fertitta, CEO of NYC & Company, and Hidary, the mayor, in one of the final ribbon-cuttings of his reign, picked up his scissors and declared, “We’re going to do this only once.” On the count of three, the ribbon was snipped.

Was that the Tribeca Grand On View for a Blink in “Blue Jasmine?” Pass the Popcorn: What Movies Were Watched the Most in Hotel Rooms During J...
Scroll to top