As Alfred Hitchcock knew, a movie cameo can make a big impression, even if it’s over in a blink. Consider the brief appearance of the Berlin Hilton in Bridge of Spies, Steven Spielberg’s clear-eyed dramatization of a Cold War spy exchange that’s nominated for six Academy Awards, including Best Picture and Best Production Design. 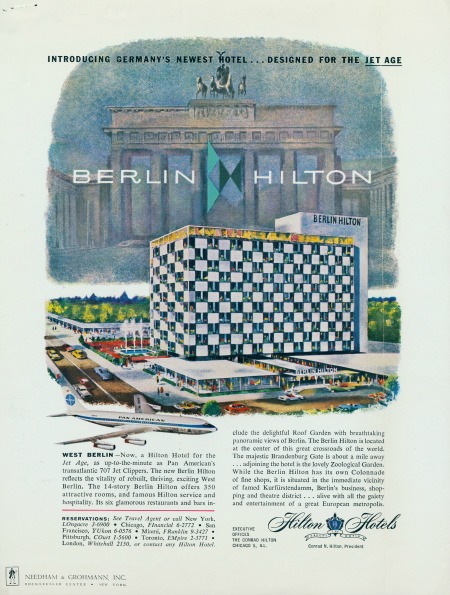 Designed for the Jet Age: a magazine ad for the Berlin Hilton, ca. 1958.

The scene unfurls in the hotel dining room where Tom Hanks as James Donovan, Brooklyn insurance lawyer turned master negotiator, briefly sits down to an American breakfast before being spirited away to a clandestine meeting. The hotel looks stylish and energetic, a symbol of West Berlin’s burgeoning recovery and a dramatic contrast to the war-torn appearance of East Berlin.

And that’s how the hotel really looked, says Mark Young, Director of Hotel Industry Archives at the University of Houston’s Conrad N. Hilton College of Restaurant Management. “The Berlin Hilton scene is short but convincing.”

That it’s convincing is no surprise. Prior to filming, the production team headed by Oscar-winning production designer Adam Stockhausen contacted Young for information and images of the hotel exterior, lobby and dining room. “We have a scrapbook of Conrad’s with pictures of taken of the lobby and dining room before the first guests ever walked in,” he says.

For all its mid-century pizzaz, the Berlin Hilton, opened in 1958, had just 100 rooms and was smaller and less sumptuous than its Hilton contemporaries. “The Berlin Hilton was built at a time when Hilton was purposely downplaying the image of wow,” Young says. “There was still rubble all around in West Berlin, and Conrad thought if they were to build the equivalent of an Istanbul Hilton or Beverly Hills Hilton at that time it would be a slap in the face of the citizens who were still living in poverty.” 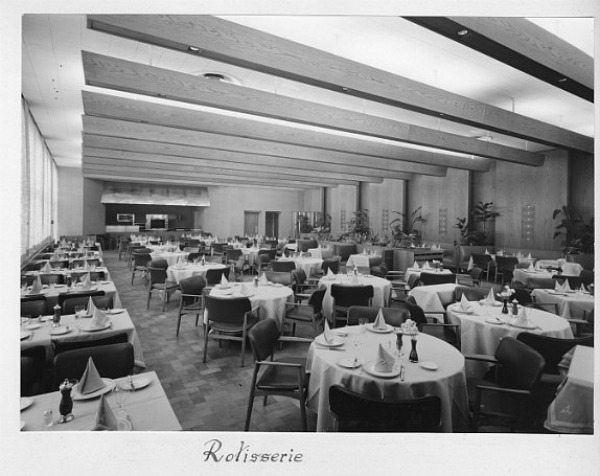 The Berlin Hilton Dining Room before the guests arrived.

As an authority on Hilton history, Young was impressed by the movie’s attention to minute details. “Each hotel had a unique logo. The Berlin Hilton had this kind of diamond pattern with an H, and it’s on the dining room walls in the movie.”

The production team also got breakfast right. “What was on the plate was your basic American Breakfast for the time period, which they served at all the Hilton hotels. I’m sure someone in Berlin at the time would have thought that was an extraordinary amount of food.”

One tiny quibble: Young reports that near the end of the scene the camera pans through the dining room and a luggage cart is visible in the lobby. “It’s one of those gold-ish things with a little crown on top. Only a geek like me would see this, but they didn’t have those back then,” he says.

Stockhausen, of course, is an expert at recreating hotels for movies. He won his Oscar for Best Production Design for The Grand Budapest Hotel, albeit a long leap from the realpolitik Berlin Hilton. And he’s known as a stickler for authenticity.

Helping out production designers is nothing new for Young. He’s dispatched images and data from vintage Hilton properties to shows like Mad Men and the short-lived TV series Pan Am as well as to documentary film makers around the world. Audiences today expect authenticity, he says. “If an image is out there, people noodling around the internet can find it. They know what things looked like in the past. If you’re doing a movie like this, you better get it right.”

Meet Courtyard Marriott Chelsea — How Select Service Hotel Brands Won Over Manhattan
The New York Hilton Hits 50, And a Hotel Historian Time Travels Back to Its Early Days
Teapots from The Plaza, Teaspoons from the Waldorf: Why Collectors Love Hotel Silver
13 replies