Earlier this year we reported on Camp Rockaway, a germ of an idea for a laid-back, low-cost campgrounds with creature comforts like beds instead of sleeping bags and tents on wood platforms, complete with decks and adjoining pup tents for kids.

In June the project, planned for a site near newly hip Rockaway Beach in Queens, reached its Kickstarter goal, raising more than $50,000 to finance the necessary design and construction plans to move the endeavor forward. Late this summer a sample tent went up on an empty lot ringed by houses steps away from the beach. 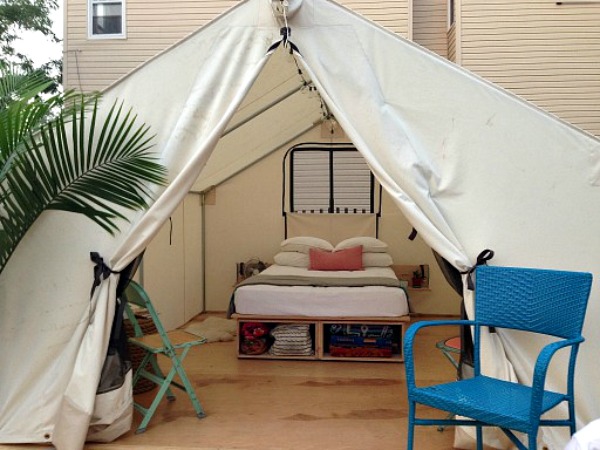 A low-key party offered a literal taste of what Camp Rockaway might look and feel like if things go as Kent Johnson, the man with the plan, hopes. A rainy mist didn’t dampen the mood as a small gathering, mostly from the immediate neighborhood and Brooklyn, sipped beer and toasted marshmallows for s’mores over a roaring campfire.

As kids scampered past tiki torches and scoped out the chicken coop at one end of the grounds, adults relaxed in lawn chairs under a large tree, bounced on the tent’s neatly made bed and clustered around a picnic table where you could tie-dye T-shirts. 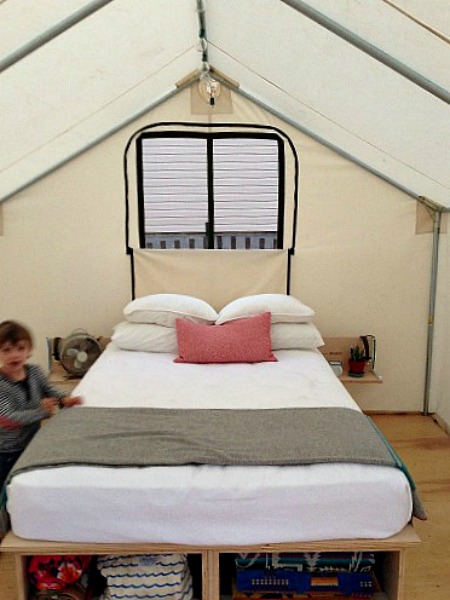 Checking out the bed

Inspiration for Camp Rockaway were Rockaway Beach’s early 20th-century tent communities, a fixture during its heyday as a resort for heat-weary New Yorkers who couldn’t afford to stay at beach-side hotels. The efficient 21st-century incarnation pitched on the lot looked inviting. A flap on the peaked roof lifts to accommodate the chimney of a wood-burning stove. Storage cubbies nestle under the queen-size bed. And simple side chairs give the tent a residential feel. 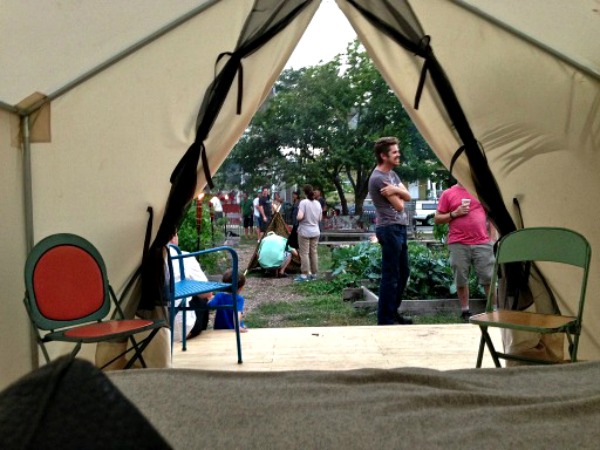 The view from inside the tent

A project backer has been camping out in the tent this fall, road-testing the amenities, the glamping equivalent of a soft opening at a hotel.

Will Camp Rockaway be ready to roll come spring? Johnson isn’t sure. There’s still lots to do, from securing a site to obtaining permits. But the party, which gained torque as strings of white lights blinked on at dusk, offered a preview of what he hopes will unfold. “It’s the feeling we want,” he said.

What’s It Like To Work at a Hotel During a Hurricane?
Scary Sandy, the Hurricane Horror, Checks In and NYC Hotels Hunker Down
How Have NYC Hotels Weathered the Horrors of Hurricane Sandy?
Why Do the Construction Gods Seem to Hate Le Parker Meridien?
Camping in New York City? An Entrepreneur Discusses His Plan for Camp Rockaway
Where The Dogs Are: Three NYC Hotels Where You Can See Top Dogs From The 2016 Westminster Kennel Club Dog Show
9 replies

Is Jean-Geoges at Trump International Hotel & Tower the Best Hotel Restaurant... Bad News for The Broadway: Another Hotel Gets Zapped for Fining Guests Who Write...
Scroll to top