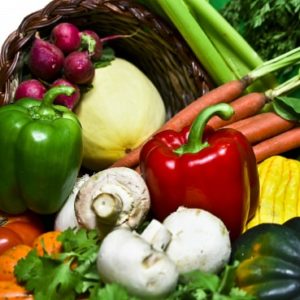 Hard as it may be to picture – especially if you’re gazing at the Empire State Building – Manhattan was once blanketed by farmland. John Rowland, the 19th-century surveyor who mapped Manhattan’s street grid, knew all about it. In his spare time he fashioned nearly 100 maps of the island’s farms.

But enough history. Manhattan farming is back, albeit on a very small scale (think planter boxes). Still, finding a Manhattan hotel that grows its own food – or at least some of it – is a lot easier than it was as recently as a year or two ago.

You won’t see a scarecrow in the lobby, though you may see a coveted LEED certificate; green cred and roof gardens go hand in hand. Roof gardens outfit once-barren blacktops with roots and leafy greens that absorb airborne pollutants, deflect solar radiation and reduce the thermal load.

The plantings taste pretty good, too.

Here are five hotels where the mint in your mojito was probably grown on the roof.

Skyscrapers loom in the background. But as befits an English-owned hotel, the thicket of lush plantings at the Crosby Street Hotel calls to mind an English kitchen garden. “It has a nice feeling of willy-nillyness,” says executive chef Anthony Paris. “We grow a bunch of stuff and write menus around whatever comes up,” he says. Heavy rains curtailed the Crosby tomatoes this summer, but blueberries and strawberries flourished as did herbs like lavender, basil, verbena, mint and pineapple mint, a yellow-green bloom with a hint of Hawaii.

A big hit at the Crosby Bar and Terrace was the Blueberry Pie Sundae topped with honey lavender ice cream, all made in the hotel kitchen. “We basically had to handcuff people to keep them away from that,” Paris says. Fall means hotel-grown pumpkins, gourds and the annual chopped mincemeat competition, where contestants try to stuff the most mincemeat into a gourd. “We’re going for that, so we’re rooting for a really big gourd from the garden,” says Paris.
Crosby Street Hotel, 79 Crosby Street between Prince and Spring streets; 212 226-6400.

It’s hard to pass up the bountiful crops of fruit, vegetables, herbs and honey raised on the Waldorf-Astoria’s  20th-floor roof overlooking the Chrysler Building. Not that you’d want to. Rooftop chives and basil brighten the light Green Goddess dressing on the popular Peacock Alley Salad, fashioned with rooftop kale, swiss chard and lettuces when in season. The Rooftop Ramble gin-based cocktail is energized with rooftop basil. And honey made by hard-working Waldorf bees sweetens the fried chicken at the Bull & Bear Steakhouse as well as treatments at the hotel’s Guerlain spa.

First planted in 2012, the Waldorf garden is thriving. “We had so much basil this summer we let a lot of it flower in August, and our bees devoured the nectar in the blossoms,” says executive chef David Garcelon. “Some days you could see 100 bees at a time in the basil bed.” With luck, Garcelon hopes to harvest the last of the sage for stuffing for Peacock Alley’s Thanksgiving Brunch. As for the rooftop honey, “we carefully guard it so we will have it available until the next harvest, likely in July of next year,” he says.
Waldorf-Astoria, 301 Park Avenue at 50th Street; 212 355-3000.

Lest there be any doubt about sourcing, consider the name of the popular summer specialty at the Conrad New York‘s Atrio Restaurant and Loopy Doopy Bar — Watermelon and Rooftop Mint Salad. Sometimes the watermelon hails from the roof garden, too. “I picked two watermelons yesterday,” says executive chef Antonio Cardoso. “I picked them a little bit early, but they were very sweet, and we used them for that salad.”

First planted in 2012, the Conrad’s roof garden – a zen-like line up of irrigated planter boxes and fields of light-reflecting rocks that help cool the roof — is largely herbs, including thyme, sage, rosemary and mint. But this summer produced a bumper crop of heirloom tomatoes that crowned a scrambled egg bruschetta, a top seller at breakfast. “We don’t use pesticides, so I can pretty much pick a tomato from the roof and eat it right there,” Cardoso says. And he has high hopes for his autumn squash and eggplants, which are destined for the fall menu and specials.

Locally sourced food was a given back in 1926 when the Barclay was built. Still, it didn’t come from the hotel roof like the herbs used in the vinaigrette on the Barclay Bar & Grill Salad or the honey served at the hotel’s Natural Power Breakfast buffet. In 2011 the hotel’s 18-story high roof was transformed into an all-purpose garden. A small army of planter boxes bearing a cornucopia of fruits, vegetables, herbs and flowers blanket the southern end – the side with views of the Chrysler Building. Beehives are planted on the opposite side, up north. “We want the bees to work to get to the plants,” says executive chef Serge Devesa.

Besides providing the flavor and freshness guaranteed by a rooftop crop – “When I want basil I come up here and cut it,” says Devesa – the garden is a key component in the Barclay’s sustainability program. In addition to running on wind power the hotel boasts a state-of-the-art composting machine that transforms food waste into top soil and dry fertilizer, much of it destined for — where else? — the roof.
InterContinental New York Barclay, 111 East 48th Street at Lexington Avenue; 212 755-5900.

Like most working hotel gardens, the Westin Grand New York Central’s Eden-in-the air is off-limits to guests. But you can see its progress daily – and nightly – on the rooftop webcam, which beams onto fruits, vegetables and herbs as they bloom on the hotel’s 41st floor, eye level with the Chrysler Building.

After a modest effort in 2012, the garden blossomed into 11 planter boxes and four big barrels in 2013, yielding eye-catching crops of arugula, mesclun lettuce, heirloom tomatoes, yellow squash, zucchini and peppers as well as herbs like basil, thyme, oregano, cilantro and mint. Good news, in other words, for lovacores ordering from The LCL: Bar & Kitchen and room service. “You can really taste the difference between tomatoes grown in a greenhouse and tomatoes grown up here,” says executive chef Brian Wieler, who has fingers crossed for his fall pumpkins. “You can’t get more local than this.”
Westin New York Grand Central, 212 East 42nd Street near Third Avenue; 212 490-8900.

Checking Out the Crosby Street Hotel — And Its Grand Slam Cocktail
The InterContinental New York Barclay Closes for Renovations
Cool Stuff From Nine Clever Artisans at the Architectural Digest Home Design Show
How The New York Hilton Is Cultivating a Green Roof in the Middle of Midtown Manhattan
Four Hotels Where You Can View the Statue of Liberty Without Taking a Boat
Sidecars, Cosmos and Harvey Wallbangers: Drinking Up Eight Decades of Cocktails at The Barclay
16 replies

Stumptown or Starbucks? No Problem – They’re Next Door at the Park Central... You Like Embassy Suites – And Your Favorite New TV Show is . . . “Sleepy...
Scroll to top