Renovations of public areas are as awkward for hotels as their guests. The noise. The inconvenience. The mess.

So rock on Yotel Times Square for hiding the construction of its new lounge with a crowd-sourced Lego Wall stretching across the fourth floor as you exit the elevators.

The DIY wailing wall lets visitors get clever with Legos, building whatever images they want, the ultimate in house-condoned graffiti. 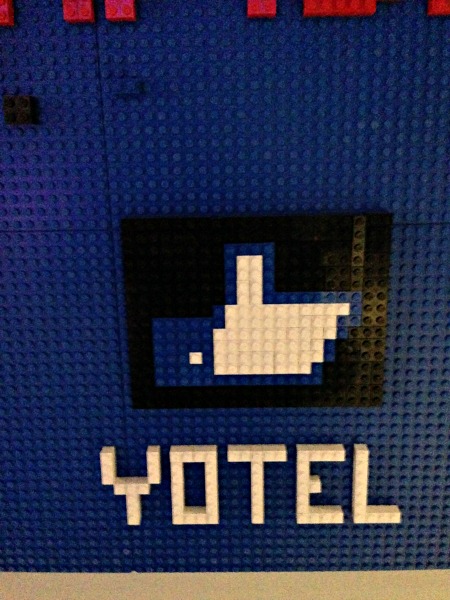 Made from Legos bu guests

In less a month, the wall has become a primary-colored patchwork punctuated by instantly recognizable renderings of Pikachu, the Union Jack, the flag of Ireland and a fat Big Apple.

Loose Legos lurk throughout the blue plastic backdrop, ready to be pieced into I’ll Be Back, the Olympic rings, whatever you desire. Spares are available in a box behind the concierge’s desk a few steps away.

A small crowd hovered when I visited, though they were observers, not creators.

“Great idea,” said a guy in a parka standing in front of a Legoed Homer Simpson.

Anyone can doodle with Legos, not just guests, and there’s a perk: the best creations win a free stay at Yotel. Just build, take a photo, post on Twitter or Facebook at YotelHQ and tag it: #MyLegoMasterpiece.

The wall is supposed to come down – and the new lounge open – in mid March, a concierge said. In the meantime, my money’s on Like Yotel. But from the look of things, the Lego Wall is just getting started.

An Old Hotel Gets A New Name: Meet the Sheraton New York Times Square Hotel
All You Need To Know About Tipping at NYC Hotels
Three NYC Hotel Rooftops Where You Can Catch a Movie and Feel the Breeze
0 replies

Who’s Afraid of the Dark? Not These Chic New York Hotel Hallways Up in the Air: Having a Drink at the Tallest Hotel Bar in New York
Scroll to top