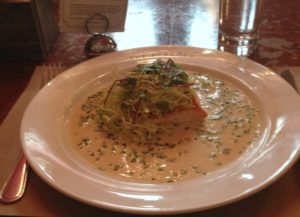 What do you need to pull yourself through a bleak, frigid, snow-soaked winter that seems endless, no matter what a certain genetically clairvoyant Staten Island rodent predicted earlier this week? Comfort food. And to guarantee it at an agreeable price NYC Restaurant Week Winter 2015 rolls into town February 16 through March 6 with 340 participants, more than ever before.

For 23 years Restaurant Week has drummed up business during the city’s slowest seasons (think extreme chill and heat when you might be tempted to give up an embarrassment of haute veggies and organic pancakes to be anywhere else). Three-course lunches for $25 and dinners for $38, often at super-desirable destinations, add up to one good reason to stick around town or venture in from a nearby suburb or someplace even snowier, like Minneapolis or Rapid City.

If you crave the ambient aura of travel that’s built into the DNA of the best hotel restaurants you’re in luck. Their ranks leapt from 35 to 41 this time, despite losing six previous participants including blue ribbon perennials like Cafe Boulud at the Surrey and Maialino at the Gramercy.

Never mind. Among the newcomers is hot ticket Narcissa at the Standard East, stylish Asellina at the Gansevoort Park Avenue, the new Park Hyatt’s glamorous Back Room at One57, East and West, Yotel’s fresh fusion offering, the Morgan Dining Room, which replaced long-shuttered Asia de Cuba at Morgan and JW Marriott’s glittery Southgate Bar and Restaurant.

Reservations are officially up for grabs, so click on, and prepare to lift your fork.

The Back Room at One57 at the Park Hyatt — Midtown

East and West at the Yotel — Times Square

Paramount Bar and Grill at the Paramount — Times Square

The Wayfarer at the Quin — Midtown

Super-duper — Three Hotels Where You Can Catch Super Bowl XLIX in New... What Does The World’s First Hotel Designed By Facebook Look Like?
Scroll to top