The Gansevoort Meatpacking District hotel made good use of its time during Covid and will reopen with a fully renovated property on October 1. We look forward to seeing the refurbished hotel as soon as possible and will report back with a new review. In the meantime, here is our previous review. The basic information about location, room size and history still hold.

At a glance: This is as close as you can get to South Beach without leaving town.

We’re not talking weather, but with its heated rooftop pool boasting a parade of chaises and easy access to the pricey bar, and a crowd that mixes the young/hip with those who think they are (or wish they were), this silvery 14-story tower, built in 2004, flaunts a palpable SB vibe, a mix of partying and preening by night, families by day.

Don’t expect to dive — the pool is only four feet deep. And though the hotel has high-tech conference rooms – and free WiFi – the tone is set by its sybaritic resort amenities, like lively bars and a spa, and its marquee status as a pioneering hotel in the trend-centric Meatpacking District.

For a hip hotel, seven years borders on geriatric, especially when newer, buzzier outposts, like the Standard, encroach on your turf. The aging Gansevoort needed some new tricks up its fraying sleeve, and change arrived in June 2010, with a new lobby and an indoor/outdoor cafe. Rooms updates followed in 2012. And the hotel continues to tweak its look.

The lobby is a big, clubby, good-looking playroom, with a pool table, Barcelona chairs and an enormous bar (more pricey Meatpacking District drinks). As a proponent of big, democratic hotel lobbies, I’m disappointed that the lounge is velvet-roped off, with freebie seating constricted to small clusters of leather club chairs atop cowhide rugs.

Staying afloat in this cut-throat, style-obsessed ‘hood isn’t easy, but the Gansevoort knows the ropes. It’s still popular and still a looker. (A newer uptown branch Gansevoort Park Avenue, famed for putting up the Kardashians, offers more of the same on the outskirts of midtown.)

Cool detail: A cobblestone sidewalk hugs the hotel, a wink at the original cobbled street in front, more than a century and a half old.

Rooms: Reminiscent of Sex and the City, they’re contemporary, stylish and sexy-sleek, though not as spacious as I’d like for a luxe hotel built from the ground up (most have queen-size beds instead of kings). But outfitted with pops of color, rooms look good.

My favorite features a bay window outfitted with a handsome window seat, so you can sit, room service coffee or champagne in hand, and gaze out onto the Hudson – or the construction site across the street that was once the beloved bistro Pastis. (The glassed-in balconies, available in larger rooms, are agreeable, too).

Food and drink: The Chester, the latest in the hotel’s long parade of restaurants, serves classic 21st-century comfort food and is a big switch from its predecessors, which all served Asian cuisine. The restaurant is an airy mix of decorating metaphors with white subway-tiled walls, imposing tufted leather banquettes and checkerboard marble floors, all lighted by crystal chandeliers. There’s also plentiful outdoor dining including a Biergarten with bratwurst, great for Meatpacking District people watching.

Plunge, the alfresco roof bar featuring Hudson views, pricey drinks and a stylish indoor lounge, can be lovely on a summer night — and gets wilder as the night wears on.

Amenities: Rooftop pool, available year-round to guests only. Well-equipped fitness center in the basement. Exhale, a stylish full-service spa, is also in the basement. In addition to reduced fees for treatments, guests can use the steam room free of charge. Free WiFi. Guests can use Puma bikes (available with helmets) free of charge (a bike is an easy way to get around Downtown, and nearby Hudson River Park is ideal for a ride). IPod docking stations. A variety of kid services, including Wii games and a treat box at check in. Pets allowed ($100 per stay).

Surroundings: The Gansevoort is in the heart of the Meatpacking District, a small, out-of-the-way expanse near the Hudson River that lived up to its name a century ago with 250 slaughterhouses. These days its notoriety hovers around a hip line-up of restaurants, nightclubs, shops and hotels. This is a superb locale if you plan to spend time in Downtown Manhattan, long to wrap yourself in designer clothes and want to drink in the party vibe — literally (lots of bars, lots of late hours).

Crave sports? Chelsea Piers, the uber-athletics center with bowling, golf, ice-skating and a gym, is nearby, and Hudson River Park boasts ideal running and biking trails. Love contemporary art? Chelsea’s galleries are a short walk away as is Greenwich Village. SoHo, Nolita, Tribeca and what remains of the Financial District are also an easy reach. The subway is a trek, but buses, including the Crosstown 14 that delivers you to the subway, are steps from the hotel. Taxis are everywhere, especially late at night, but this is also Uber territory.

Back story: The Gansevoort’s immediate predecessor was a parking lot. That didn’t stop a hue and cry from preservationists when ground broke in 2003 for this ultra-modern glass-and-metal pile, built by WSA Management and designed by architect Stephen Jacob with interiors by Andi Popper.

At 13 stories, including a rooftop pool, it towers over its low-slung neighbors in this historic district (the cobblestone streets are the real deal). And with its hip vibe and pulsating nightlife, it embodies the latest incarnation of Meatpacking District.

The fuss eventually calmed down. The nearby Standard Hotel is even taller, and with its notorious floor-to-ceiling windows, more infamous. We wouldn’t call the Gansevoort sedate, but it looks utterly at home.

Keep in mind: The flatpanel TVs in the rooms I saw were very small. 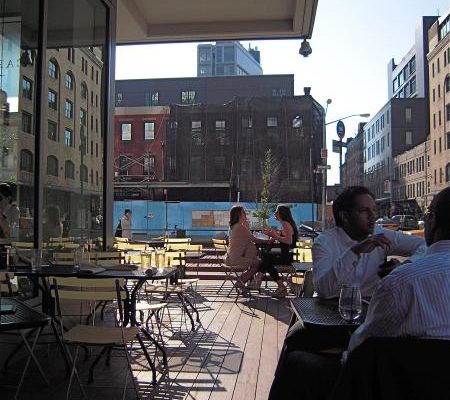 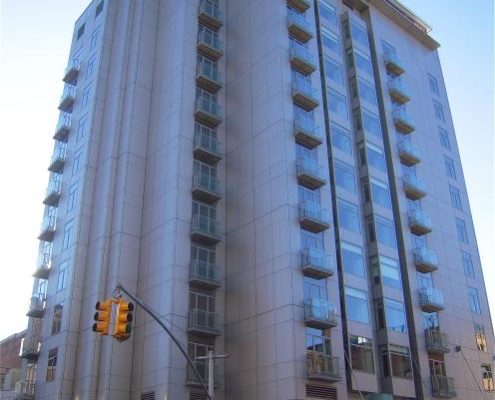 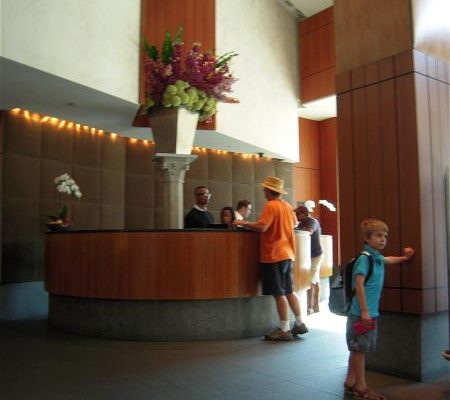 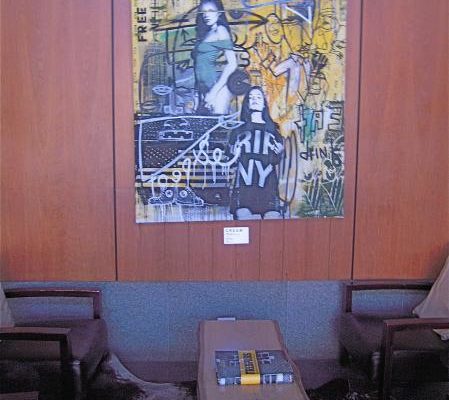 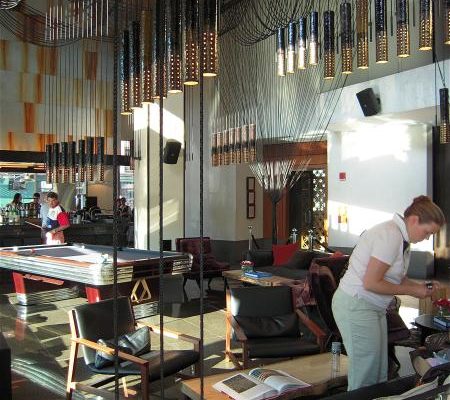 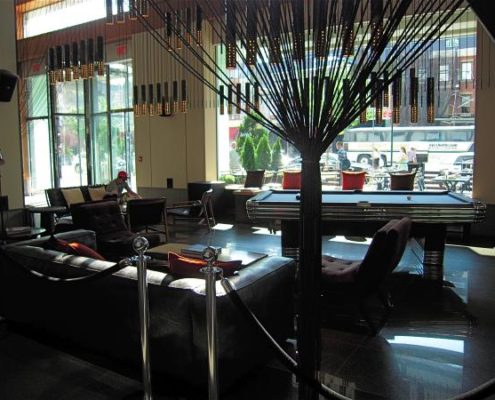 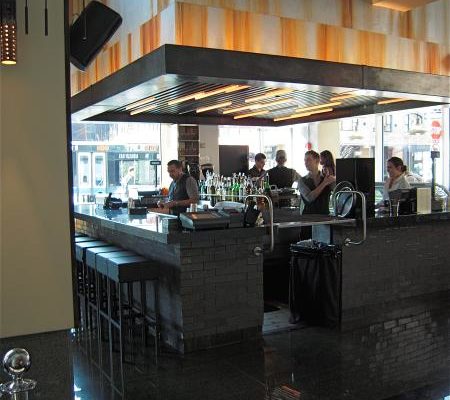 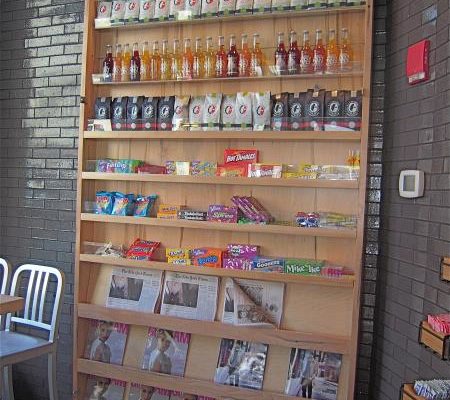 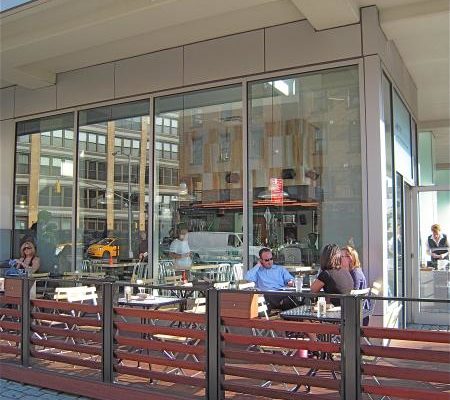 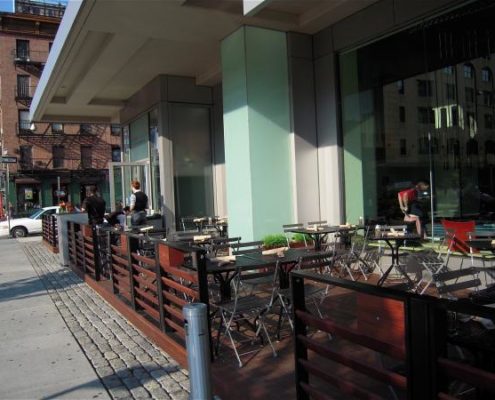 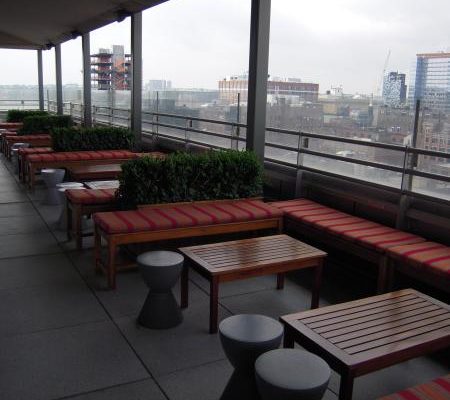 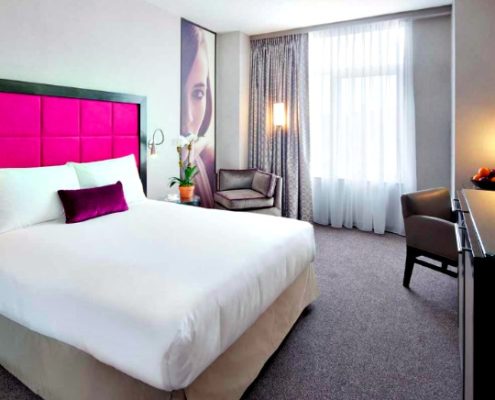