In what no doubt qualifies as one of the most low key hotel revamps in memory — no marquee unveilings, no press releases — Denihan Hospitality Group’s six Affinia hotels have quietly changed their names. 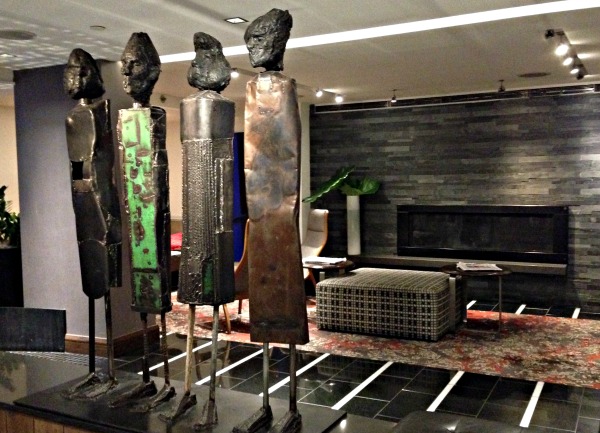 When a complete name is required, an Affinia Hotel is added. Behind the move was an effort “to emphasize the personality and location of our six properties,” said Cole Hernandez, Director of PR and Partnerships for Fifty NYC, in an email.
Given how different each property is the move makes sense. Unlike large chains like Hilton Garden Inn or

Courtyard Marriott, Affinia’s six hotels are united more by philosophy than appearance. (No house colors for these guys.) Similar amenities can be found at most Affinias, like an evening wine hour. And their smartly designed websites share the same DNA. But in terms of style and visuals the hotels don’t have a lot in common aside from a strong sense of individuality.

Manhattan NYC started life as the Governor Clinton, built as a Roaring 20s train hotel across from the old Penn Station, for example. In a previous life Fifty NYC, a residential hotel built in 1959, was called the Plaza (not that Plaza).

Several hotels in the group, including the Shelburne NYC and Dumont NYC, were originally part of Manhattan East Suite Hotels, a small mid-priced chain with big rooms. Benjamin J. Denihan, Sr., a successful owner-of-dry-ceaners turned even more successful hotelier, purchased the group and in 2003, renamed it Affinia and added a few new properties. The hotels are still known as the Affinia Hotel Collection.

But just like the big personality hotels run by Kimpton and Morgan, the singular sibs in the Affinia family are standing tall on their own, without the surname.

A New Name for a New(ish) Hotel: Good Bye, Fashion 26 — Hello, Hilton New York Fashion District
Where The Dogs Are: Three NYC Hotels Where You Can See Top Dogs From The 2016 Westminster Kennel Club Dog Show
The Affinia Manhattan’s Roaring 20s Lobby Lightens Up — And Looks Great
Affinia Manhattan Revs Up for the Westminster Dog Show with a Special Canine Suite
Freshening Up Affinia 50: A Mid-Century Hotel Goes Mid-Century Mod
Where Show Dogs Hang Out Before The Westminster Kennel Club Dog Show
1 reply

No Room in the Inn? Why Brooklyn Lost the 2016 Democratic Convention Another Trick Up The Virtual Sleeve Of The New Apple Watch: It Unlocks Hotel...
Scroll to top