On an impulse, I stopped by the Hotel Chelsea the week before it closed two years ago for what was supposed to be a one-year renovation. As it turned out, this was the Chelsea’s last hurrah as the much-loved, occasionally reviled free spirit of the New York hotel scene. 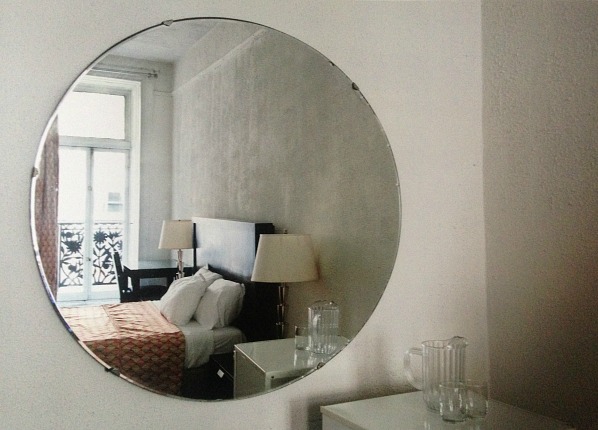 Room 123 as photographed by Victoria Cohen

A haven for the outlandish, the outrageous and the outsider, the Chelsea was the go-to meeting place, workspace, canteen and dorm for generations of the creative and the unconventional. Pick almost any 20th-century cultural light – Jack Kerouac, Leonard Cohen, Allen Ginsberg, Janis Joplin, Patti Smith, Sid Vicious, the Dylans, Bob and Thomas – and chances are good he or she checked in for at least a night. Drastic renovations never occurred, making it easy to imagine a sighting of an Arthur Clarke, a Robert Mapplethorpe or a matchbook-wielding Edie Sedgwick sauntering down those impossibly wide, much-painted hallways. 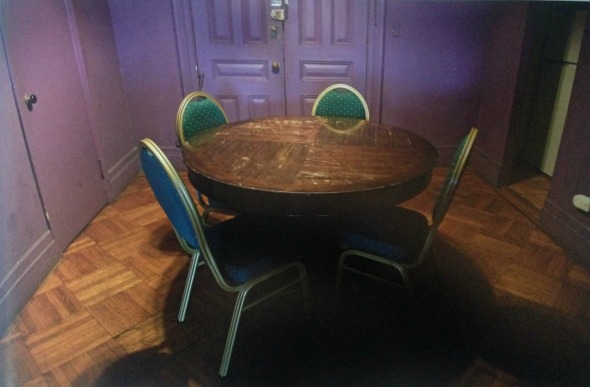 It was a hot day in July, and I sank into a sofa in the art-strewn lobby, drinking in the congenial scruffiness and admiring the dazzling collection of art the management accepted in lieu of payment from guests like Joe Andoe, Roy Carruthers and Larry Rivers.

Visitors traipsed by, many brandishing cameras. Most, I assumed, were tourists, but for all I know, one of them may have been Victoria Cohen, an artist and photographer who spent three weeks snapping every guest room at the hotel during its final days. 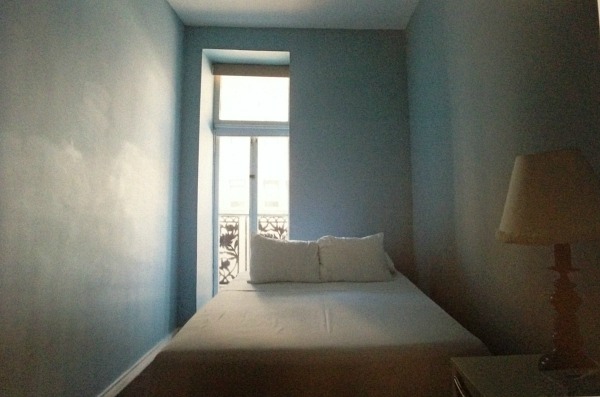 A native New Yorker whose photos are in numerous private collections throughout the world, Cohen stopped by for a last look when she heard the hotel’s days were numbered. Confronted by the hotel’s history, mystique and peculiar beauty, she decided to create a visual legacy of the old Chelsea before it disappeared forever. A long-time employee gave her the go-ahead – and a handful of room keys – and Cohen was on her way. The results can be seen in Hotel Chelsea, a gorgeous, ghostly time capsule of a picture book (Pointed Leaf Press; $95).

In addition, 30 photographs of the hotel, some as large as 40 by 60 inches and many not included in the book, are on view in Cohen’s one-person show at Third Streaming gallery in SoHo, September 17 through October 29. 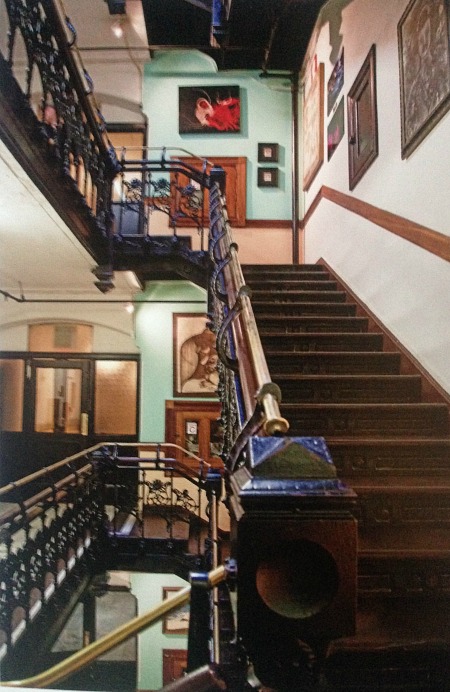 When I first heard about Cohen’s three weeks with the keys to the kingdom as the life literally drained out of the Chelsea it was hard not to feel a bit envious. I had spent a night at the Chelsea a while back, reviewing it for The New York Times. It wasn’t the Plaza, which opened four years after the Chelsea morphed from an apartment building into a hotel in 1905. But my room, while old and bereft of obvious creature comforts, felt good, with its generous dimensions and soft light streaming through the big windows. I liked the place, especially the lobby, where I sipped a deli coffee the next morning and watched the passing parade of guests and residents who were pure Chelsea.

Since I couldn’t get a final tour, I did the next best thing. I talked with Cohen about what it was like to have the run of the 106-year-old Chelsea – formerly New York’s second oldest continuously operating hotel after the Algonquin — and what she learned.

You originally just wanted to see the hotel before it disappeared. What made you realize you wanted to capture its final days?

Obviously everyone who lives in New York City, especially a native New Yorker who grew up downtown like I did, knows about the Chelsea. I was heartbroken when I heard it was closing and knew I wanted to do something about it. But when I started photographing the rooms it turned into an emotional and creative experience for me. I also began to feel a responsibility to the hotel. It was very moving be there. The rooms were host to so many different people with so many dreams, so many stories, so many ideas. But it was eerily quiet. When a guest checked out of a room, no one else checked in.

It would have been easy to make the rooms look like something out of the Bates Motel. But the rooms in your photos look like still life compositions.

I saw the rooms as portraits, so that’s how I shot them. I saw the furniture not as beds and chairs but as living things that had a presence.

The Chelsea furnishings were never the conventional hotel trappings you’d see at the Marriott. Much of it was generic, but a few pieces were quite beautiful, like the high-backed lemony green velvet chair you photographed.

That green chair. How many people sat in it? What were they thinking about in that environment? Was someone in there crying, thinking about disappearing? Or was someone sitting on that chair thinking about the novel they were going to write or the painting they were about to paint? That’s what’s so great about the rooms – the energy is there. Most of the furniture is not what you’d see in a regular hotel. But that is what made the Chelsea what it was. It was so eclectic, a mix of everything from 20th century modern furniture to antiques to crazy anything.

You photographed the rooms using natural light and a hand-held camera, a painfully slow process that often required long periods of waiting for the right moment.

I wanted people to look at these pictures as if they were in the room. Using a hand-held camera and natural light was very difficult at times because very little light was available. A lot of the rooms had only one light bulb. But I wanted the experience to be that you were there in the room with me.

Were you surprised by anything you saw as you moved through the rooms?

There are sinks in the corner of the rooms. That was interesting. When a place has sinks like that it means that the guests shared a bathroom down the hallway at one time. Some of the sinks were kind of rusty, but the place was really clean. It was well taken care of. It was just old.

Do you have a favorite room?

No, but I have a couple of favorite pictures. There’s a photo of a blue table with two black chairs on either side of it. You look at the picture and it’s as if those chairs are just waiting for you to sit down. There’s a lot of anticipation in that picture, with the phone on the table and the two chairs. Most of the room was beige, and that spark of color was really beautiful.

At the end of the book is a picture of a window. You’re looking out onto rooftops, brick buildings and sky. Depending on your experience, it’s either a picture of possibilities or it’s a picture of isolation. Someone can look at that picture and see it as kind of dark. And another person can see it and think, ‘Oh my God, I’m in New York, and my life is about to begin.”

There’s an old wooden shutter next to the window with blistered paint that seems oddly beautiful.

Right. But to some people that shutter may be creepy and gross. And that sums up what the Chelsea was. It depends on who you are. People went there for different reasons. Some people went there to fall off the radar. Some went there to become the greatest artist they could be. And that’s very representative of how people view the hotel. Someone may see it as a place that’s old and not well kept. But I see it as authentic and beautiful and full of history.

Update: Renovation at the Hotel Chelsea continues. This past summer the hotel was sold once again and will reopen at an undisclosed time as part of the King & Grove boutique hotel group, which includes the the King & Grove New York, formerly the Hotel Lola. But will they reconstruct the art-filled lobby?

All photographs above by Victoria Cohen.

$125,000 for a Second-Hand Door? Bidders Pay Dearly for 52 Original Doors from the Hotel Chelsea
The Algonquin Gets Set to Close for Refurbishment in Early 2012
Up for Auction, 52 Hotel Chelsea Doors Opened by the Likes of Bob Dylan, Mark Twain and Janis Joplin
The New York Hotel You’ve Never Heard Of That Inspired Georgia O’Keeffe’s Skyscraper Paintings
Is This The End? The Fabled, Troubled, Irreplaceable Hotel Chelsea Closes For Renovations
Where do Rock Stars Crash When They Play New York, Paris or Louisville, Kentucky? ‘Rock & Roll Hotels,’ a New Guide Book, Tells All
22 replies

Pass the Popcorn: What Movies Were the Biggest Hits in Hotel Rooms in August... A Touching, Dawn-of-the-Day-After-9/11 Dance Tribute from New York City Bal...
Scroll to top