And to think they were destined for the dumpster.

On Thursday night, an auction was held for 52 original doors from the Hotel Chelsea that were discarded when renovation began in 2012 and harvested by a resourceful former homeless man. And prices shot through the proverbial roof.

To wild applause from bidders and onlookers in a packed Ricco/Maresca art gallery, a battered, whitewashed door to a room once occupied by singer/songwriter Bob Dylan sold for $125,000, eye-popping even for an item associated with a Nobel laureate. 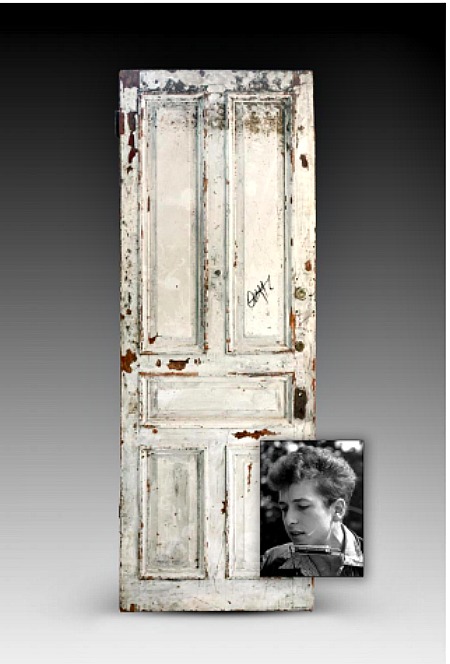 The door to Bob Dylan’s room at the Chelsea

Prices went downhill after that, but not by much.

Coming in at $106,250 was the door to the fourth-floor room where 60s pop icon Janis Joplin and singer/songwriter Leonard Cohen had an impromptu tryst in 1968.

The door to a room used at different times by actress/model Isabella Rossellini, 50s experimental filmmaker Shirley Clarke and Madonna sold for $16,250, the same price as the door to the room of 60s rock legend Jimi Hendrix.

Joni Mitchel didn’t write “Chelsea Morning” at the hotel, but her door still sold for $10,000. And doors used by Jamaican singer/songwriter Bob Marley and master Abstract Expressionist painter Jackson Pollock each brought $8,250. Talk about a one man’s trash/treasure moment. 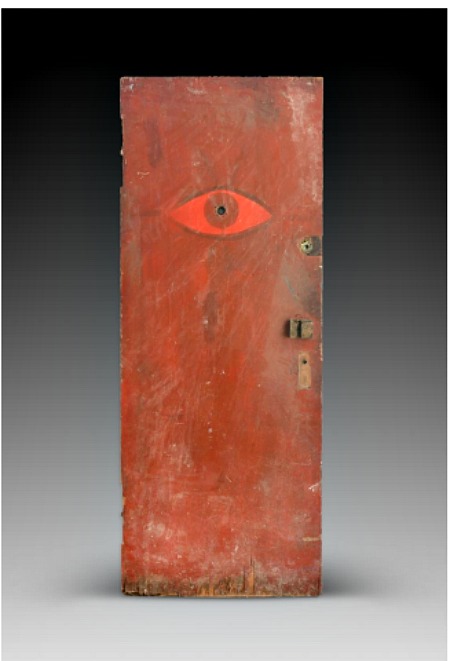 Red eye: an unattributed door harvested from the Hotel Chelsea

As a long-time Hotel Chelsea resident, Jim Georgiou, the doors’ rescuer, was wise to their intrinsic value, even if it wasn’t obvious to the naked eye. “For me they were history and beauty and connected to my heart,” he told The New York Times. “They’re precious because there are so many people who’ve been through them.”

Briefly homeless after being booted out of the hotel in 2011 for getting behind in his rent, Georgiou eventually landed across the street, where he watched a parade of debris leave the hotel as demolition unfurled. Hearing from construction workers that the doors were ready for the rubbish heap, he hired a truck and with the help of friends hauled them off to a storage facility. Goods in hand, he began tracking down the who-stayed-when provenance of each, a process that has turned him into an unofficial Chelsea Hotel historian. Along the way, he contacted Guernsey’s auction house. A portion of the sale, which handily topped $400,000, will be donated to City Harvest.

Georgiou was right about the inherent magic in those beat-up sheets of wood. Though he was able to find a star-kissed reference for only about half of the doors, that didn’t stop an intrepid bidder from plunking down $12,500 for an unattributed door. Painted red and embellished with the image of an eye, it was the most eye-catching door of the bunch.

A Last Look at the Hotel Chelsea – And a Chat with the Photographer Who Captured its Final Days
The Algonquin Gets Set to Close for Refurbishment in Early 2012
The New York Hotel You’ve Never Heard Of That Inspired Georgia O’Keeffe’s Skyscraper Paintings
Where do Rock Stars Crash When They Play New York, Paris or Louisville, Kentucky? ‘Rock & Roll Hotels,’ a New Guide Book, Tells All
Is This The End? The Fabled, Troubled, Irreplaceable Hotel Chelsea Closes For Renovations
Up for Auction, 52 Hotel Chelsea Doors Opened by the Likes of Bob Dylan, Mark Twain and Janis Joplin
0 replies

Up for Auction, 52 Hotel Chelsea Doors Opened by the Likes of Bob Dylan, Mark... Sleep in a Green Room: What Are New York City’s Most Eco-Friendly Hot...
Scroll to top