A. When it’s grouped with more than 4,000 others to create a grand-scale sculpture of New York’s Standard Hotel, aka The Candard Hotel.

Explainer: Each year at Thanksgiving the nation-wide Canstruction competition challenges designers to think up clever ways to fashion sculptures, the wittier the better, out of food cans. The edible creations go on display for a week or so before being dismantled and distributed to the needy. 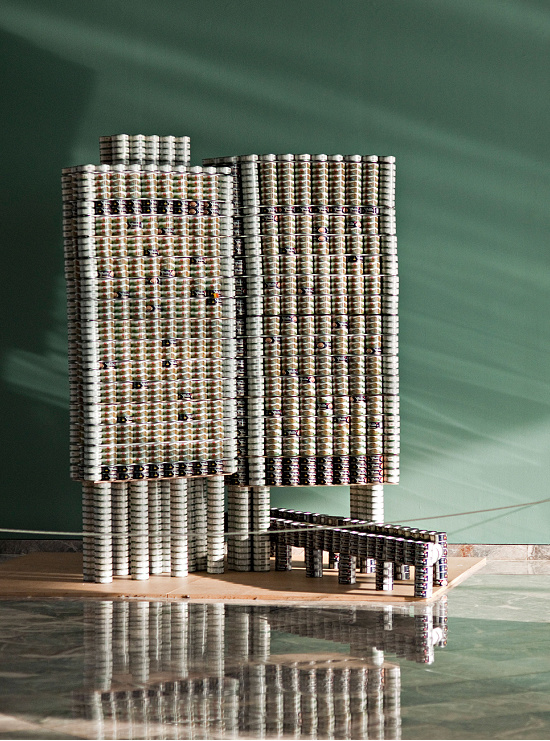 “The Candard Hotel” was one of 25 structures built from 101,369 cans of food in New York’s Canstruction competition, on view through Monday at the World Financial Center. Among our favorites were “I Think I ‘Can,’” a visual riff on “The Little Engine that Could,” and “Tomato Tornado,” a gigantic funnel constructed from canned tomatoes.

But we love hotels, so the Candard gets our vote. Constructed by DeSimone Consulting Engineers, the 4,056-piece structure comprised of canned tuna and canned green beans depicts the Standard’s double-rectangle structure as well as the High Line park, which ribbons below the hotel.  The deconstructed Candard, by the way, will  be donated to City Harvest and will feed 1,500 New Yorkers.

NYC Hotels to Check Out – or Into – for The Fourth of July
The Sheraton New York’s 50-Year Club and Throws a Party
Biting Into National French Bread Day at Sofitel NY
A Chat With Travis Chamberlain, Director of Tennessee Williams’ “Green Eyes” at Hudson Hotel
Holiday Eye Candy: The Sixth Annual Gingerbread Extravaganza Wafts Into Le Parker Meridien
Checking Out Times Square from the R Lounge at the Renaissance
1 reply

To Your Health With The Grand Hyatt New York’s New Craft Cocktails Me... What Can You Expect to See in Your Hotel Room Next Year? Scoping Out The International...
Scroll to top