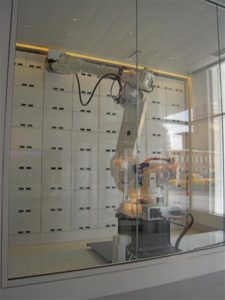 We’ll never know the identity of the enterprising employee who cleared his throat, stared down a guest and was remunerated for carrying a bag. But by the 1820s tipping the porter, like signing the register, was a ritual at hotels in New York and other big American cities.

Blame it on the buildings. Carrying bags wasn’t a problem for guests staying at small, squat colonial inns and taverns. But hotel architecture changed in the 1790s, with the advent of full-fledged hotels with complicated floor plans, writes A.K. Sandoval-Strausz in Hotel, An American History, a fascinating look at the evolution of the hotel.

With the first two floors consumed by an expansive lobby, grand ballrooms and spacious dining areas, guest rooms were relegated to the floors above. It became clear that guests would need help with their bags. (Elevators, aka “vertical railways,” didn’t appear until 1859 and were so costly only top-notch hotels had them.)

Enter the “rotunda men,” a new category of hotel employee first mentioned in the 1820s but probably around a lot longer. (The term bellhop originated in 1850s when the desk bell became the accepted way of calling porters.)

And tips? Routinely requested and routinely given. Hotels often forbade the practice, but wages were low, and workers won out. As the early 19th-century British tourist Emily Faithful noted, “The traveler who expects to be comfortable in an American hotel without a free distribution of dollars will soon be disenchanted . . . “

What about today? Tips are factored into hotel worker wages, so they’re expected – and appreciated. How much should you tip? NYCGo, the city’s official travel site, suggests $1 for hailing a cab, $1 to $2 per bag and $1 to $2 per — or as much as $5 — a day for housekeeping.

Not every hotel helper gets a tip. It costs $2 for the Yobot at the new Yotel Times Square to grab your bag and store it. That’s what you’d tip the porter if you’re so inclined. Consider it a mandatory tip for the ‘bot.

Best of the New: What We Saw And Loved at NYC Hotels in 2011
Is This The End? The Fabled, Troubled, Irreplaceable Hotel Chelsea Closes For Renovations
It Only Took 300 Years — Singing Handel’s Baroque Opera “Rodrigo” at the Gershwin Hotel
Trilby: The Cooper Square Hotel Tries Out (Yet Another) New Resaurant
A High-Profile Cameo for The Waldorf-Astoria, Co-Starring with Matt Damon in “The Adjustment Bureau”
“Fifty Bags That Changed the World,” A New Picture Book About Bags No Traveler Would Ever Check
8 replies

How NYC Hotels Are Coping with Mean Hurricane Irene Basil and Buzz: A First Look at the Intercontinental New York Barclay’s...
Scroll to top