High tea and texting don’t mix. That, at least, is how I felt on a recent weekday afternoon as I sipped Lapsang Souchong and nibbled miniature sandwiches in the Gotham Lounge at The Peninsula hotel.

Afternoon tea at a hotel is something of an anachronism, a last link to a “What is the weekend?” world. It’s the anti-fast food, offering a civilized setting for a business meeting, a cozy chat or a vacation from the 21st-century for an hour or two. 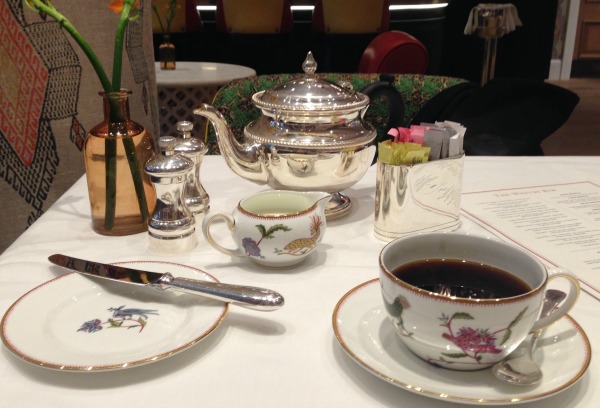 Its charms depend on getting the mix of old and new just right, a balancing act that’s oddly tricky. Too much tradition and high tea feels fusty.  Not enough and it’s not High Tea.

I don’t do afternoon tea at hotels very often. Still, I like knowing it’s there, like the Empire State Building. A surprising number of New York hotels do up a proper tea with finger sandwiches, sweets, scones, mounds of clotted cream and leaf-filled pots. Beats a teabag in a paper cup.

Never mind that interior design pioneer Elsie de Wolfe, aka Lady Mendl, never lived here. This comfy-grand tea salon in an 1834 brownstone that was once a speakeasy channels its namesake’s indomitable spirit — and love of creamy beige walls. The Inn at Irving Place, a house hotel with just 12 rooms, also channels de Wolfe contemporary Edith Wharton. The result? Tea at Lady Mendl’s is the next best thing to time travel if The Age of Innocence is your destination.  The quiet, high-ceilinged room, outfitted with silk sofas and low tables, feels like a cocoon. And the $35 tea is generous – five courses, from scones with clotted cream to cookies and chocolate-covered strawberries – even if it comes with a 90-minute time limit. Lady Mendl’s Tea Room at the Inn at Irving Place, 56 Irving Place between East 17th and East 18th Streets. 212 533-4466

Given The Carlyle’s stern, 1930 Art Deco edifice, who’d guess one of the city’s great fantasy rooms is tucked inside? The sultan’s dining room at Topkapi Palace inspired Renzo Monglardino’s designs for the exotic Gallery, where afternoon tea is served. True, the red velvet chairs and antique kilim banquettes are oddly threadbare, in a genteel way. That doesn’t bother the regulars — writers, editors, actors and East Side socialites — congregating around scones, outsize-finger sandwiches and Payard pastries served on Monglardino’s deliciously gregarious china. Bonus: you can order a full tea or a la carte items. The Carlyle, 35 East 75th Steet at Madison Avenue. 212 744-1600

Tea at The Plaza is such a tradition it’s almost a cliche.  But if you don’t mind gawking tourists traipsing past – ask for a table in the back if you do – it’s a pleasure to pull up a brocade fauteuil  at a white-clothed table and gaze up at the magnificent glass ceiling in the exquisitely restored Palm Court. Alas, the violinists are gone – but so are the stale tea cakes. Gone, too, is the outrageously expensive tea dating from the hotel’s renovation in 2007. The four streamlined replacements hit the right notes – two full classic teas ($45 each), a chocolate tea (chocolate fondue, chocolate truffles, cupcakes, scones with Nutella; $55) and a three-course $28 Eloise tea with lemonade for kids. The Plaza, Fifth Avenue at Central Park South. 212 546-5300

Afternoon tea as spectacle? Well, yes, when it’s served on the 35th floor by a wall of windows overlooking Central Park and midtown’s most iconic buildings. As befits a gleaming skyscraper hotel less than 10 years old, the Mandarin Oriental’s Lobby Lounge, where tea is served, is modern and sleek with streamlined slipper sofas, low tables and not a fauteuil in sight. It feels contemporary and glamorous. The $38 tea dutifully touches all the bases – scones made with Devonshire cream, sandwiches, cookies – but the showstopper, besides the view, is the brew.  Befitting a hotel chain launched in Asia, China teas rule. I took a sip of jasmine, closed my eyes and was whisked back to Hongkong’s old Mandarin Hotel in the 1980s.  The Mandarin Oriental, 80 Columbus Circle at 60th Street. 212 805-8800

Tea and tranquility are the specialties of the Lowell’s Pembroke Room, where afternoon tea is served against an oh-so-English backdrop of crystal sconces, ruched curtains, white tablecloths and gleaming hotel silver.  You don’t come to the Lowell for surprises, but you can expect comfort, thoughtful service and scones that melt in your mouth. You can also expect grace notes, like Picard china egg cups holding lemon curd, marmalade and Devonshire cream. Tea choices abound including our favorite, smokey Lapsang Souchong, which isn’t served everywhere.  At $44.95, the full tea is not cheap – and the pastries aren’t perfect – but you can make a long, leisurely afternoon of it. The Lowell, 28 East 63rd between Madison and Park. 212 838-1400

Since it’s owned by Brits, it’s no surprise the Crosby Street Hotel serves an English afternoon tea – all day ($34). Hotel teas are a rarity in SoHo.  But you can take tea in the drawing room, a delicious, updated riff on a classic Victorian parlor. Or order it up in the restaurant or bar, an equally fanciful setting adorned with Warhol-esque portraits of the Queen. You can also order a solo tea ($5), choosing from eight brews and eight infusions and drink in the atmosphere without spending the afternoon — or breaking the bank. And yes, they have Lapsang Souchong. Crosby Street Hotel, 79 Crosby Street between Prince and Spring; 212 226-6400,

The Peninsula rolled out a new afternoon tea in the fall of 2012 that’s over the top in all the right ways ($55). In an art-filled room that’s serene, high ceilinged and lightened by big domed windows the Peninsula tea updates and amplifies all the basics — almond scones that taste like marzipan (classic raisin scores are also served), miniature sandwiches on five  types of bread, pastries created with seasonal ingredients, like mini pumpkin cheesecake and round little apple cakes crowned with white chocolate slivers glazed orange for the fall. Special pastry plates are offered from time to time, like the pink tea pastries served during October, Breast Cancer Awareness month. (They looked like confections created for the Sugar Plum Fairy.) There’s also a children’s tea with chicken fingers, peanut butter and jelly sandwich, mini cupcakes, chocolate-covered strawberries and hot chocolate ($27). The Peninsula, Fifth Avenue at 55th Street; 212 956-2888

Reservations are required at Lady Mendl’s. For the rest, walk-ins usually get a table but it’s best to reserve.

“Mindfulness” — A New Exhibit Under Glass at the Roger Smith Hotel
Tuning Up Your Toe Loop: The Best NYC Hotels for Ice Skating
What Can You Expect to See in Your Hotel Room Next Year? Scoping Out The International Hotel, Motel and Restaurant Show
Who Needs a Bartender (or a Chef)? These Three NYC Hotels Put You to Work (In a Good Way)
Was that the Tribeca Grand On View for a Blink in “Blue Jasmine?”
Style Arrives on Kenmare Street: A First Look At The Nolitan Hotel
2 replies

Green Hotels: Two Organizations That Give New Life for Used Bars of Hotel S... Three NYC Hotel Designers Discuss Their (Gorgeous) Handiwork at the Museum of...
Scroll to top