Aloft Harlem aims to change that. On December 2, this tall, skinny link in Starwood’s fast-growing chain of hip-on-the-cheap hotels – think W on a budget – opens its big glass doors.

And just like that, 124 rooms north of Central Park are yours for the asking – and $239 a night through the end of the year. 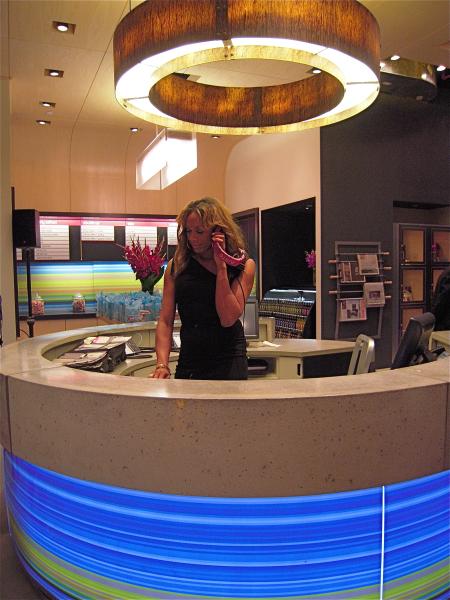 With 40 outposts from Abu Dhabi to Austin, Alofts pop up all over the world. But Harlem is the first New York foray (look for Aloft Brooklyn sometime next year).

I attended a preview party this week for a sneak peek.

Like chains in this range, Aloft’s siblings flaunt a one-size-fits-all, cookie-cutter appearance, a money-saving measure for the owners. But these are smart cookies, designed by uber-hotel architect David Rockwell. Built from the ground up – and up and up (condos are on top), the Harlem sports a big, open, high-ceilinged lobby, zingy colors and snappy toys – pool table, DJ equipment, electrical outlets galore and blatantly cool club chairs.

Instead of a restaurant, a grab-and-go hawks drinks and snacks.  Drinks trump food.  Winking

LEDs, an Aloft signature, light up a statement bar backed by rainbow light panels (party libations included a iced tea vodkas and mojitos).  We get it. The intent is to create a nightclub vibe. Live entertainment, including music by Harlem jazz musicians, is planned for three times a week, general manager Daniel Fevre told me.

Local tweaks are, in fact, a hallmark of mega-city chains, so what distinguishes Harlem from other Alofts? A lobby skylight, that extra-big bar and a flatpanel-screen faux fireplace instead of the real thing (a space issue, apparently). Hmmm. On a more, well, local note, the lobby will display a wall of for-sale work by Harlem artists.

Upstairs, you’d be hard-pressed to know you’re in New York unless you look out a window – easy to do because windows are big. (One room I visited stared smack into the rooms of the condo next door, very Rear Window.) But while uniform, rooms are roomy – big for the bucks – with smart, space-enhancing built-ins (a simple wall-long wood ledge serves as a desk, dressing table and surface for stacking, or stashing, bags, books and laptops).

Wood headboards displaying built-in art – the only art in the room – crown the platform beds, a king or two queens in each room.  There are no suites — or rollaway beds (air mattresses are available for extra guests).

European-style shelves, stocked with magazines and a coffee maker, flank the compact closet, curtained with a smart fabric swath.

In the simple, small-but-well-laid-out open bathroom, a handsome mirrored door slides shut to afford privacy. Instead of mini shampoos and conditioners, showers are equipped with built-in canisters of Bliss products.

Rooms, which include free WiFi,  will cost 15 to 20 percent less than comparable hotels in Midtown, we’re told. What’s the trade-off? You’re 24 blocks north of Central Park and a hike from the nearest subway.

But 125th Street, Harlem’s main artery, is a hop away as are numerous buses, the Studio Museum of Harlem, Magic Johnson’s multiplex movie theaters and the fabled Apollo Theater, where Aloft held “tryouts” for staffers. Oh, and the Hotel Theresa, now home to a MAC Cosmetics shop, is just a few blocks away.

"Mindfulness" -- A New Exhibit Under Glass at the Roger Smith Hotel
Trip Advisor Rounds Up Its Best Hotels of 2012: How Did NYC Hotels Fare?
Fresh Flowers -- The Ultimate Hotel Freebie For All -- At The Plaza
How NYC Hotels Are Coping with Mean Hurricane Irene
A New Name for a New(ish) Hotel: Good Bye, Fashion 26 -- Hello, Hilton New York Fashion…
Trilby: The Cooper Square Hotel Tries Out (Yet Another) New Resaurant
1 reply

#OnlineOneophilia: The Four Seasons Turns To Twitter For A Wine Tasting Sipping Mrs. Lilley’s Pumpkin Pie, The Ultimate Holiday Drink, at the...
Scroll to top