At a glance: Though it opened almost 20 years ago, SIXTY SoHo is one of those lucky properties with cool baked into its DNA. Back in 2001, it was a harbinger of SoHo style fortified by designer Thomas O’Brien’s chicly casual millennial designs defined by sophisticated colors, mid-century modern inflections and big-shaded floor lamps that were sleekly startling at the time.

The years have been kind, and a smart international crowd still frequents the place, which can feel like a small hotel in the best sense of the term. And following a clever — and thoughtful — refresh by London designer Tara Bernerd (Thompson Chicago, Swissotel Basel), SIXTY flaunts an updated version of the understated luxury and Bohemian chic it’s known for.

The sizable second floor lobby, a clubby living room with low sofas, square-cornered club chairs and classic paned SoHo loft windows, cocoons you from SoHo’s chilly trendiness and commercialism. Tables front several of the tufted velvet sofas, so you can plant your laptop. And to avert boredom or move along the conversation, the low bookcases are well stocked with coffee table classics.

The freshly designed Butterfly bar offers a jolt of glamour adjoining the lobby and jumps at night. And A60, the fabled rooftop bar atop the 13th floor, serves up mouth-watering views (Empire State Building, Hudson River, Brooklyn Bridge) from two terraces for card-carrying members and registered guests; in keeping with the thriving trend of guest-only amenities, it’s a sweet one.

Rooms: They’re serene, with welcoming beds dressed immaculately in white Sferra sheets. Larger rooms and suites exist, but mine was the smallest room in the house, a standard queen situated in the back of the building looking onto SoHo’s low buildings (sleek Venetian blinds softened the all-too-urban view).

Two people could happily spend one night here, though they’d probably hate each other after more than one night in such close captivity. But the marble bathroom, outfitted with a mosaic floor, a tub/shower combo and an imposing pedestal sink, was quite spacious.

Food and drink: Bistrot Leo, a chic French bistro with a menu from Bar Boulud alum chef Brian Loiacono, is the latest occupant of the hotel’s ground-floor restaurant space (long-time Thai restaurant Kittichai and short-hitter Sessanta were its predecessors). The look is cleaned-up Franco-cozy with red and white check floor tiles, aqua banquettes, cane-backed chairs and framed mirrors and artwork on the walls. Dig into escargot with garlic and butter, steak frittes, lobster Nicoise and hamburgers.

Surroundings: The hotel is in the thumping heart of SoHo, but Thompson Street is one of the neighborhood’s quietest and least blatantly commercial, lined mostly with one-of-a-kind shops like the Hat Shop, Chelsea Girl vintage clothing and Le Corset by Selima. Scores of restaurants are nearby.

The hotel is convenient to anything Downtown, including Nolita, Tribeca and Greenwich Village and cultural institutions like Film Forum and the New Museum. The Meatpacking District and Chelsea are a short hop uptown, the Financial District, South Street Seaport and Battery Park loom a brief hop downtown. Subway stations are several blocks away as are bus stops.

Back story: 60 Thompson, to use its original name, had the incredibly bad luck to open its doors on September 10, 2001 but recovered smoothly. Even the site, home to a brick storage building on a once-scuzzy SoHo block, proved fortuitous: Thompson Street between Spring and Broome is one of SoHo’s least commercial blocks and a reminder of the area’s quieter, cooler days as an artist’s haven.

The hotel was the first link in hotelier Jason Pomeranc’s growing chain of high-profile boutiques that now include 6 Columbus and Thompson LES, among others, and goes under the moniker Sixty Hotels. The 2013 name change from 60 Thompson to SIXTY SoHo is part of a long story of the Thompson Group’s merger — and subsequent unmerger — with San Francisco’s Joie de Vie hotels. The irony? Thompson Hotels group no longer includes 60 Thompson, the reason the group got its name in the first place. As for the hotel’s new name, SIXTY SoHo is fine, but must it SHOUT?

Keep in mind:  A60 does lots of private parties and is often closed to guests. 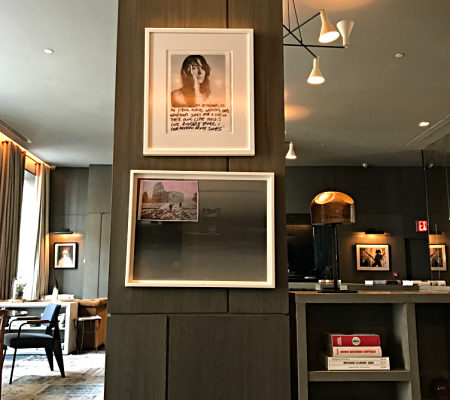 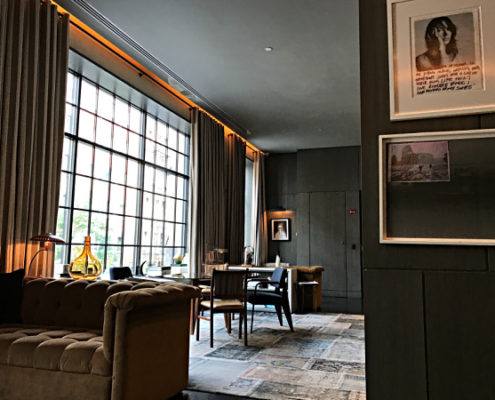 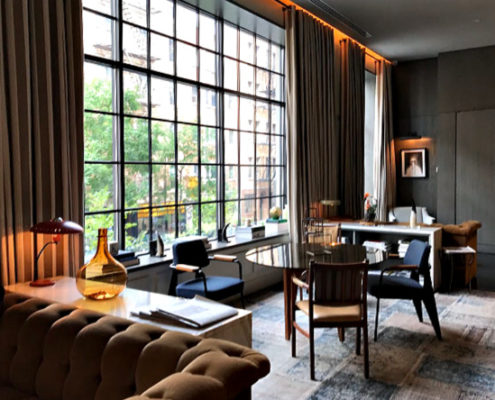 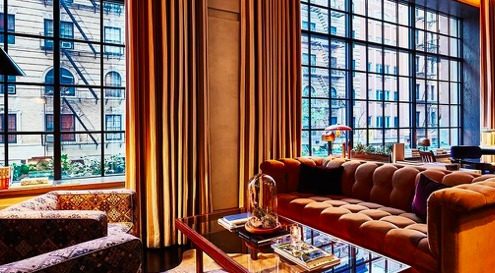 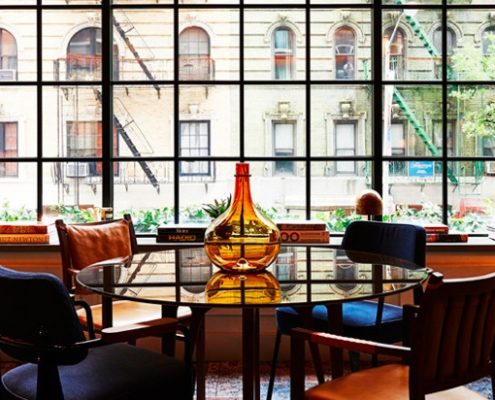 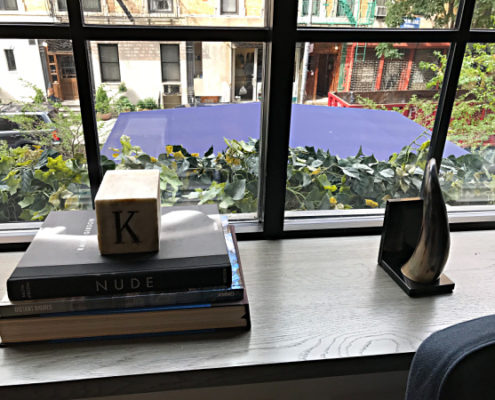 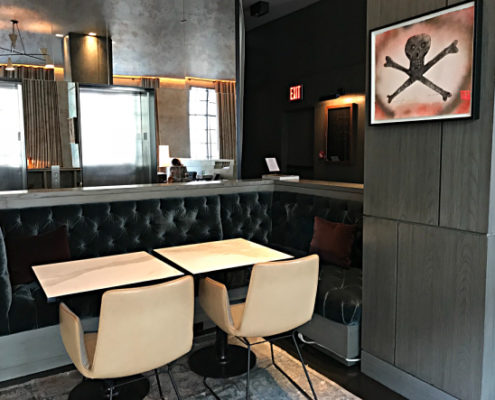 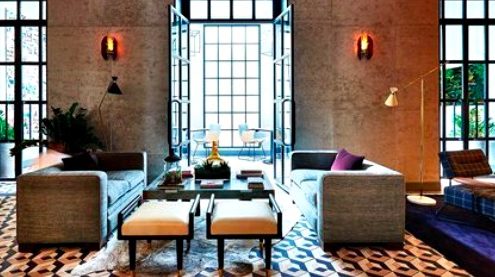 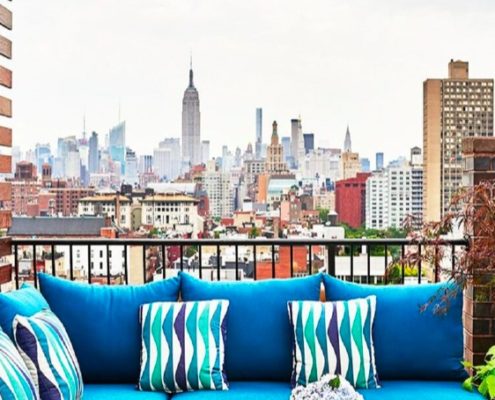 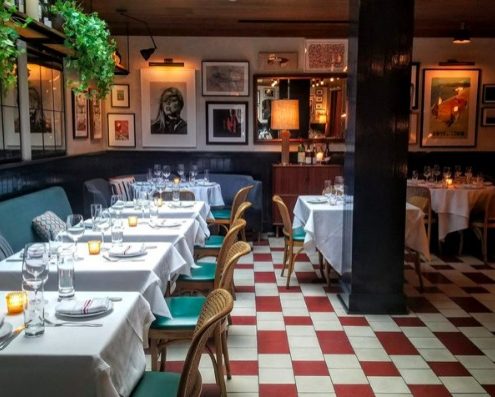 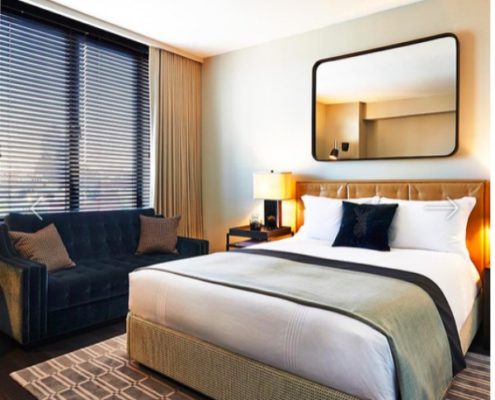