At a glance: Even in the daytime the Empire Hotel reminds us of a nightclub.

The soaring lobby of this classic brick West Side hotel — admirably situated across the street from Lincoln Center — is a glamorous black-and-silver lair with high-backed velvet sofas, geometric prints galore, a black-and-white stone stripe floor and pale gray taffeta curtains stretching from the mezzanine to the ground like a strapless Badgley Mischka gown.

Ramping up the glam quotient is a grand stone staircase framed by a curtain, the perfect backdrop for your entrance if you’re a bride, a hip-hop queen or Serena Williams (we saw her at a party here prior to the US Open). Drinks are served in the moody/glam bar tucked off to the side.

The mezzanine overlooks the lobby. With a fleet of high-blacked velvet sofas, there’s always a place to sip a cocktail, leaf through a magazine or scan the often interesting crowd that includes a mix of international guests, Lincoln Center performance-goers and hip/stylish party-goers (the rooftop bar is a private-events mecca).

This lobby is looking better than it has in years thanks to a refresh at the end of 2018.

But the lobby isn’t everything. Rooms are in need of a major redo. The result is rock bottom prices if your timing is right. Still, if you’re picky or plan to spend hours on end in your room, look elsewhere.

Rooms: Romantic and chic (if brown and gold are your colors). Queen rooms are extremely small — and can be dark on low floors — but make every inch count. A handsome leather headboard backs the Frette-sheeted bed (a soft throw is folded at the foot), the brown leather desk is big enough for work, and an ultra-suede curtain covers the compact closet. A flatscreen TV is mounted on the wall and a starburst mirror, the ultimate mid-century-mod detail, winks from a wall. Bathrooms, small, cool and outfitted with L’Occitane toiletries, resemble Finnish saunas. The tiles look like wood, and showers have rainfall heads and wood-slat floors.

King-bed rooms can be oddly shaped but are more spacious. Crave direct light? Most rooms with two full beds overlook the street. But rooms large and small are showing signs of wear.

Food: Ed’s Chowder House, the hotel’s long-time mezzanine restaurant, has closed. But the building also houses P.J. Clarke’s, a branch of the famous New York Midtown pub. It’s’s bustling, comfortable and serves up serviceable American fare like hamburgers and oysters. Fun fact: in its previous incarnation as O’Neal’s Balloon, the restaurant had a pivotal bit part in the film Annie Hall. And the Lincoln Center area is jam-packed with restaurants in all styles, cuisines and prices. You won’t starve.

Drink: The aforementioned lobby bar serves coffee in fine china. But with Starbucks next door, you see mostly paper cups with mermaids, as well as stiffer drinks.

The showstopper is the Rooftop Bar 11 stories above ground, serving drinks on the deck or in a window-lined room. We love the big EMPIRE HOTEL sign in red neon letters suspended above the terraces. Warning: the place gets noisy.

Amenities: The rooftop plunge pool, available only to guests, is the marquee amenity even if it’s so narrow it looks like a stripe and is closed during the winter (it isn’t heated). It’s known to close without notice, so contact the hotel before you book is swimming is important to you. The wood deck features private cabanas guests can rent, outfitted with flatscreen TVs, mini fridges and daybeds. The fitness room is small but nicely appointed. A small business center with computers is off the lobby. Pets allowed ($100 non-refundable).

Surroundings: Culture heaven. The hotel is across the street from Lincoln Center and is close to several movie theaters, Time-Warner Center (up-market mall shopping, Jazz at Lincoln Center and one-of-a-kind restaurants such as Thomas Keller’s Per Se) and Central Park, and is not far from midtown shopping and Broadway theaters. The area around the hotel is saturated with restaurants, from the bustling Smith brasserie to sleek Boulud Sud with elegant Mediterranean food. Bus stops are a block away. The subway is a short walk.

Back story: The Empire dates from 1915, and like the neighborhood –West Side Story was set here — has had a zillion incarnations. I first stayed here in 1990 during the hotel’s chintz-covered mid-priced period, when the lobby was Tudoresque with no place to sit, rooms were outfitted with dark wood TV armoires and awash in floral prints, and electric outlets were scarce (to listen to the radio I had to unplug a lamp). The place degenerated into a scary budget hotel, changed hands once or twice, closed for extensive renovations and reopened in late 2007, much improved. The current owner, real estate mogul Joseph Chetrit, owner of the iconic-but-troubled Chelsea Hotel, came on board in May 2011.

Keep in mind: The hotel levies a daily $19.95 “residence fee” on every room. WiFi can be iffy. 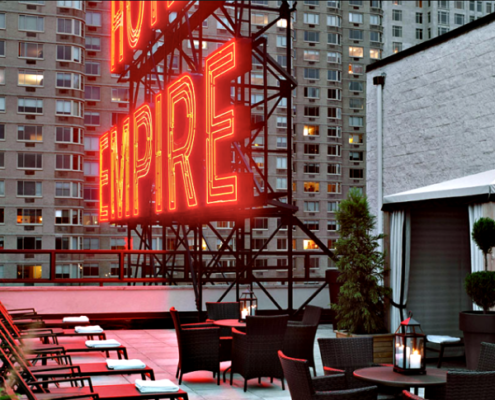 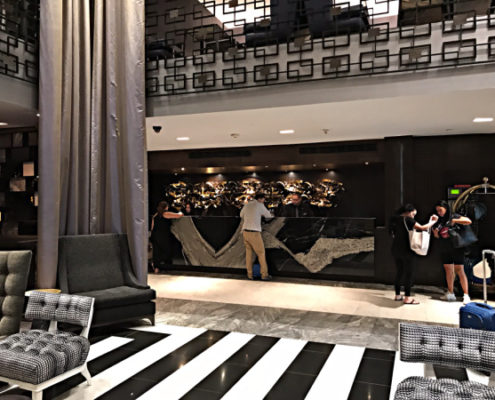 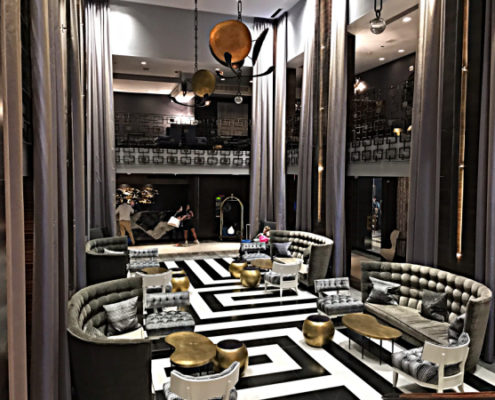 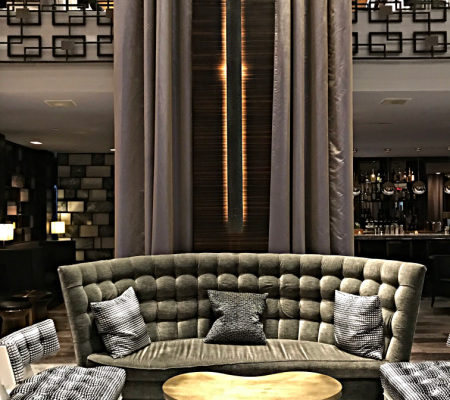 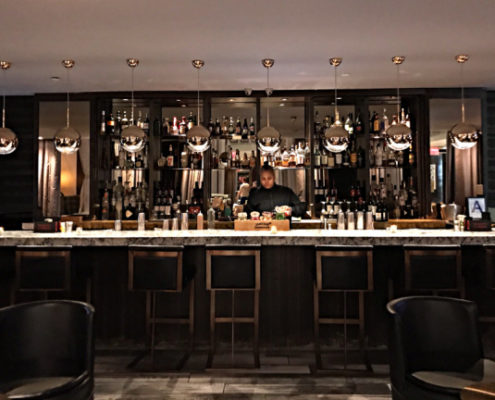 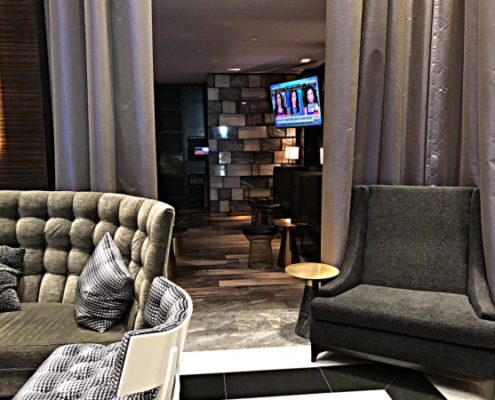 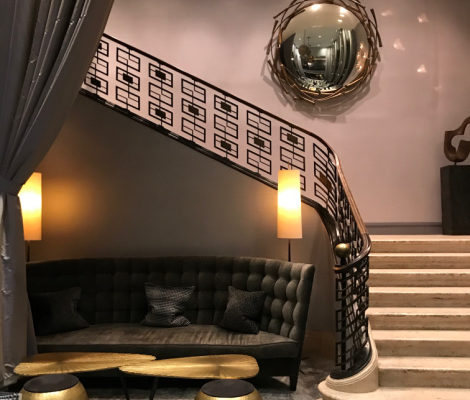 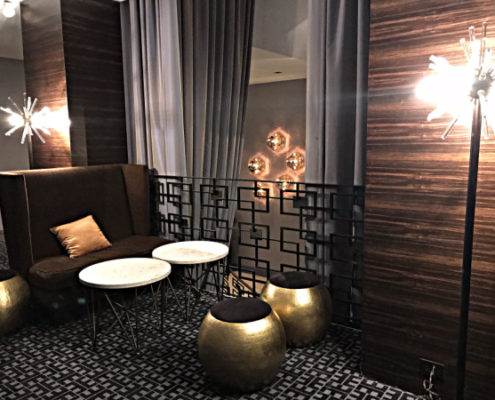 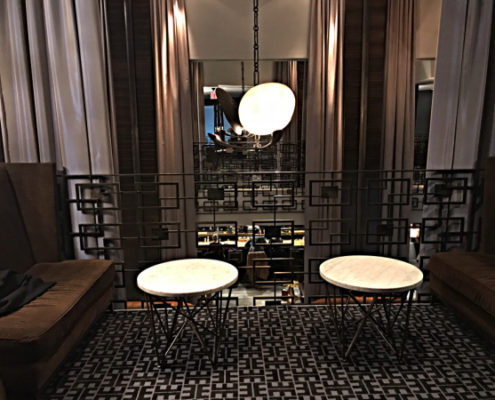 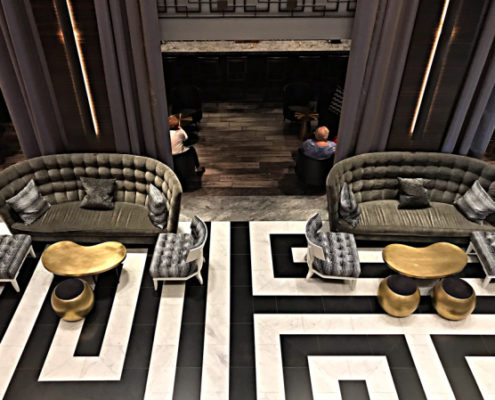 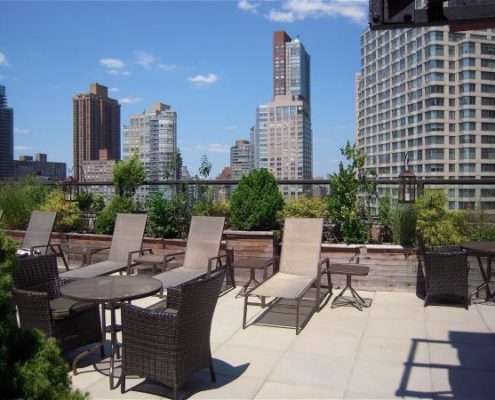 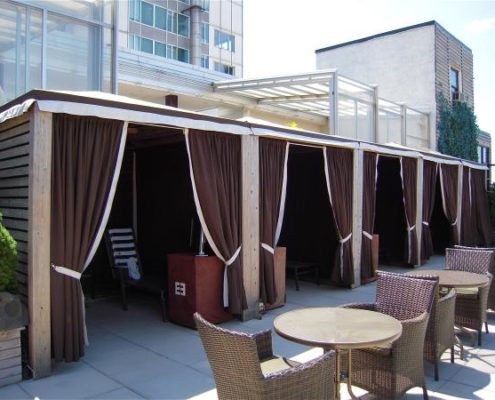 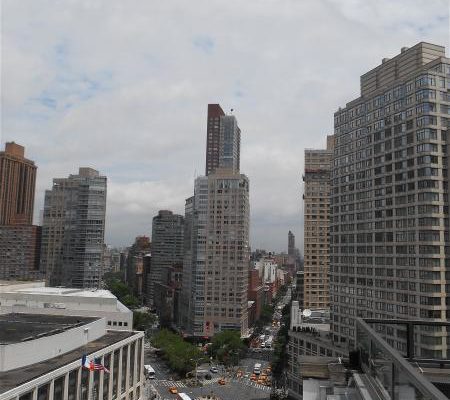 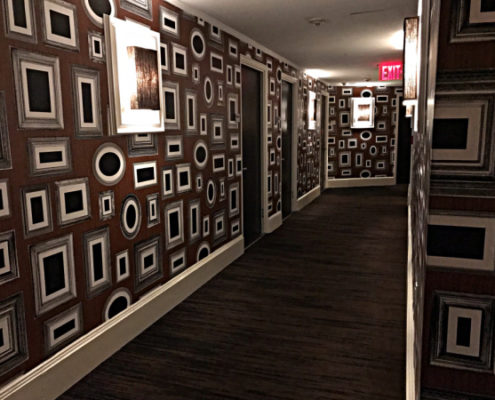 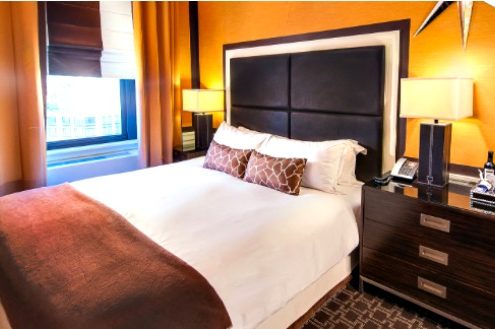