She’s the long-time mascot of the Algonquin Hotel, the coolest hotel cat in town. But when we stopped by the hotel yesterday, the only Matilda we saw was this drink – a golden $20 concoction of tangerine vodka, Cointreau, fresh lemon and orange juices and Korbel Brut named for the Algonquin’s fabled feline.

As reported in the New York Post, Matilda the cat was banished from the hotel’s clubby lobby 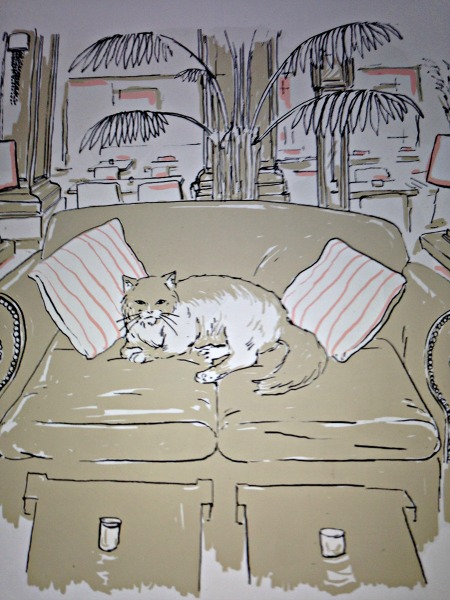 Matilda — from the book “Matilda , the Algonquin Cat’

lounge where she – and her nine predecessors – sauntered silkily among the sofas and club chairs and occasionally, when the mood struck, cozied up to guests. Though a cat has had the run of the Algonquin’s public spaces since 1932, when the staff took in Rusty, an orange tabby who drank milk from a champagne glass, the hotel reined in Matilda following a nudge from the city’s Department of Health & Mental Hygiene, which deems it unhealthy to allow animals in restaurants.

A “Grade Pending” sign in the hotel’s front window indicates the DOH spotted several health code infractions during a recent inspection (the hotel will receive a final grade after a follow-up inspection).  The DOH has slapped several high-profile hotels with low marks – the Ritz Carlton Central Park’s BLT Market initially landed a dreaded C though it now has an A – a fate the Algonquin, no doubt, wants to avoid.

So where is Matilda? “She’s on vacation,” a porter told us before admitting

she was upstairs, “out of harm’s way.”  She won’t be roaming around the lounge when she ventures into the lobby thanks to a  new wireless pet fence installed discretely at the entrance. Matilda now sports the corresponding collar, and you know the rest.  The best time to see her is early in the day, the porter said, when she visits her old haunts like the food-free check-in desk and the ornamental tile entryway.

Will Matilda be checking out of the Algonquin? Not if the hotel’s Facebook fans have a say. “Has NYC lost its mind?” wrote one.  “Hope all works for Matilda. She is so much a part of the hotel,” wrote another.  The hotel has never underestimated her marketing clout. Consider the Algonquin’s Friends of Matilda package which includes a plush toy Matilda and a 10 percent room discount (two night minimum). When Matilda turned 15 last summer, the gossip columns covered her party.

A platinum blond with attitude, Matilda II retired after her birthday soiree. The North Shore Animal League, an animal rescue shelter, provided her youthful successor, Matilda III, a fluffy gray beauty.  She’ll no doubt swan around in the prescribed areas, nose and tail in the air, until the Algonquin closes for renovation on January 1, 2012.

But will Matilda be back when the hotel reopens at the end of April? We hope so since that would be purr-fect.

LobbyFriend, a New Travel App, Aims to Bring Social Media to Your Hotel Lobby
Sipping a Vieux Carre at the Royalton’s Forty-Four Bar
Socialites, Lapsang Soochang and Carla Bruni — A Night at The Carlyle
Composer and Cabaret Artist Jimmy Roberts Performs at the Keyboard in Afterglow Series
Fresh Flowers — The Ultimate Hotel Freebie For All — At The Plaza
The Quin – Short for Quintessential — Makes a Glamorous Manhattan Debut
2 replies