Did Herman Melville dream up the first themed boutique hotel?

Never mind that this was never his intent. But I’m rereading Moby-Dick, and it’s hard to ignore what we know about modern-day hotel design when Ishmael, roaming around New Bedford, Massachusetts looking for a bed for the night in Chapter 2, spots The Spouter Inn, “the dilapidated little wooden house” that “was the very spot for cheap lodgings.” (Our narrator had already dismissed The Crossed Harpoons and Sword-Fish Inn as “too expensive and jolly.”)

The Spouter Inn as imagined in pen, brush and ink by Rockwell Kent in 1930.

If the names aren’t enough to conjure up themed lodging, consider Melville’s description of the Spouter Inn as Ishmael wanders in.

“You found yourself in a wide, low, straggling entry with old-fashioned wainscots, reminding one of the bulwarks of some condemned old craft.”

An attention-grabbing oil painting, “thoroughly be smoked and every defaced,” depicts a fight to the death between a ship’s crew and a gigantic whale, in a hurricane no less.

Keep going and you encounter “the opposite wall of this entry hung all over with a heathenish array of monstrous clubs and spears. Some were thickly set with glittering teeth resembling ivory saws; others were tufted with knots of human hair.”

But the most irresistible detail is saved for the bar. “There stands the vast arched bone of the whale’s jaw, so wide a coach might almost drive beneath it. Within are shabby shelves, ranged round with old decanters, bottles, flasks; and in those jaws of destruction, like another cursed Jonah (by which name indeed they called him), bustles a little withered old man, who, for their money, dearly sells the sailors deliriums and death.” 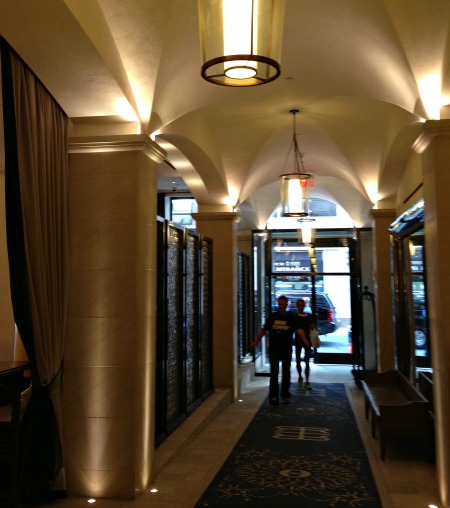 The lobby of the Refinery, a hotel in a former hat factory featuring millinery-inspired details

The decor deftly combines souvenirs from the hunt with symbolism and a generous helping of foreshadowing. But it’s also a literary template for almost every themed hotel I can think of, never mind that the 21st-century iteration is considerably more upmarket. Consider the Library Hotel, where the book-filled rooms are numbered according to the Dewey Decimal System (it’s steps away from the New York Public Library). Or the Refinery, a former Garment District hat factory that sports carpet runners bedecked with images of military accoutrements and a rough-hewn floor harvested from the wood of the building’s former water tower. And on the back lobby walls? Vintage rendering of women in fetching chapeaux straight out of Vogue, the hat factory hotel equivalent of a smoke-blackened whaling painting at a storied 19th-century inn.

I’d be astonished if hotel designers like David Rockwell, Philippe Starck or Roman & Williams considered themselves aesthetic disciples of Herman Melville, but think about it. His Spouter Inn is so vivid, so evocative, so packed-to-the-gills with 19th-century seafaring lore you can close your eyes and, once you steel yourself, picture checking in or gazing up at that whale jaw and ordering something lethal in a tumbler. It’s easy to conjure up the images on Pinterest (you won’t find them in Architectural Digest). The details are meticulous, the atmosphere air-tight. A hotel doesn’t need a theme to be memorable,  but it should tell a story. Melville, as it happens, wrote the book on it.

More Light (for now) at Le Parker Meridien, or What Happens When They Knock Down the Building Next Door
Want to Pay $100 for a New York City Hotel Room?
7 New York Hotel Libraries That Make You Want To Curl Up With A Book
From E-books to Beyonce — The Best of the New at New York City Hotels, 2013 Edition
Want to Stage a Fashion Show During New York Fashion Week? Check Into a Hotel
What NYC Hotels Do Tripadvisor Reviewers Like Best?
4 replies