The Gregory, the Garment District’s newest hotel, boasts a book-lined lobby with sky-high ceilings, an inviting bar that does daytime duty as a coffee bar and 132 black and white guest rooms.But its most winning asset is the glamorous history embedded in its freshly painted bones. 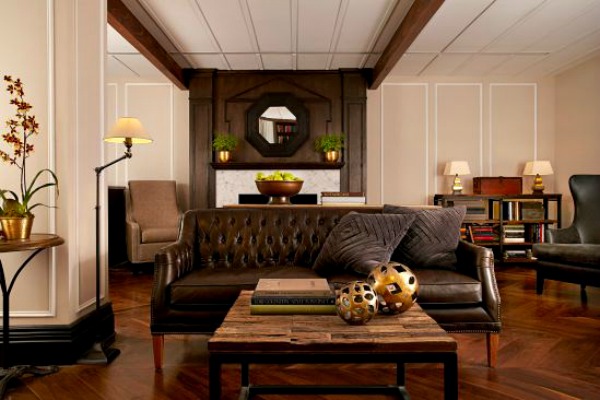 Be seated in the Gregory lobby

The hotel, standing mid-block between Fifth and Sixth avenues on 35th Street, opened in 1903, just a year after The Algonquin. Called The Gregorian, a wink at co-owner C.F. Gregory, a Syracuse hotelier, the hotel was “elaborately decorated, especially the restaurant and reception rooms on the ground floor,” The New York Tribune proclaimed. Hotel bait, in other words, for guests looking for a less overwhelming (and less expensive) alternative to the bustling society behemoth situated on Fifth Avenue and 33rd Street, aka the Waldorf-Astoria in the pre-Empire State Building days.

With stained glass windows and a classic Palm Court (the Edwardian counterpart to wide-beam wood floors and a roof bar), the Gregorian was sufficiently patrician to house the overflow when the Waldorf was full up. The two hotels even shared similar back stories. Both stood on land formerly occupied by grand brownstone mansions demolished to make way for commercial enterprises.

Alas, the years were unkind. As fashionable Manhattan — and the Waldorf — moved uptown, the Gregorian’s fortunes changed. It closed out the century as a Comfort Inn, then morphed into the modest Hotel 35 with rooms wallpapered in burnt orange. Guest dining needs were met by the greasy deli next door, a far cry from the Gregorian’s wood-paneled English Room with its four-course prix-fixe lunches laden with Little Neck Clams, Braised Beef Tongue, Peas and Carrots and Apple Cake with choice of coffee, tea, milk or buttermilk as touted in a 1915 brochure. 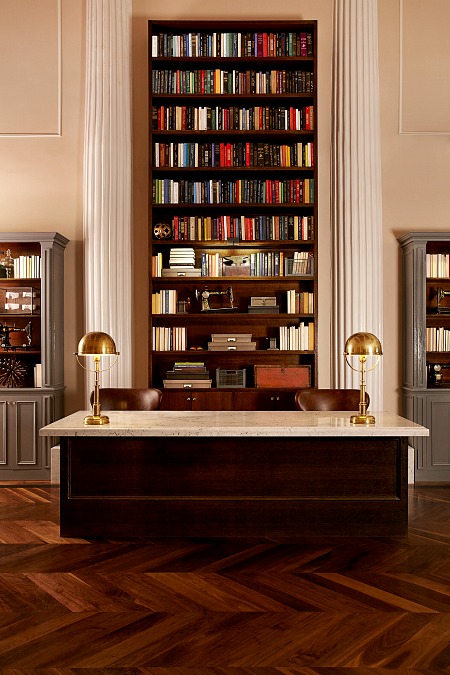 Check in at the Gregory

The hotel’s latest transformation was breathtakingly swift. The old elevators hadn’t been replaced when I visited, and I’m convinced I smelled fresh paint as I entered. But the design team at Bill Rooney Studio, veteran hotel design magicians, hit the sweet spot, creating a handsome lobby with masculine Edwardian overtones built for 21st-century multitasking (good-looking leather sofas, wing chairs and tabletops abound, ideal for a quick business meeting, a tete a tete or checking your messages).

In what has become de rigueur for Garment District hotels (see the Refinery, Hilton New York Garment District, Residence Inn New York Times Square), tools of the rag trade including carefully placed dress forms and vintage sewing machine parts bedeck the lobby in a salute to the neighborhood’s rapidly receding industry (and identity). As for the books lining the shelves, they’re the real deal, even if most of their spines face in (page-out books look better, as any interior designer will tell you).

Upstairs, the identically dressed rooms sport smart herringbone carpeting, white nightstands that evoke Billy Baldwin (or Betty Draper) and beds wrapped tightly in white sheeting like hospitality mummies and backed by tall black headboards. Cheers for the whimsical suite of framed artworks (a top hat, a deconstructed suit pattern, an eye chart) over a marble-topped table in a room I visited and the newly done bathrooms, lined in white subway tiles framed with dark grout lines. The surprise? Wall- and window-unit air conditioners which knock down the luxury quotient a notch.

Prices in the rooms I saw ranged from $149 to $498 and $189 to $559 as reported on the honor chart in the closets. Score the low end and consider yourself lucky. But the high end? Pretty pricey, even for history buffs.

Checking into “Hotel Life,” A New Book About The Places Where Anything... Still Regal: A Chic New Look For San Francisco’s Grand Old Palace Hot...
Scroll to top