On a recent visit to The Quin hotel I came across something I’d never seen. A button on the bedside phone – remember those? – connects you instantly with a personal shopper at Bergdorf-Goodman. Should you need a new nail color or a last-minute Alaia, they can send one over (the store is steps away). If you’re not sure what you want, you can check out the Bergdorf’s vitrine in the lobby, laden with eye-catching handbags, fragrances and shoes that look like sculpture.

Hotels work feverishly to differentiate themselves from their competitors, but nowhere is this trend more prevalent than among those courting luxury-minded guests. Strolling through the Quin I was reminded that amenities are like an arms race in the hotel world. The Quin doesn’t have an instantly recognizable story like the Plaza — or the Standard — but the hotel has worked hard to create an identity. And that embraces a slew of 21st –century amenities, including some, like room service from Bergdorf’s, you never imagined you wanted. 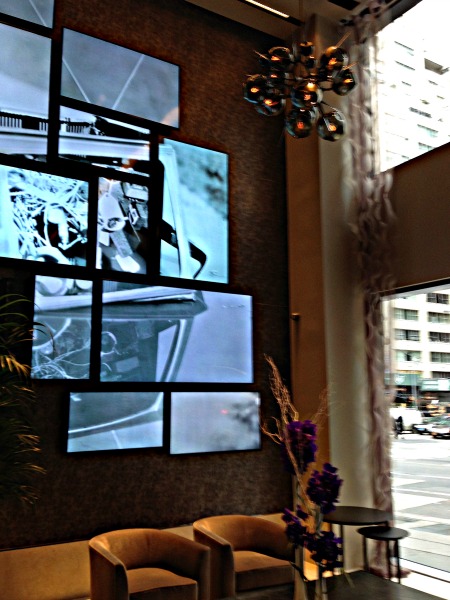 The digital art wall at the Quin

The Quin, short for quintessential, looks and feels new but in fact occupies a 1929 building that for 82 years housed the Buckingham Hotel – a humbler property that was no slouch. Perched on the corner of Sixth Avenue and 57th Street, the hotel promoted long-term stays and was a favorite with artists. Georgia O’Keeffe and Marc Chagall were regulars as was Ignacy Jan Paderewski, the celebrated pianist who also Poland’s first prime minister. The hotel was so popular with musicians — Carnegie Hall is down the street — that the lobby featured sculptures of musical instruments. But by the time the Buckingham checked out in 2011, the place was so rundown rooms started at $129, a price you won’t see any time soon.

The renovation took almost two years. Plenty of time, in other words, for designers Perkins-Eastman to construct a fully thought-out — perhaps over-thought-out — persona for a 208-room property.

The look is contemporary. Rooms sport beamed ceilings, a wink at the building’s Jazz Age origins, but the hotel feels airy and sleek. Delicate spiraling curtains that look like spun sugar frame the lobby’s new windows that stretch up two floors, updating the building  indoors and out. A white marble floor in the room housing the Attache – Quin-speak for the concierge in a partnership with Luxury Attache – feels modern and evokes a sumptuous vintage luxury hotel.

Flowers in the Quin lobby

The showpiece is the lobby’s gigantic digital art wall – 13 big screens – created by a different artist each month. This brings us to art, a leitmotif throughout the hotel. The focal point in the urbane guest-only sitting room behind the lobby is an enormous canvas by French street artist Blek le Rat. Art books are stacked in the guest rooms. And everywhere you look – from guest umbrellas and laundry bags to the website homepage – you see the hotel’s signature illustration, the coyly enigmatic face of Quin by Swedish artist Daniel Egneus.

In short, for a hotel with spare lines there’s lots to see. The show continued in the corner suite I saw. Dressed in neutral creams and taupe’s with splashes of wood it featured a compact sitting room with a sofa opposite the flatpanel TV, a long desk and a clever desk lamp that looked like two sleek metal rods. A king-size Duxiana bed dressed in white Sferra sheets commanded attention in the adjoining sleep room, big enough to hold a sky blue club chair.

While the bedroom and sitting room weren’t large, the bathroom felt huge. Clad in taupe stone tiles, it featured an enormous marble-lined soaking tub and a generous stall shower with a succulent set on a marble ledge. The toilet stood shielded behind a discreet glass door. And if that wasn’t enough, there’s a powder room as you enter the suite.

As I left I decided my favorite amenity was the all details that kept me entertained as I toured the hotel. The best? Hard to choose, but I’ll vote for the leather drawer pulls that evoke luggage handles. But the fanciful flowers in the lobby – big, dramatic and different each time I’ve visited the hotel – are a close second.

Name Your Poison – There’s Lots to Choose From at The American Museum of... And They Smell Great, Too – Le Parker Meridien’s Ultimate Gingerbread H...
Scroll to top