Back to the land isn’t a phrase that leaps to mind when I think of New York, especially anything having to do with Times Square.

So I was intrigued to learn that Element New York Times Square West, a skinny skyscraper looming over the Port Authority Bus Terminal with nary a barn nor pasture in sight, is about to begin offering guests the opportunity to have food delivered from Holton Farms, an eighth-generation family farm in Vermont. 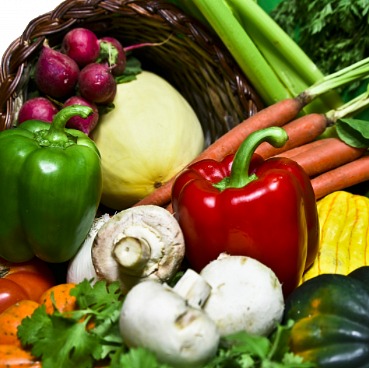 Element is an extended stay hotel with kitchenettes in every room. Many guests in town for business stay a week or longer and, tired of eating at restaurants, want to prepare something in their rooms, said Peter McNamee, General Manager. The hotel, which opened last November, already offers a range of packaged and frozen foods in the lobby grab-and-go shop, like Cedar Lane frozen Chili Relanos.

The decision was made earlier this year to partner with Holton to let guests order up food that’s not only fresh but locally grown on sustainable, organic farms, a move in tune with the chain’s green-is-good philosophy.  The hotel’s complimentary buffet breakfast and evening wine receptions will also feature food from Holton Farms.

As far as I know, Element is the first New York hotel to offer guests access to food from a Community Sponsored Agricultural group, or CSA, as such groups are known.

How does the program work? The farm sends the hotel a weekly list of what’s available,

from fruits and vegetables to breads, eggs, meats, coffee beans, even maple syrup (offerings change seasonally).  Guests can order food when they book their room or during their stay, handing their list to the concierge on Tuesday. Orders are delivered on Wednesday, and the charge is added to the guest’s bill.

Guests who choose to forego a slice of greasy pizza from Sbarro’s in the Port Authority and whip up an omlette made from organic eggs, Vermont Creamery goat cheese and organic chives in their rooms get a taste of history.

Holton has been a family farm in tiny Westminster, Vermont, about 200 miles from New York, since the 1750s. Three years ago, Seth Holton and Jurrien Swarts, cousins and co-owners of Holton Farms, decided to plant boutique crops – 100 varieties including 30 varieties of tomatoes, 20 strains of peppers and 7 types of eggplant — band together with small farms and food suppliers in Massachusetts, New York, New Jersey and Pennsylvania and turn Holton Farms into a CSA.

CSAs offer consumers a way to buy local, seasonal food directly from farmers without visiting a farmer’s market. Under the system, a farmer offers “shares” to the public, typically consisting of a box of vegetables or other farm products. Consumers purchase shares – also called memberships or subscriptions — and receive a box of fresh food each week during the farming season.

Holton Farms, for example, sells shares in increments of $250, $500 and $1,000 as well as an introductory rate of $50 for subscribers not at the hotel. Orders — the minimum is $25 — can be made any time during the season, which lasts from May 17 to October 21. The system gives farmers money up front for seed and supplies instead of waiting for sales to collect. According to Local Harvest, an organic food Web site, more than 4,000 farms throughout the country operate CSA programs.

“The idea was to make organics and unadulterated foods accessible for people as far away as New York,” says Swarts, who spent ten years in the financial world at Credit Suisse in New York before launching his venture back home in Vermont. Because there’s no middleman involved, prices can be cheaper than those of many organics, though gas and delivery is factored into the cost.

A dozen cage-free medium brown eggs typically costs $3.99, a pound of small organic vine-ripe tomatoes is $4.99 and a half pint of maple syrup is $8.75.

A Big Win for Rory McIlroy, Jumeirah Hotels — and New York’s Essex House — at the 2011 US Open
Fashion Week: New(ish) Designers Check in at the Hudson, W and Roger Smith Hotels
Is This The End? The Fabled, Troubled, Irreplaceable Hotel Chelsea Closes For Renovations
The Algonquin Gets Set to Close for Refurbishment in Early 2012
Ten Ideas to Steal From The 2013 Kips Bay Decorator Show House
The Quin – Short for Quintessential — Makes a Glamorous Manhattan Debut
2 replies

The Finish Line’s in Sight for the Grand Hyatt New York’s Big R... Five Great Decorating Ideas You Can Steal from the 2011 Kips Bay Decorator Show...
Scroll to top