It’s safe to say any number of New York City hotels would be thrilled to roll out the white carpet when Pope Francis breezes into town for a much anticipated 40-hour touch down.

But following a custom begun in 1979 with Pope John Paul, home base for the Argentinian pontiff on his first visit to New York will be a five-story townhouse on the Upper East Side. 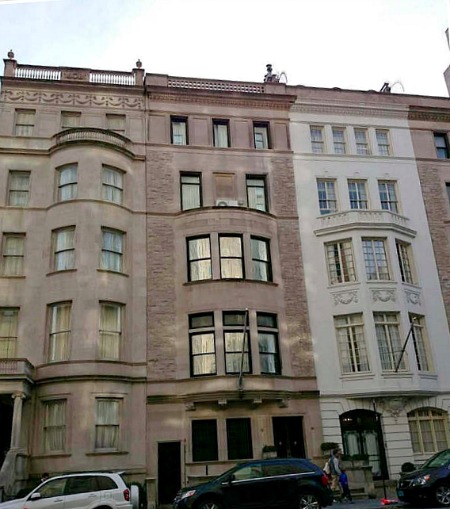 The Pope’s home away from Rome.

And not just any townhouse.  Since Francis is the first Jesuit priest to become pope, it’s worth noting that the elegant limestone mansion, steps from Central Park and the Ralph Lauren Store, has deep ties to the Jesuits, the order of Roman Catholic priests known for evangelical, educational and intellectual pursuits in more than 100 countries as well as vows of poverty, chastity and obedience.

Completed in 1894, the 11,000 square foot Neo-Renaissance-style house was snapped up in 1904 by Hugh J. Grant, a Tammany Democrat (and devout Catholic) who was New York’s youngest mayor, and his wife Julia Murphy Grant, daughter of a U.S. Senator from New York. Following the deaths of both her father and husband in 1910, Julia Grant looked to her faith.  She contracted Maginnis & Walsh, architects of the main altar at St. Patrick’s Cathedral, to design a private chapel for her house. She also heeded the council of her pastor David Hearn, S.J., a prominent Jesuit priest, and put up money anonymously to start Regis High School, an elite, tuition-free Jesuit school for boys several blocks from her home.

Grant died in 1944, but the house remained in the family until 1975, when her son, Hugh Grant, Jr., donated it to the Archdiocese of New York. It eventually became the official residence of the apostolic nuncio and Permanent Observer Mission of the Holy See to the United Nations, and in 2010, ownership passed to the Vatican.

We don’t know what the interior looks like at the moment, but in a video released by Regis High School this week, Regis archivist Anthony Andreassi, C.O. observes that visitors in the 1950s described the house as “monastic, almost convent-like.”

It’s hard to think of a single New York City hotel fit for world leaders that could be described in those terms. For a pope who has requested his room be stocked only with water and bananas, it sounds like he’s staying at the right place.

So Long, Waldorf: Why The New York Palace Is the President’s New NYC Home... New Paintings by Artist Sonya Sklaroff Transform Sofitel New York Into An Art...
Scroll to top