I thought about this when I walked by the Franklin Hotel, an Upper East Side boutique, on a recent spring day. I hadn’t been by the hotel in a while and was astounded by what I saw. A futuristic 19-story glass-front apartment building was going up next door and at first glance I thought it had gobbled up the hotel. 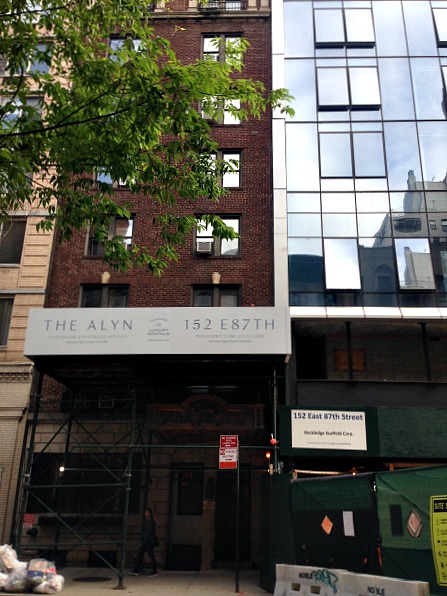 The red brick Franklin (mislabeled) on the left, the new glass-box Alyn on the right

The new building’s lower floors were completely shrouded in painted green construction site wood, and the sidewalk was closed. As I got closer I saw the Franklin was simply hiding under an enormous construction apron that stretched across the front — and touted the new apartment tower. It obliterated the hotel’s most distinctive feature, a neon sign that dated from the Franklin’s 1931 origins. It was as if the hotel had ceased to exist.

But the Franklin was open for business.  “It’s been there for a while,” said the woman at the front desk when I asked about the site next door. “It’s not so bad.”

Fine, but if I was going to stay here, I’d want to know about it and the corrugated metal canopy that dims the compact sitting room’s natural light.

None of this was mentioned on the hotel website. It’s not reflected in prices, either. Rooms for the coming weekend were priced at $339 for a queen and $379 for a studio. The Franklin is known for stylish but extremely snug rooms. That’s a high price for a building that’s literally under wraps. 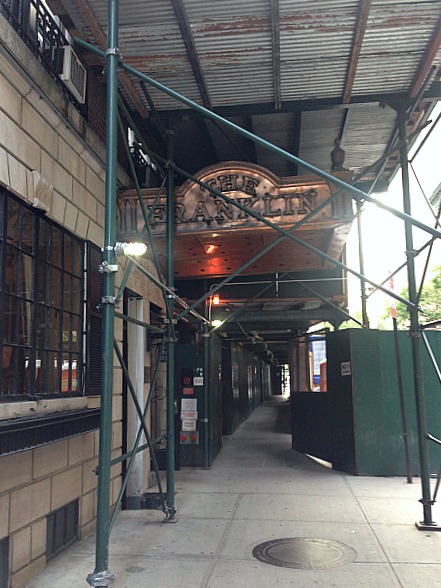 Construction apron over the hotel entrance — and the vintage Franklin sign, unlit and in hiding

Next I consulted TripAdvisor and immediately found recent comments about the construction. “Very noisy construction next door,” wrote a disgruntled Juan G, who had stayed at the Franklin twice in the past. “Construction everywhere around the hotel and the space is tiny!” opined Thomas N, a level 3 contributor. I also saw photos of the obfuscated entrance.

Moral to the story? Construction is a fact of life in New York City, but there are rules. On weekdays, it’s allowed between 7 a.m. and 6 p.m.; it’s banned on weekends except in case of an emergency. Equipment is supposed to be outfitted with noise-reducing mufflers, according to the official New York City Noise Code Guide, but mufflers can only do so much.

If that’s good enough for you, proceed as normal when you reserve a room. But if noise bothers you, call the hotel directly (not the reservations line) before you book, and ask if any construction is planned or in progress nearby. And check out TripAdvisor. You can be sure the situation won’t go unnoticed by its boots-in-the-ground reviewers.

More Light (for now) at Le Parker Meridien, or What Happens When They Knock Down the Building Next Door
Lose That Zapper: Hotel Room Channel Surfing on a Mobile Device Is Here
2 replies

“American Gothic” Made Him Famous, But Grant Wood Also Created Art... Four Hotel Rooftops Where You Can Still Find a Spot to Watch the Macy’s...
Scroll to top