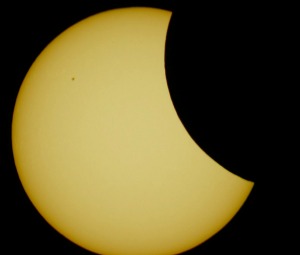 It’s Eclipse Day 2017. Here in New York, we’ve been promised a 75 percent partial that will start at 1:23 p.m., hit its stride at 2:44 p.m. and wrap at 4 p.m., according to authorities at the American Museum of Natural History. We won’t get a total eclipse, but the moon covering three quarters of the sun qualifies as a big deal.

These hotels with roof bars, pools and sky rooms are so stoked they’re throwing eclipse parties. Drop by and watch the big show in the sky with a crowd.

Haven Rooftop at the Sanctuary This Midtown West hotel isn’t tall but boasts a hopping open-air roof bar with great sky views. The $20 admission gets you a cocktail and solar eclipse sunglasses. Come sip the drink of the day, the Eclipse Negroni made with cinnamon infused gin, Aperol, Campari and anise. 132 West 47th Street, 212 234-7000

Hotel Americano Instead of a roof bar this chic Chelsea hotel has a pool where you can down a Grey Goose Martini, or two, and catch the sky show. Free admission, solar sunglasses provided, but you need to book: rsvp@hotel-americano. For $40 you can order a pool-side chair and watch in style. 518 West 27th Street, 212 216-0000

Salvation Taco at Pod 39  Seating may be scarce, but Salvation Taco’s roof bar atop Midtown East’s Pod 39 offers the double pleasure of seeing the eclipse and the Empire State Building without a cover charge. Byo solar glasses. 145 East 39th Street, 212 865-5800

1 Brooklyn Bridge See the sky show with bonus views of the Manhattan skyline and the Brooklyn Bridge from the roof bar at this hip new Brooklyn hotel in DUMBO. Fora $35 you get a Frozen Eclipse Cocktail, lobster roll and solar eclipse sunglasses. 60 Furman Street, Brooklyn, 347 696 2500