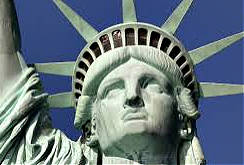 There’s nothing shy about the Statue of Liberty, standing proud and tall on her very own island. It’s just that in a city of skyscrapers she’s not exactly the tallest act in town. But starting on October 28 you’ll be able to see more of her — and more of the view from her island — than in years when Lady Liberty’s crown reopens after a year of renovations. Or to quote pageant coach Victor Melling in Miss Congeniality, “‘You ‘are’ the crown!”

The crown will be open each week from Thursday through Sunday. You can take a ferry from Battery Park in lower Manhattan or Liberty State Park in New Jersey. Ferries run daily from 9:30 a.m. to 3:30 p.m.

Our favorite way to see Ms. Liberty is from a hotel, of course, even if we’re not as close as, say, Robert Cummings in Saboteur.

Check into one of these hotels for Liberty viewing all day 24/7, weather permitting.

Situated at the southern tip of Manhattan, the Ritz Carlton New York Battery Park is about as close as you can get to La Liberty and still be on dry land. Half of the rooms look onto New York harbor – and the statue. Liberty views come at a premium – surprise, surprise. But when we checked in on a slow Saturday night our standard room was upgraded to a room with a view.  (With easy proximity to Wall Street, weekends at the hotel are off peak.) Our view was the real deal and, though hardly a close up, postcard perfect. For best results bring binoculars –or book a suite (water view rooms come with telescopes).

The Marriott New York Downtown stands 38 stories tall near the tip of Manhattan. That means a portion of the 490 rooms enjoy views of New York harbor – and Liberty Island. Though views cost extra, they’re available in standard rooms, not just suites. Weekends are a great time to book (the hotel website shows last-minute prices, which can go as low as $199).  And when you tire of the statue, which, let’s face it, is pretty static, the 16 HDTV screens in 85 West, the hotel’s sports bar and grill, provide plenty of animation.

So much local history surrounds the Millenium Hilton the Statue of Liberty views seem almost secondary. The 569-room hotel stands next to Ground Zero and the National 9/11 Memorial and overlooks the 18th-century building and grounds of Trinity Church. (It’s also steps from Wall Street.) And at 55 stories the hotel’s upper reaches command Liberty views in deluxe rooms and suites (but not in standard rooms, alas).  Bonus: the hotel features a sprawling fitness center and a heated indoor pool surrounded by glass.

You can see the outline of Lady Liberty from a handful of corner suites (the priciest, natch) in the new all-suite Conrad New York situated in the upper reached of the Battery. Typical of new(ish) hotels  — the hotel was built in 2000 as an Embassy Suites and reopened post renovation this year – windows are big, and Hudson River views are unimpeded. You’ll need binocs – or a strong camera lens – to see much of the statue, but it’s viewable. Better still, check it out from Loopy Doopy, the hotel’s room bar, open from May to October.

NYC Hotels to Check Out – or Into – for The Fourth of July
A First Look At Conrad New York, A Stylish All Suite Hotel
The Conrad’s Loopy Doopy Roof Bar Opens for the 2013 Season
Are These The Best Hotels in New York in 2012? AAA Thinks So and Rolls Out Its Five Diamond List
Still Shopping? Check Out Overnight New York’s Second Annual Last-Minute Hotel Holiday Gift Guide
Hunting Down the Greenest Hotels in New York City
14 replies