Here’s a brand new perspective on the Standard High Line. The vantage point is a roof deck at the Whitney Museum of American Art, opening May 1.

The museum, a magnificent eight-story creation from architect Renzo Piano, boasts three terraces looking directly onto the Standard (and into its infamous windows). The roof of Hotel Gansevoort Meatpacking District is also visible in a supporting role. 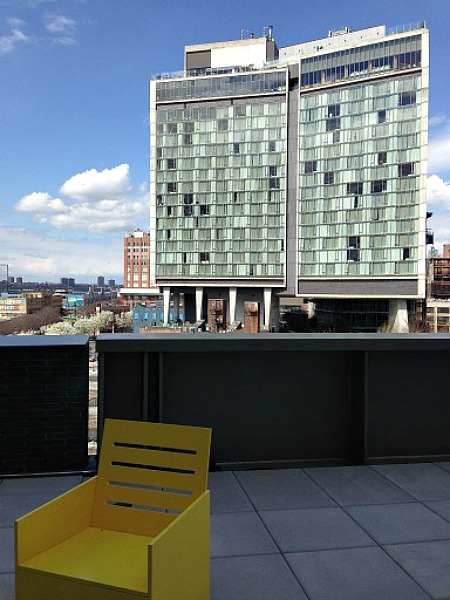 A roof with a view

And the canary deck chair in the foreground?

From a deck chair you can pan your gaze over to the eastern skyline encompassing Meatpacking District rooftops and the Empire State Building, which celebrates the Whitney (and its own 84th birthday) with a one-time-only light show on May 1 interpreting artworks by Georgia O’Keeffe, Edward Hopper, Andy Warhol, Peter Halley and Barbara Kruger, among others, from 8 p.m. to 2 a.m. It’s almost summer. Let the rooftop entertainments begin.

Still Shopping? Check Out Overnight New York’s Second Annual Last-Minute Hotel Holiday Gift Guide
The Cheeriest Holiday Decorations at New York City Hotels, 2018 Edition
NYC Hotels to Check Out – or Into – for The Fourth of July
Stayful, a Deal-Savvy Website for Bidding on Boutique Hotel Rooms, Checks In
Eight New York Hotels That Know How to Dress for the Holidays
0 replies

Eco-Friendly in New York: Which Hotels are Greenest? Now You Can Use Your Apple Watch to Check Into a Marriott Hotel
Scroll to top