We’ll venture a wild guess that architect Arthur Loomis Harmon never dreamed the roof of Allerton House, a residential hotel for men he designed in 1916, would one day serve up Mexican beer, California Cabernet and cocktails like Fly By Night (gin, lemon juice, cinnamon-vanilla bean, orange blossom and sea salt on the rocks). 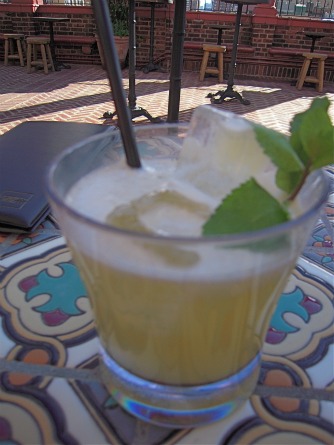 The Melon at the roof bar

He probably didn’t foresee $70 cocktails to share either, like The Melon – vodka, gin, tequila or rum mixed with watermelon puree, lime juice, agave and mint and served in a baby watermelon.

But the roofless sundeck that looks like a Romanesque ruin with brick walls and arched openings embellished with classic columns is the perfect setting for a 21st century roof bar. It even has postcard views of the Empire State Building, which Harmon — and his firm Shreve, Lamb and Harmon — designed 15 years later.

Envisioning a roof bar in that setting was no stretch for Vanessa Guilford, in-house design director for BD Hotels and designer of the building’s new occupant the Pod 39 Hotel, a sibling to The Pod Hotel that opened this summer. The Pod’s downstairs restaurant and bar are still under construction. But the owners shrewdly unveiled their rooftop gem in time to attract a following before the cold weather sets in.

Though less crippling than a blizzard, it was windy when we ventured to the roof on a late Sunday afternoon. But in anything but a downpour the Pod’s 18th story roof is wildly atmospheric. Cocktail tables topped with colorful ceramic tiles ring the perimeter. Party lights are festooned from wall to wall. And the views through those arches add an unexpected medieval accent to a space that’s simultaneously historic and ultra-contemporary. 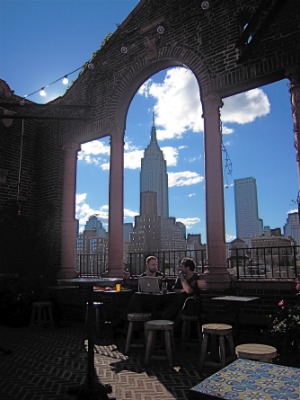 We ordered The Traveler, a peppery concoction of vodka, pineapple juice, sangrita verde and lime juice on the rocks in a thick plastic old-fashioned glass ($10). And we watched the sun work its way behind a thicket of midtown buildings. It was a late afternoon crowd, more mellow than rowdy, more local than from out of town.

You exit through an interior lounge with big arched windows and aqua banquettes be-pillowed in bright colors. Then you’re whisked to the ground in a glass walled elevator that showcases the contraption’s mechanics. Amusing.

A First Look at Style On the Cheap at The New Pod Hotel
Up Close and Personal with the Empire State Building at the Refinery Hotel Roof Bar
A Chat With Vanessa Guilford About Designing Pod51 and Pod39, the Hip Budget Hotels
Pod 39 Throws Open its Doors with an $85-a-Room “Sample Sale”
The Best of the New at NYC Hotels, 2012 Edition
Cocktails With King Kong: Five NYC Hotel Roof Bars With Killer Views of the Empire State Building
13 replies