Though it no longer looks like an alien creature plopped in the middle of Times Square, the 33-year-old hotel is impossible to miss. A brutish fortress of glass and concrete, it looms 48 stories over Broadway, stretches the length of a city block and showcases an eight-story digital billboard ablaze with some of the priciest ads in town. 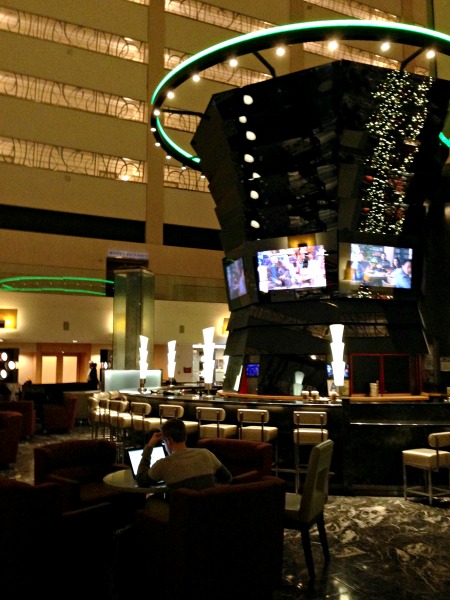 One of the Marriott Marquis lobby bars

Blunt exteriors aren’t what earned Portman a lengthy obit in The New York Times, of course. The hotel doesn’t reveal its legendary attributes until you step inside, a feat that requires finding the entrance (it’s tucked away in a pass-through between 45th and 46th Streets), dodging taxis and Ubers dropping off guests and whirling through a massive revolving door that deposits you in a honeyed wood and marble anteroom showcasing the Portman trademark: a circular bank of elevators, helpfully labeled A through P, that form the building’s centerpiece.

With floor-to-ceiling glass and no corners, the elevator cabins look like gigantic time release capsules. Step inside, and whoosh! Up you zoom past a blur of blackness and meeting rooms. The eighth floor lobby whizzes past with its sprawling restaurants, bars and a massive check-in counter Jet Blue would envy, gone in a blink. Swoosh! The guest rooms begin, floor upon identical floor of rooms that overlook the city and open onto hallways facing the enormous interior, big enough to house the Statue of Liberty, as a writer recently observed. Boom! The trip ends on the 48th floor, home of The View, the Marriott Marquis’ restaurant and bar that rotates slowly, completing a full revolution every hour.

To infinity and beyond: the Marriott Marquis glass elevators

My ears popped around the time we passed the window-lined fitness room overlooking the atrium. “I feel sick,” a millennial in a sweater-hoody and jeans murmured to her friend. I’m not sure that’s what Portman meant when he famously observed, “Everyone talks in a glass elevator. You get on a closed-in elevator, everyone looks at their shoes.” Still, both were right. It’s a dizzying, dazzling ascent.

Atrium hotels today can seem as dated as disco balls. Yet the form is alive and thriving as evidenced by the two-year-old Beekman Hotel, lower Manhattan’s glamorous Neo-Victorian tower distinguished by an imposing atrium replete with painted tin ceilings and filigree guard rails. What makes the Portman versions so evocative of Reagan-era emblems like McMansions and padded shoulders is their utter bigness. New hotels still reside in skyscrapers, but recent New York additions tend to top out at 200 rooms, like the Four Seasons Downtown, which shares an 84-story tower with luxury condos. That’s a far cry from the 1,892-room Marriott Marquis, which claims almost the entire building. 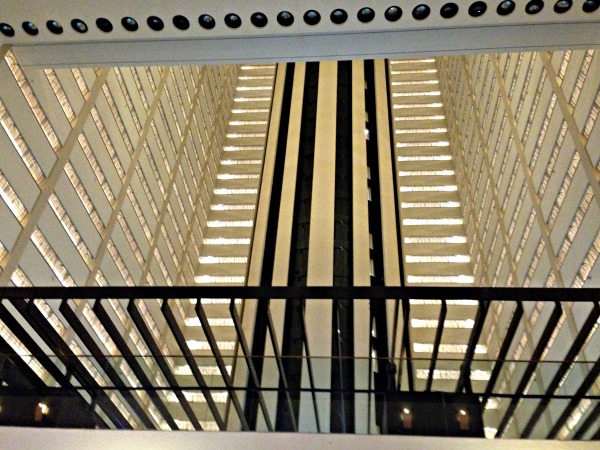 Looking up at the elevator and floors of guest rooms

1985 was a very different time, of course, particularly for Times Square. Like many Portman projects, the Marriott was part of a urban redevelopment push, in this instance to upgrade a notoriously seedy area (see “The Deuce”). Conceived in 1973 with Westin at the helm, the project was shelved in 1976 by the city’s financial crisis, restarted with Marriott in charge during the Koch administration and halted once again, this time by protests over the planned demolition of five historic theaters.

The 80s were in full swing by the time the Supreme Court stepped in. As part of the resulting compromise, the hotel’s third floor became a 1,600-seat theater, The Marquis. It proved an instant hit, just like its opening show, a wildly successful revival of the 1937 British musical “Me and My Girl.” Some credit The Marquis with jumpstarting Times Square’s transformation. 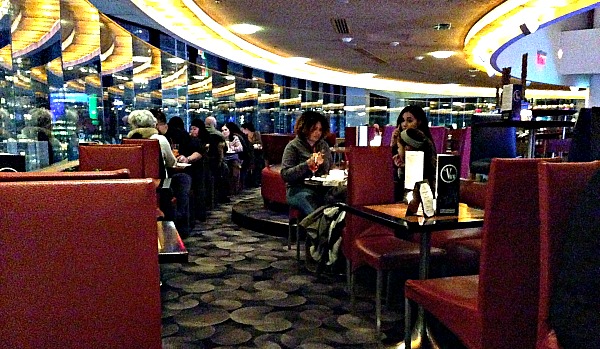 You can also credit the Marriott Marquis and its flashy, big-footprint counterparts with the rise of their polar opposite, the boutique hotel. Still, as I stood in the lobby, leaning back to gaze up at the stalk of glass elevators rising to infinity and beyond, it was easy to see what Portman was up to and why his hotels became instant icons.

As an architect and real estate developer, Portman was convinced that buildings that dropped your jaw and quickened your pulse could lure people back to deteriorating urban centers like Atlanta, Detroit and, yes, Times Square. “Anyone can build a building and put rooms in it,” he told the Times in 2011. “But we should put human beings at the head of our thought process.”

Humanization doesn’t leap to mind when I’m confronted by futuristic elevators in big brute buildings, but Portman knew how to wow an audience. I wasn’t the only one gazing up from the lobby. 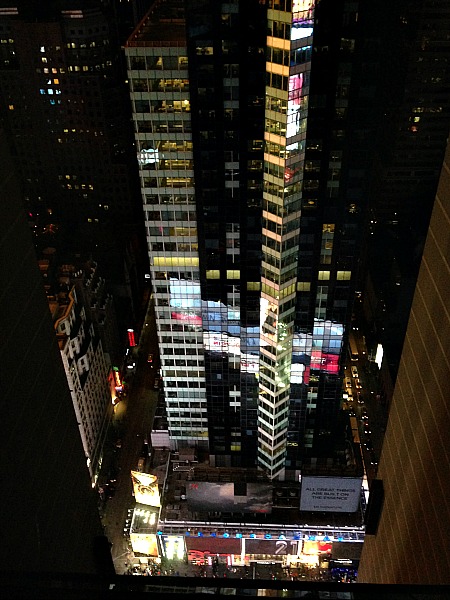 A view from The View

I decided to close my visit with a drink at New York’s only revolving rooftop restaurant, as it bills itself. Like the hotel, there’s nothing cozy about The View, whose circular, window-lined room could be transplanted effortlessly to Las Vegas. But only one city in the world could put on this particular show. From my window-side table, I watched a procession of twinkling lights, iconic rooftops and direct views into well-lighted offices and hotel rooms.

Though rotation is glacial, I could feel it and was happy to be sipping a Manhattan instead of tucking into the four-course fixed-price dinner — and not just because it costs $89. Like the Marriott’s eye-popping atrium, The View touches something primal. It’s impossible to look out the window and not say, Wow! I’m not sure when I’ll go back, but I like knowing that it’s there.

The Algonquin Gets Set to Close for Refurbishment in Early 2012
Special Globe, A New Website That Focuses On Traveling With Special Needs Children
Hotel Bars Where You Can Cheer the Super Bowl (and the Giants)
The Best Hotels for Viewing Macy's Thanksgiving Day Parade, 2011 Edition
Checking Out Times Square from the R Lounge at the Renaissance
Matilda Meets the Marriott: The Algonquin Gets a New Partner
2 replies

Eat Up! These NYC Hotel Restaurants Offer Deals on Meals During Winter Restaurant... NYC Hotels Where You Can Watch the 2018 Winter Olympics
Scroll to top