At a glance: What makes a 1929 hotel appealing in 2013? Good bones, a great location and contemporary plumbing come to mind. But the game changer is a recent top-to-toe renovation.

The Stewart Hotel, which started life as the Governor Clinton and stands across the street from Penn Station and Madison Square Garden, nails all of the above. Three years ago, when I first reviewed this classic train station hotel, the place was called the Affinia Manhattan and looked weary and worn. But 2011 brought a smart new look to all 600-plus rooms – and their bathrooms – by the style-centric Rockwell Design Group. And in June 2013, the final phase of the makeover wrapped with fresh conference rooms, a splashy new marquee and an eye-catching black-and-white lobby that manages to feel contemporary, historic and futuristic at once. (They tweaked the name to Manhattan NYC — an Affinia Hotel, but never mind.)

Rottet Studio, designers of The Surrey, wisely kept the big lobby’s original floor and ceiling and changed everything else, imbedding references to the hotel’s namesake Manhattan. The eye-catching chandelier replicates the topography of the Manhattan skyline. Seating areas abound – soft, dark wing chairs and squared sofas adorned with nail heads. But the centerpiece is the show stopper — deep green velvet sofas set in a stepped white sculpture that made me think of ziggurats, The Jetsons and soft ice cream. Look closely and you’ll notice it’s the shape of Manhattan.

That sculpture is no doubt murder to dust. For now it looks terrific, and the Stewart easily qualifies as Madison Square Garden’s chicest property (a low bar, I admit, but a showpiece hotel is just what this area needs). Better still, prices are still moderate (for the most part), another reason to cheer.

Rooms: I’m not wild about one-size-fits all room decor, but Rockwell gets it right; the new rooms are smart, stylish, serene and, best of all, hit a sweet spot — they’re contemporary and respectful of the hotel’s historic bones.

I saw a standard room dressed crisply in gray and white. Though extremely small, the little room was spotless. The compact sleeping area stood at the end of a long narrow white hallway with a deep closet on one side and a tiny bathroom opposite. Everything in the bathroom was new — tiles, toilet and tub/shower combo (the see-through vinyl curtain made the teeny room seem bigger). Best detail: the stylish white rectangular sink perched on a chrome wash stand.

An accent wall papered in a whimsical gray-and-white floral backed the white full-size bed, livened by a chartreuse throw and a coral-dotted throw pillow. The white leather club chair opposite it doubled as a desk thanks to twin wood disks perched above the arms. A coffee maker stood atop the low white refrigerator, and a generous flatpanel TV swung out from the wall. Less welcome detail: a window air conditioner that cooled the room but hummed and blocked some light.

While standard rooms are small, suites can be gigantic and are ideal for families — or dog owners in town for the Westminster Dog Show at Madison Square Garden every February (the hotel is extremely pet friendly and creates a special do run at show time). Many of the suites come with kitchens kitted out with new appliances.

Food and drink: In another part of town, Niles, the restaurant and bar that connects to the hotel, would seem an ordinary, albeit attractive, American-style bistro with a large sports bar. But given its location across the street from Madison Square Garden and Penn Station, a style-free zone stuck stylistically and gastronomically in the Eighties, it’s a moderately priced gem.

The front room, near the bar, has windows facing the street and tall glass-topped tables, lighted underneath.

The bar makes a grand centerpiece, ringed with tall, faux lizard stools and flatpanel TVs. And the enormous dining room in the back – sleek and contemporary with white walls and white tablecloths – sports ambient color-changing lights that veer from blue to lavender to hot pink. We lunched on the grilled vegetable pressini ($12), a good, serviceable sandwich that came with a generous mesclun salad, vinaigrette dressing on the side. The iced tea ($3), way too strong when it arrived, was just about drinkable by the time we left.

Too fancy? Dunkin’ Donuts is next to the hotel, and Starbucks is across the street.

Amenities: There’s a spacious, well-equipped gym on the second floor. Pets are welcome; a $25 fee covers the entire stay (the hotel is a smart choice for dog owners in town for the annual Westminster Dog Show at Madison Square Garden). WiFi ($14.95 for 24 hours). Aveda bath products. Complimentary wine daily at 5 p.m.

Surroundings: As good as it gets if you want to be near Madison Square Garden, Pennsylvania Station (home to Amtrak trains and the Long Island Railroad), the Empire State Building or Macy’s. The Broadway Theater District — and all Times Square has to offer — is an easy walk uptown, as are the New York Public Library, Grand Central Terminal and Fifth Avenue shopping (Saks Fifth Avenue, Bergdorf Goodman, Prada). Rockefeller Center, Central Park, the Museum of Modern Art, Time Warner Center and Lincoln Center are slightly further afield but easy to reach by subway and bus. And subway stations and bus stops are almost on your doorstep.

Back story: They built them big in the 1920s, and this brick behemoth with two entrances eats up a chunk of the block. Opened in 1929, it was designed by the architects Murgatroyd and Odgen, who worked in New York and Chicago, in the Italianesque style, with Romanesque windows and limestone carvings. Called the Governor Clinton, it wasn’t named for Bill of Arkansas (obviously), but the jury is out on whether it honored George Clinton (1739-1812), New York’s first governor, or a (somewhat) later governor, DeWitt Clinton (1769-1828). A classic train-station hotel – there was an underground passageway to the original Pennsylvania Station – the hotel lost its luster over the years and morphed into the Penn Gardens in 1967 and Southgate Towers in 1974. Affinia, part of the Denihan Hospitality Group, took over in 2004, and things are looking up. As mentioned above, deep-dish room renovations completed in 2011 included new bathrooms and fresh décor by uber-designers Rockwell Design Group. A complete renovation of the lobby and conference rooms wrapped in June of 2013, designed by Rottet Studio, which also did the Surrey, a luxury East Side property run by the Denihan. In 2015 the hotel tweaked its name, jettisoning Affinia Manhattan for the mouthful Manhattan NYC — an Affinia Hotel. But not for long. In 2016 Denihan sold the hotel and it is now the Stewart. 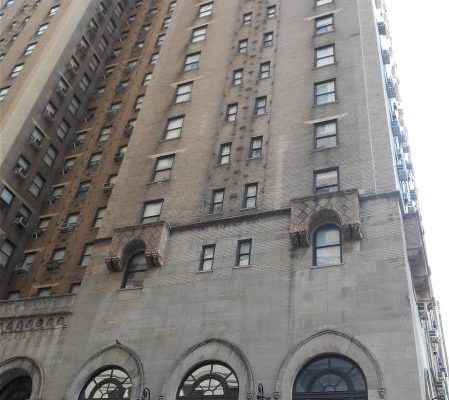 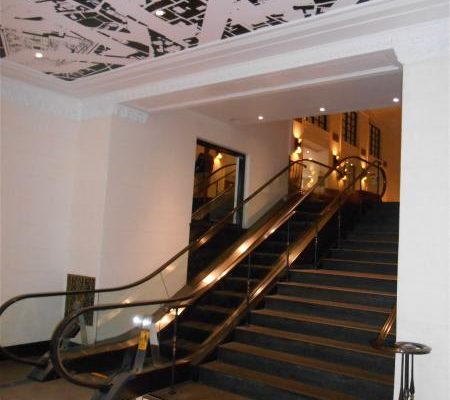 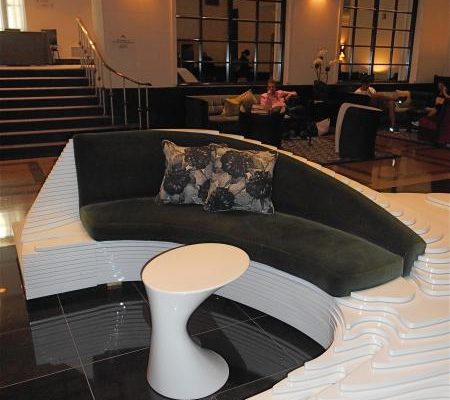 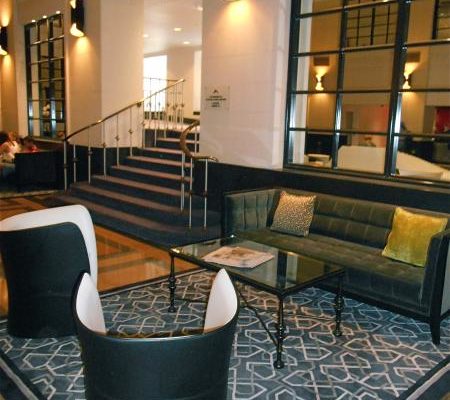 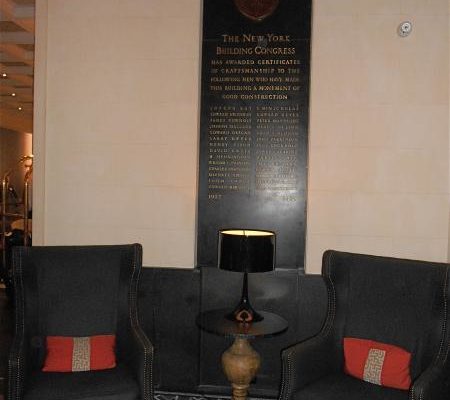 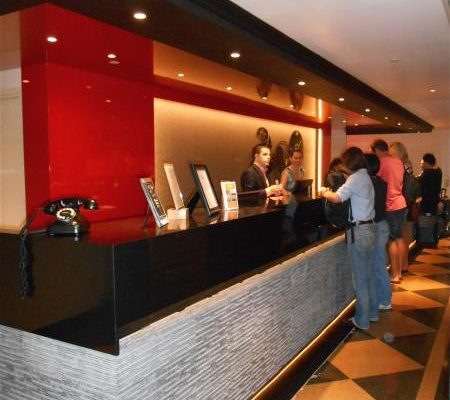 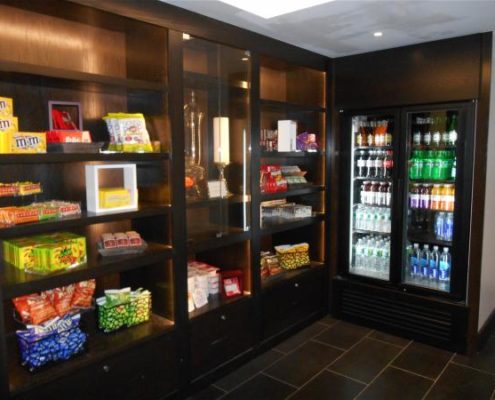 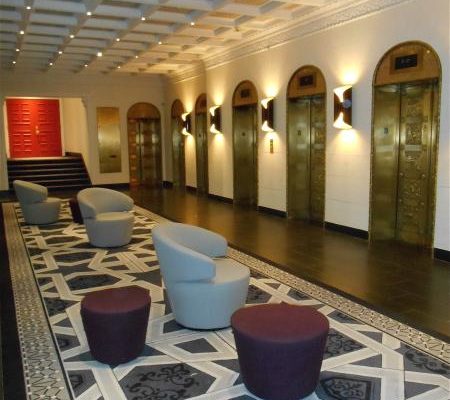 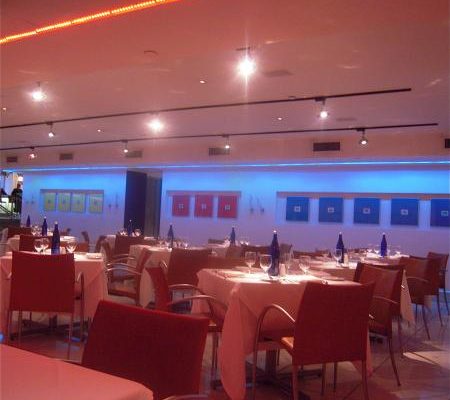 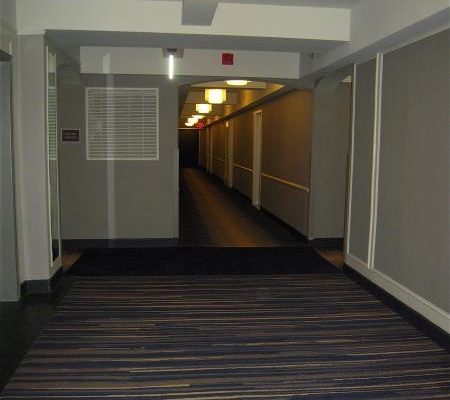 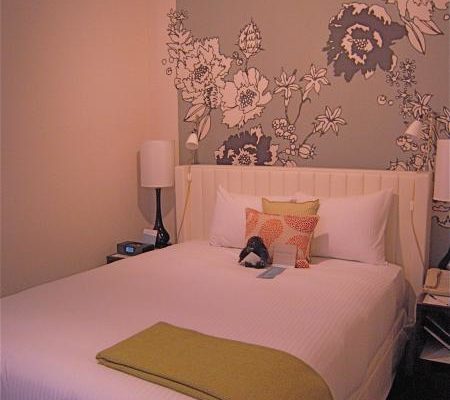 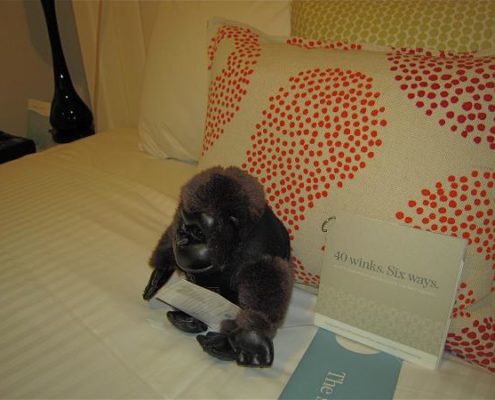 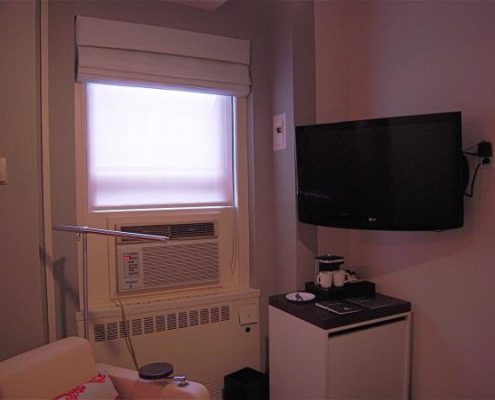 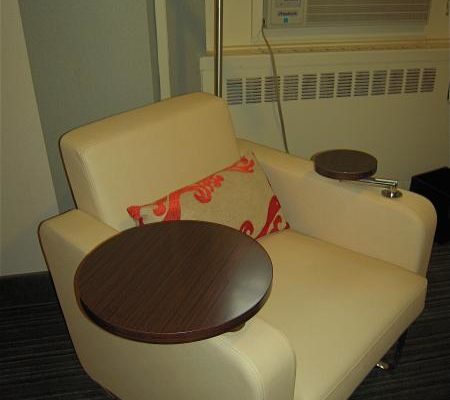 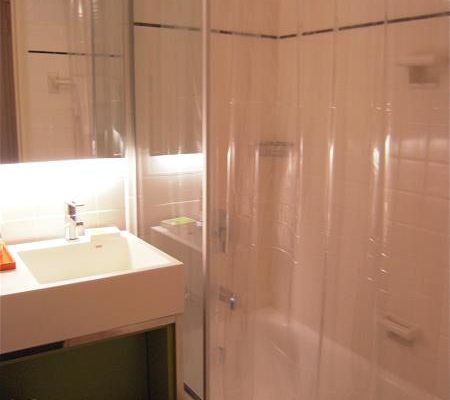