If you’ve ever stopped by the art-filled Surrey Hotel on the Upper East Side, you’ve probably noticed Graffiti Armoire, a curvy legged, scrawl-covered antique chest that stands near a commanding Chuck Close tapestry portrait of Kate Moss.

The sassy black and white cabinet was created by the Swedish-born design team of Jimmie Karlsson and Martin Nihlmann, aka Jimmie Martin, and is usually closed. But for now, a door is flung open, revealing a slick chili pepper red interior and a glass shelf holding a distinctly uncherubic silver cherub checking his flip phone. Dubbed Cardinal NYC, he sports a cigarette, a red skullcap, a cross dangling from a heavy chain and wings. 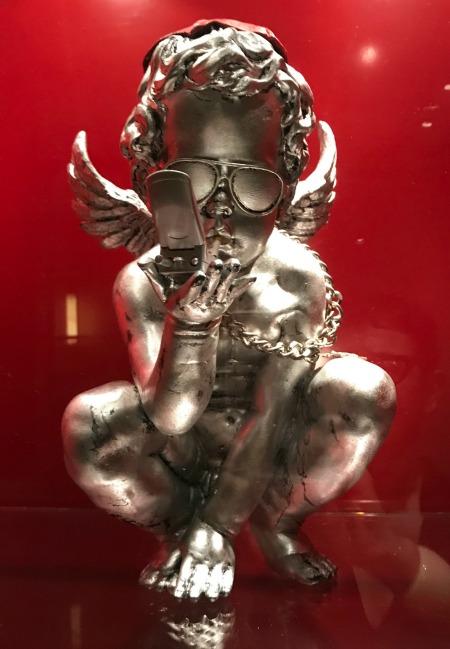 He’s a “Naughty Angel,” one of Jimmie Martin’s 21st-century sculptural riffs on classical putti scattered throughout the hotel through September — and maybe beyond — to amuse, entertain and rack up Instagrams. (Unlike Graffiti Armoire, they’re also for sale, priced from around $2,000.)

No two are exactly alike. Huddled over a copy of Vogue, Anna NYC flaunts dark glasses and a bob. And Naughty Karl? White hair, a black suit and, ahem, a bad habit outlined in white-powdered, interlocking Chanel Cs. 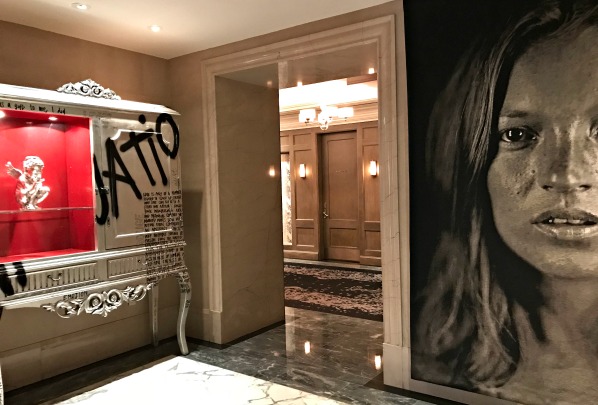 The Surrey’s cheeky cherubs are a reminder that art — permanent, pop-up or both — is in the air, and on the walls, at hotels all over town including Standard High Line, Sofitel New York, The Carlyle, The Pierre, The Quin, The Whitby and its downtown sibling The Crosby Street Hotel. They’re great places to stop by when you’re in the mood to drink in some art while you’re having a real drink, meeting friends, checking your messages or spending the night.

Among the city’s art-filled hotels, the Surrey is special, with art-world ties that run deep thanks to its location and a long-gone tenant. For much of the second half of the 20th century, the art scene clustered around upper Madison Avenue, drawn by the area’s numerous art galleries as well as the Metropolitan Museum, the Whitney Museum and Sotheby Park Bernet, forerunner of Sotheby’s. From 1971 until it closed in 1992, Les Pleiades, the Surrey’s old world French restaurant, flourished as the art world’s unofficial canteen.

Lunch reeled in a constellation of dealers, artists, curators, collectors, auctioneers and museum directors like Tom Armstrong of the Whitney and Philippe de Montebello of the Met who could be found doing deals, exchanging gossip and air kissing over vichyssoise and grilled snapper while seated in red leather banquettes. 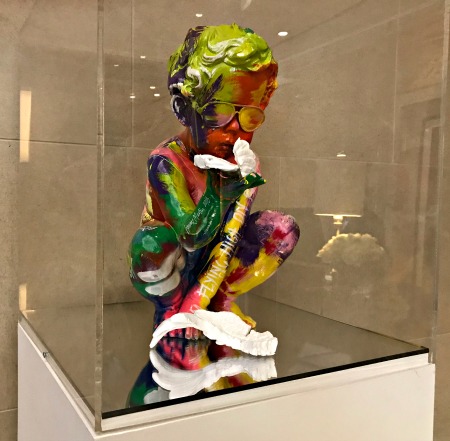 Les Pleiades was long gone by the time a faded Surrey closed for renovation, reopening in 2009 as the stylish hotel you see today. In name, at least, Bar Pleiades, the hotel’s atmospheric cocktail lounge, winks at the Surrey’s art world DNA. But so does the eye-catching collection of contemporary art integrated into the hotel’s design by Rottet Studio. Among the original pieces on view are Claes Oldenburg’s Pop-inflected painting of sneaker laces, notebook drawings by Richard Serra, prints of xenon projections by Jennie Holzer and Jimmie Martin’s Graffiti Armoire. 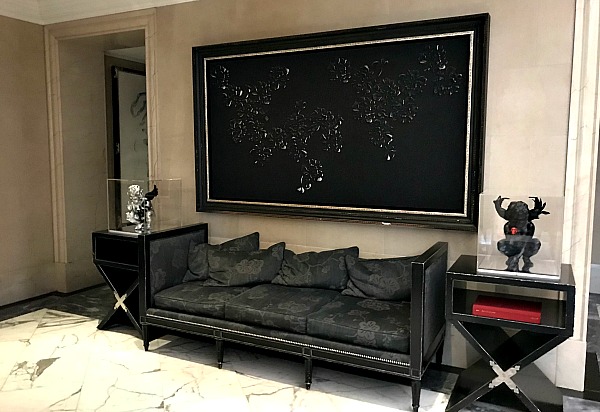 Angels in the Surrey lobby

Rebuilt from the ground up and embellished with paint and wit, the Surrey armoire exemplifies what Jimmie Martin has been known for since Karlsson and Nihlmann officially became designers in 2004. They got their start fashioning quirky hand-painted furniture for their shared home. As the story goes, a sharp-eyed neighbor spotted their creations when they moved out and ordered up a piece. Word spread.

Working out of a Kensington studio, Jimmie Martin commands a small empire of playfully decadent antique chairs, chests and chaises, no two alike, supplemented by rugs, pillows, wall coverings, lamps and, of course, sculptures. Pop and rock aristocracy like Madonna, Liam Gallagher and The Who’s Peter Townsend are among their clients.

“We like the idea of taking something old and making it new,” Nihlmann has said.

Renaissance Murals on the Ceiling: The Sherry-Netherland Lobby Gets a New Old Look
Hearts and Graffiti: Checking Out Nick Weber's Rakish Valentine Art At The Quin
White Flowers, a Dux Bed and Kate Moss: A Memorable Night at The Surrey
Mermaids, Mythology and Magic: the Roger Smith Hotel's Haunting New Murals
Michelin and Zagat’s Serve Up Their Best NYC Hotel Restaurants for 2012
What's on View Across from Check-in? How the Quin Hotel Turned The Lobby Into an Art Gallery
0 replies

Ace it! New York’s Best Hotels If You’re Going to the U.S. Open Will a Hotel Stand Next to New York’s Historic Merchant’s House...
Scroll to top