Everyone knows artist Grant Wood (1891-1942) for his iconic depiction of a deadpan Iowa farmer, pitchfork in hand, standing beside a stern, yellow-haired woman wearing an apron. But did you know that in 1932, just two years after he painted “American Gothic,” Wood created a series of murals portraying Iowa farm life for a hotel coffee shop in Cedar Rapids, Iowa? 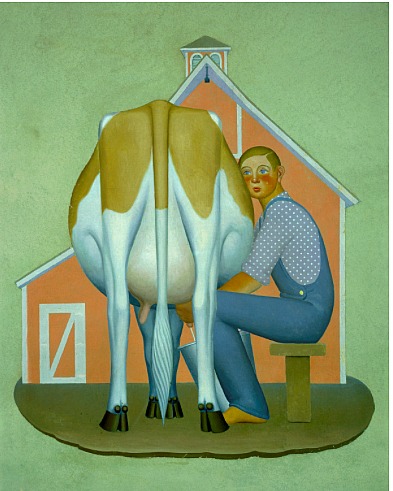 Like many artists struggling to make ends meet, Wood often veered from the path of fine art. He painted advertisements, sketched the interior of a mortuary for promotional flyers and served in the army as a camouflage painter.

And on more than one occasion he accepted commissions from Iowa hotels. This surprising detail makes the wide-ranging exhibition “Grant Wood: America Gothic and Other Fables,” on view at the Whitney Museum through June 10, an unexpected treat for hotel geeks.

Wood created “Fruits of Iowa,” a mural featuring seven towering panels of farm imagery, for the Hotel Montrose, a sturdy six-story brick and stone hotel that opened in 1906 on a prime corner of downtown Cedar Rapids. In 1917, the Montrose was snapped up by Eugene Eppley, a Midwestern hotelier with properties in Iowa, Ohio and South Dakota. He promptly poured a quarter of a million dollars (more than $3 million today) into upgrades for the Montrose, adding a seventh story, increasing the number of rooms to 193, installing more private baths and creating a ballroom.

He didn’t stop there. In 1932, Eppley commissioned Wood to decorate the Montrose coffee shop. The results included the three “Fruits of Iowa” murals of a rosy-cheeked farm family on view at the Whitney, among them “Boy Milking a Cow.” After the artist’s death in 1942, the Cedar Rapids Gazette reported that Eppley promptly touted the hotel’s “$50,000 Art Gallery Collection of paintings by the late Grant Wood.” 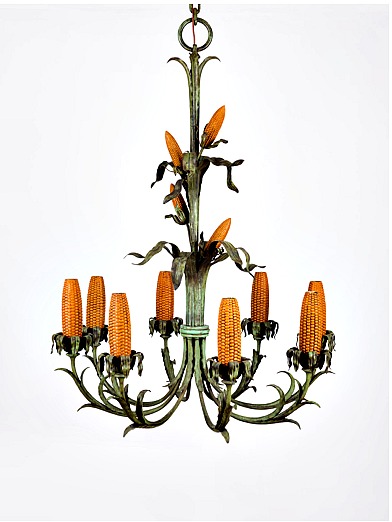 The Montrose murals were not Wood’s first hotel commission. Between 1925 and 1927, he designed dining rooms that came to be called Iowa Corn Rooms for the Montrose as well as hotels in Sioux City and Council Bluffs. The signature detail? Wood’s whimsical Corn Cob Chandeliers fashioned from iron, copper and paint. One of these beauties lights up a gallery at the Whitney.

The Montrose was demolished in 1988, a victim of high utility bills and low occupancy. As for “American Gothic,” it’s on view at the Whitney, on loan from its long-time home at the Art Institute of Chicago. And in case you didn’t know, Wood modeled the farmer and his severe-looking companion after his dentist and his sister.

Coming Soon: New Owners for The Plaza Hotel; What Will They Get for $600 Mi... Why You Should Find Out If Your Hotel Is Near a Construction Site Before You...
Scroll to top